It is understood that gaps in different spheres are pushing the microfinance sector into severe political risks
Dr. Saibal Paul

The Reserve Bank of India's (RBI) recent announcement on harmonising policies for regulated entities working in the sphere of microfinance is a welcome move. Andhra Pradesh (AP) and recently Assam have facilitated regulations in the microfinance sector. As evident, the AP ordinance has almost squashed the entire sector, a once-thriving industry, there are only 5 MFIs operating in the state now.

Operationally for MFIs, it's a herculean task to set up processes separately for each state, especially where local level registrations are mandatory. The lengthy turnaround time for application approval erodes the financial viability of the operations.

The provincial states are entitled to promulgate legislation on microfinance as it is considered money lending. As per the Indian Constitution, union government and state governments can enact laws separately on certain subjects and both can decide on others.

Despite having a strong objective of anti-moneylenders, microfinance is considered as a "money lending" activity and brought under the state list. However, 78% of the source of funding is from borrowings, of which 93% is from banks and DFIs, which are in the form of banks; 7% is from bulk lenders who also source mostly from the banks. Technically, microfinance should be dissociated from the category of "money lender" and brought under the union list, as "banking" and enact exhaustive law encompassing all entities catering to the poorer population.

Certain gaps and contextual limitations are keeping stakeholders confused, and issues being picked up by people with vested interests are drawing the sector into political risks where state government's power being invoked, proving to be a challenge for the sector.

The first gap is data asymmetry. As per the Credit Information Bureau (CIB) September 2020 data, banks are ruling the market, however, there is substantial data asymmetry. Societies, trusts, cooperatives and Nidhi Companies are almost out of the purview of the data set. However, according to the Ministry of Corporate Affairs, there are 245 Nidhi companies and there is a rough estimate of the presence of 50,000 credit cooperatives in India. 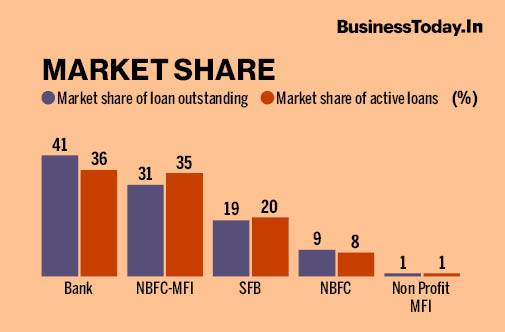 The second one is the gap in policy framework. In India, for microfinance operations, only NBFC MFIs and NBFCs are directly regulated by RBI; U/S 8 of the Companies Act, 2013, companies have special dispensation from RBI on registration; societies, trusts, cooperatives are not directly regulated but approved by RBI through other means. 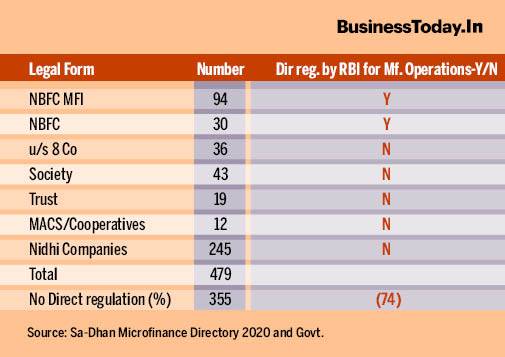 Considering the number of Nidhi companies (the number may be many folds more, there is no aggregation of numbers), around 74 per cent of institutions catering to the bottom of the pyramid is not under the purview of RBI, the principal regulator of India.

One contextual limitation is semi-literate, partially disoriented, and gullible customers. Due to their irregular cash flow, they do short-term planning and try to restrict cash outflow.

So, despite orientation at CIB, they think a possible repayment halt will better their cash management with a probable future advantage. This psychology of non-repayment is probably induced by the government's decision of frequent loan waivers.

Also, as there is no activity-based exhaustive policy, there is a possibility of non-NBFC MFIs giving loans to deviant clients. Again, often this complex situation is stormed by unaware media, mostly the local ones, both print and electronic. Without understanding the whole discourse, they only focus on the issues of pricing and over-lending. Social media cumulates the oblivion by propagating adverse news without checking the authenticity of facts.

This complex situation is drawing the microfinance industry into political risks which emanate from intertwined three levels.

Apparently, it gets visibility as a mass movement but in reality, it prohibits access to credit of the poor people. In many cases, it's the only source of credit for them.

Second - at the administrative level. The block development officers, district collectors, and local level administrators are not very oriented about microfinance. In many cases, they only understand the government-run savings-based self-help group model, not the mainstream microfinance model. The confusion escalates as the gaps in policy and data do not give them a comprehensive picture to understand, thus they start clamping the operations of MFIs.

The third and most important segment is the policymakers, both at the central and state level. This level consists of a mixed bunch at the awareness level. Their challenge is to bring a balance between dismantling disruptors (mostly anti-establishment local leaders), promoting financial products to unreached people/geographies, and not supporting publicly high rates of interest which will position them as adverse to the poor.

This is a very dicey situation that has two trajectories, the unaware policymakers trying to initiate hurdles in the sector, or the aware ones, taking refuge in the directives of RBI. Unfortunately, there is no inclusive or activity-based policy so in the end both types of policymakers, in order to insulate themselves from political hassle, try to promulgate state-level policies.

It is understood that these gaps in different spheres are pushing the sector into severe political risks. RBI should take cognisance of the situation and work together with sector representatives and government to eliminate the flaws and make the microfinance industry more vibrant to cater to the last mile financially secluded population.

(Dr. Saibal Paul is an international development professional, at present he is associated with Sa-Dhan, as Associate Director; all views are personal.)