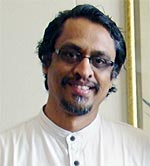 M S Sriram is an adjunct professor at the IIM Ahmedabad
The microfinance sector has multiple forms of organisations, with multiple orientations carrying out business. On the face of it, they do not look all that different in form and the way their services are delivered. There would be little difference in form between the activities and group meetings of a Samhita or a Cashpor group [not-for-profit operations] or an Aarohan and an Bandhan group. Then how are these fundamentally different?

I deliberately use the term Social Enterprises in the headline. Clearly there are two aspects to microfinance. There is  the social aspect which broadly encompasses the larger objective of providing access to financial services to the under-served, helping the poor to set up enterprises and join the mainstream economy on market based terms - bereft of 'charity'. And there is the enterprise element of microfinance, which looks at this as one more economic activity that provides a good return on investment and a good return on assets. Since people from the charity side are looking at lasting market based solutions it is an enterprise. Since the profit side is looking at moving beyond profits to make larger impacts, it is social as well.

The first benefit that the not-for-profits have is in signalling that their structure does not allow for distribution of profits.The other benefit of being a not-for-profit is moderation of growth. There is no incentive for promoters to accelerate growth for the sake of valuations or bottom line. Being social in nature, the organisations tend to look to solve more and diverse problems rather than just grow a single portfolio.

For instance in Sanghamithra Rural Financial Services on whose board I sit, we had a day long meeting to see if we had achieved our mission of convincing the bankers to lend to groups. While the general consensus was that indeed the microfinance space had fundamentally changed from the time we were set up and some of our objectives had indeed been achieved, there was also the feeling that there were challenges in more difficult areas [Gulbarga, Bellary in Karnataka] and more difficult client groups [senior citizens, sex workers] for whom providing financial services is indeed a problem. Thus by their very nature of looking for a problem to solve than look at "growth" as a problem, the not-for-profits create a positive image for the bankers and the regulators to be engaged with these organisations in a positive way.

There have been many not-for-profits which got "transformed" into for-profits because of growth imperatives. All the big players who are in the microfinance space and who are in trouble are the ones who followed the route of starting charitable organisations; started by being social, but ended up becoming crassly commercial or tilted more towards enterprises. These are the ones which did above the line skimming by taking fancy compensation for the MFI employees, and below the line skimming through special purpose vehicles that invested in for-profit operations. Clearly they have lesser credibility and a poorer image than those who started as pure for-profit enterprises. The change of stripes has eroded their credibility and brought their intent into question.

Even within the for-profit space - since it is a business which deals with the poor and the vulnerable - sending out signals that point to an approach that eschews making money from the poor becomes important. A down-to-earth Vijay Mahajan is respected for his "service" rather than a flamboyant Vikram Akula for his "enterprise". Infosys is loved and respected as a company because the executives do not flaunt their wealth [or rather flaunt their middle class attributes much more] than a Kingfisher Airlines and a Vijay Mallya. Therefore apart from the form of the organisation (preferably not-for-profit), it also helps if those in the microfinance business display a non-ostentatious lifestyle. These two put together open doors and offer patient and sympathetic opportunities to survive.

Even globally, the concerns of signalling continue. When Mexico's Compartamos, one of the largest MFIs in Latin America, was a not-for-profit, it was not really questioned much on its "sustainability" issue. The moment it became a bank, and particularly after it issued shares in the secondary market, several eyebrows went up. Fundamentally nothing had changed with regard to Compartamos vis-a-vis the clients. In case of Bolivia's BancoSol, the differences between the profit orientation and the social orientation became very sharp, with those with a social orientation moving back to a not-for-profit model leaving the people with commercial orientation to continue the mainstream banking operations.

Moving forward, it appears that the policy space as well as the commercial world will draw much from the not-for-profit examples. The not-for-profits are interesting because their downside of failure of a particular experiment is not massive. How the for-profit enterprises manage the conundrum between doing good while doing well is to be watched.

The author is an adjunct professor at the Indian Institute of Management (IIM), Ahmedabad and an expert in the Indian microfinance sector.