Naveen Mathur is Associate Director-Commodities and Currencies at Angel Broking says slow economic growth in US which is world's largest economy, increased concerns over the global outlook and exerted downside pressure on the markets

Non-Agri Commodities
Economic data from major global economies continued on a negative or mixed note in the last fortnight, much the way they had done the fortnight before. Further, slow economic growth in US which is world's largest economy, increased concerns over the global outlook and exerted downside pressure on the markets. In addition the geo-political tension between Russia and US kept a check on the markets. Further, US Federal Reserve continued with another round of QE easing by $10 billion in its meeting on 29-30th April 2014. However, towards the end of fortnight, markets got some relief on the back of estimates of decline in employment data from the US indicating progress in the world's largest economy. Coming to performance of non-agri commodities in the past fortnight, we saw that Spot Gold prices traded lower in the first half of last fortnight and traded near three week lows on continuous outflows from the ETF's. Besides, rising equities on account of good corporate performance reduced appeal for the yellow metal. In addition, the economic data sets released from US also raised prospects of growth in the US economy. However gold prices changed its course and rose as much as 1.1 percent to near $1,300 an ounce when Russia said it launched army drills near the border in response, raising fears that its troops would invade. In the second half, gold prices continued to decline on Strengthening US housing market sending signals to the investors that US is on a path of growth trajectory.

Also, Federal Reserve has reinforced its view in the U.S. economy's prospects and reduced its monthly bond purchases further by $10billion taking the total asset purchases to $45 billion. The metal came under pressure after the data from the U.S. showed that consumer spending recorded its largest gain in more than 4-1/2 years in March and factory activity accelerated last month, strengthening views the economy was regaining steam.

Taking cues from weakness in gold prices, spot silver prices largely traded on a negative note and declined by more than 1.5 percent in the last fortnight tracking weakness in the base metals complex except copper and nickel which gained by around 1 percent and 1.73 percent respectively. In addition, strength in the DX also pushed the metal lower. However sharp decline in prices were capped on account of better than expected Chinese PMI data which came at 50.4 for April versus 50.3 the previous month acted as a positive factor.

During the last fortnight, LME Copper traded higher by 0.5 percent as Chinese seasonal demand along with decline in inventories by around 4 percent supported gains. Also, positive manufacturing and employment data from the US acted as a positive factor. However, demand concerns owing to escalating tensions between Russia and the West as US and Euro Zone imposed sanctions on the former along with rise in risk aversion in the market sentiments exerted downside pressure on prices. MCX copper prices rose by 0.4 percent in last fifteen days despite Rupee appreciation and closed at Rs.409.05/kg as on 2nd May at 4:00 pm IST.

Nymex Crude oil prices declined by more than 3.5 percent as crude prices were on declining trajectory from second half of past fortnight as Crude inventories are at all time highs of 397.17 in history of the US. Hopes of rebound in Libya's exports and muted economic data from China exerted downside pressure on prices. However, sharp downside in prices were cushioned as the United States slapped sanctions on seven Russian government officials and 17 companies linked to Russian President Vladimir Putin last week in a fresh attempt to force Moscow to back down from its intervention in Ukraine. 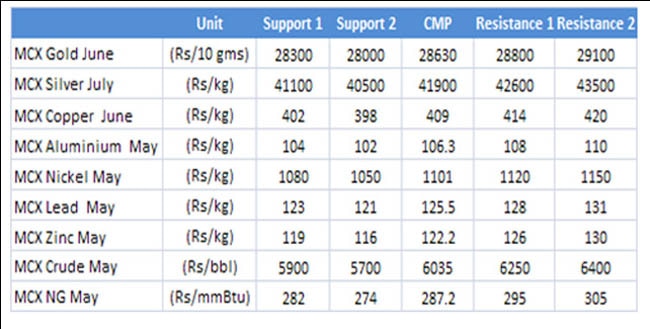 In the coming fortnight, we expect precious metals and crude oil prices to head lower on account of positive growth trajectory in the US economy as  Fed has reinforced its view that the US economy is in a bright spot and trimmed the bond purchases further by $10billion. Also, hopes of restart of Libya's crude exports much sooner than market expectations will pressure crude oil prices.

Base metals are likely to trade on a mixed note as US economic recovery will support an upside in prices. While on the other hand, strength in the DX along with Chinese growth concerns will cap sharp upside or even reversal in prices. 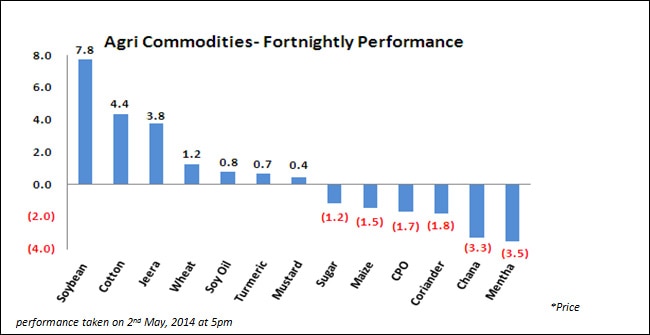 Agri Commodities
*Price performance taken on 2nd May, 2014 at 5pm

Agri commodities witnessed a good volatility over the last fortnight as the Indian Meteorological Department (IMD) forecast below normal rains for the 2014 Monsoon Season, which was almost in line with Skymet's forecast earlier this month. This, along with unseasonal rains and hailstorms last month in the major producing states like MP, Maharashtra, Rajasthan and Karnataka led to a rise in the prices.

IMD has forecast monsoon in 2014 to be below normal at 95 percent of average of last 50 years. It has also forecast a 60 percent chance El-Nino.

Among spices, jeera witnessed a sharp recovery from lower levels on the back of demand from the overseas as well as domestic markets and settled 3.8% higher. Prices were on a bearish trend over the last few months due to record output expectations coupled with arrival pressure of the new crop. Turmeric rose sharply n the first half of the fortnight due on the back of demand from North India as well as overseas markets. However, prices corrected from higher levels as demand declined at higher levels and managed to gain marginally 0.7%. Coriander declined 1.8% on rising arrivals of the new season crop. However, good demand supported prices at lower levels.

Among softs, Sugar consolidated corrected from higher levels losing 1.2% due to higher supplies and declining demand at higher levels. Lack of fresh export orders also kept prices under check. Prices gained earlier due to lower output forecast coupled with overseas demand and incentives by the government on export of raw sugar. Cotton futures recovered from lower levels and gained 4.4% on declining arrivals as well as IMD's forecast of lower than normal monsoon.

Chana futures remained under downside pressure on weak demand from the millers coupled with rising stocks on the NCDEX warehouses and increasing arrivals and settled 3.3% lower. 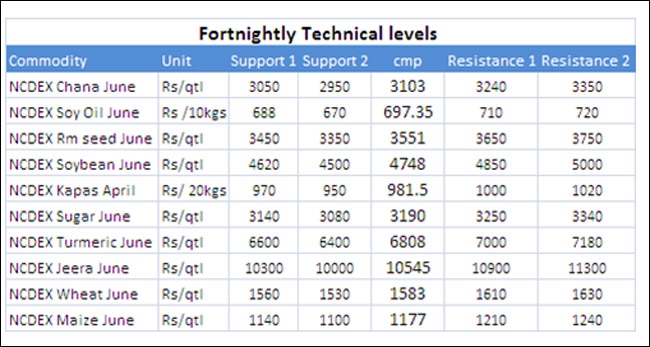 Most of the rabi commodities like chana, mustard seed and coriander and turmeric are expected remain under downside pressure in the coming fortnight due to arrival pressure. However, lower level buying may emerge at lower levels. The downside in chana may remain limited as prices are below the MSP and no sharp downside may be seen from here. Jeera may continue gain on overseas demand. Kharif commodities may find support at lower levels as fears of below normal rains are likely to extend support to the prices. Soybean may continue to gain due to tight supplies. However, profit taking may be seen at higher levels.

Prices may take cues from Advance Estimates to be released by the Ministry of Agriculture as well as any data on extend of crop damage due to erratic weather conditions earlier this year. Prices may also take cues from movement in the Indian Rupee.