News
OPINION
Columns
Rebooting Economy 69: What do workers gain from growth and profits?

Rebooting Economy 69: What do workers gain from growth and profits?

India does not have any idea about 94% of its total workforce, which works in the informal sector
Prasanna Mohanty

There is encouraging news from the corporate sector too. The listed companies booked "their highest ever profits in the midst of a severe lockdown" in the second quarter of FY21 and went to better their profits in the third quarter.

Logic and economic sense would dictate that these developments should cheer the Indian workforce battling unprecedented job and wage losses due to the economic disruptions for nearly a year now.

But that is far from being the case.

Notwithstanding positive growth in agriculture and allied activities in the first two quarters of FY21, rural distress continues. The latest wage data reveal that for the fourth consecutive month of November 2020 - up to which data is available - real growth in rural wages remained negative.

The following graph maps real growth in agricultural and non-agricultural wages and overall rural wages (combining all 25 rural trades) for men by taking their monthly averages. 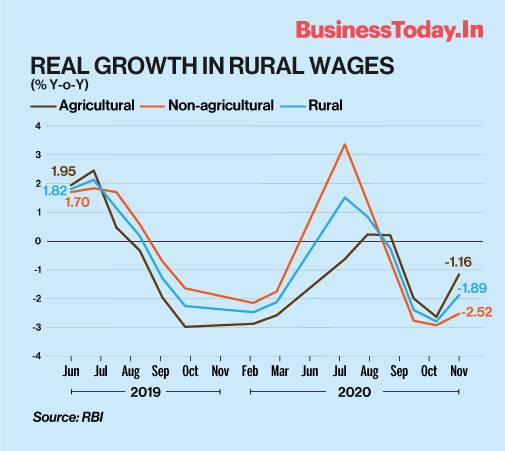 The first noticeable element of the graph is negative growth in all three for the four consecutive months of August to November 2020.

This fall in wages hurts a very large population of India.

They had witnessed a fall in wages earlier too - during September-December 2019 and January-May 2020.

There was a brief upswing in wages in June-July 2020. This was most likely caused by the rush for rural job guarantee scheme MGNREGS when the additional allocation of Rs 40,000 crore was announced in May 2020 as part of the relief packages, raising overall rural wage rates.

Now that the MGNREGS allocation for FY22 is Rs 73,000 crore, substantially lower than Rs 1,115,00 crore in the revised estimates for FY21, a similar upswing is unlikely to happen in the near future.

This is a clear indication that non-agricultural activities remain sluggish.

Since non-agricultural activities generate 77% of all incomes for rural households, as per the NABARD's "All India Financial Inclusion Survey of 2016-17 published in 2018 (the latest on the subject), this is bad news for the rural economy. (Cultivation contributes 29% and livestock 4%, taking the total to 23%).

Even if agriculture and allied activities grow at 3.4% (GVA) in FY21, it means little to rural workers. About 55% of agricultural workers are landless and survive through wage labour. A prolonged negative growth in agricultural and non-agricultural wages means further poverty and deprivation of a vast majority of the rural population.

The situation in the corporate sector is no less ironic.

The corporate sector is witnessing an unprecedented profit growth amidst the economic ruins. While the growth projection for FY21 is at an all-time low (of minus 7.7% in real GDP), corporate sector profits are touching new highs.

In December 2020, a leading business information company, Centre for Monitoring Indian Economy (CMIE) analysed financial statements filed by 4,234 listed companies for the second quarter of FY21 (July-September 2020) and said that they registered "their highest ever profits in the midst of a severe lockdown".

They did even better in the third quarter of FY21 (October-December 2020).

That meant little for their workers.

It said though the quarterly filings don't provide job data, analysis of wage bills indicated cuts in jobs and wages. It explained the logic: "A cut in the wage bill could mean a combination of layoffs and wage rate cuts. It is likely that the wage bill was contained largely through a cut in the wage rate for the permanent staff... The axe on headcount is more likely to be through a slashing of contractual labour. Payments made to contractual labour do not show up as wages on the company's financial statements since these payments are made to contractors... Hiring of labour through contractors has been on the rise in recent years..."

For the third quarter, it said, though in nominal terms, the wage bill went up, in real terms it shrunk for the third consecutive quarter (April to December 2020). The business continued to be sluggish, as a result of which employment had either stagnated or declined; listed companies continued to make record profits nevertheless, it added.

What the two instances (negative real growth in rural wages and all-time high corporate profits amidst job and wage cut) reflect is a clear disconnect between growth/profits and jobs/wages. It is the latter that distributes the fruits of growth/profit.

This, however, is not the end of irony; there is more.

In September 2020, a global payroll and human resources company ADP released its report "Global Workplace Study 2020" that looked at workplace behaviour of workers in 25 countries during the pandemic.

It listed Indian workers at the top in "resilience" and second in workplace engagement, indicating that Indian workers not only demonstrated a more positive mindset towards work but also capacity to work in challenging circumstances.

The report didn't reveal the composition of workers surveyed (more than 1,000 in each country) but going by their profile - 80% with college degree and more - many of them could be from the corporate (formal) sector.

While the listed corporate sector hasn't been quite generous, Indian workers have been treated far more shabbily by their government.

The government did nothing to protect jobs during the pandemic lockdown, which was untimely and unplanned, to begin with, and led to an overnight loss of millions of jobs. India was the only country that witnessed the distress migration of millions of workers. In sharp contrast, the OECD countries proudly declared that they saved 50 million jobs through their "Job Retention schemes". India didn't even track job loss, let alone provide unemployment allowance that the US continues to do. (For more read "Rebooting Economy XXIII: What stops India from taking care of its crisis-hit workers? ")

All that the government did was to allocate Rs 40,000 crore for low-paying (below minimum wages) menial work that the MGNREGS offers as a relief even during normal times because the prolonged rural distress and job crisis have not been addressed yet. It also announced a one-time allocation of Rs 10,000 crore for other rural jobs (under a new scheme called "Pradhan Mantri Garib Kalyan Yojana") for migrant workers, which would be discontinued in FY22.

India does not have any idea about 94% of its total workforce, which works in the informal sector. No effort has been made to determine how they survived the lockdown or what their financial status is. Multiple global estimates have said that 40-80 million Indians would slip into "extreme poverty" (per capita per day living expense of $1.9) due to lockdown. India did not try to assess it for itself or address it anyway.

It is also not known how many slipped into "extreme poverty" due to the demonetisation of 2016 (which too caused overnight loss of millions of jobs and businesses) and the subsequent economic slowdown either. (For more read "Rebooting Economy 63: Budgeting FY22 with critical information gaps ")

Here is yet another irony. The recent budget quoted the classic Tamil text Thirukkural to demonstrate the government's good intentions: "A King/Ruler is the one who creates and acquires wealth, protects and distributes it for common good" (Thirukkural 385).

Rhetoric apart, this quote is inappropriate because India is a constitutional democracy in which governments are elected every five years to work for people's welfare.