Rebooting Economy 70: The Bombay Plan and the concept of AatmaNirbhar Bharat

The Bombay Plan, authored by the doyens of industry in 1944 first envisioned state planning, state ownership and control of industries to make India "self-sufficient" long before Nehru's ideas took root

The Indian government not only proposes to de-nationalise public assets, but it also seeks a larger role for private wealth creators by giving them "as much opportunity" to turn India into AatmaNirbhar Bharat, as Prime Minister Narendra Modi spelt out at the sixth governing council meeting of Niti Aayog on February 20, 2021.

This completes a circle that began with the Bombay Plan of 1944 which had sought the exact opposite while envisioning a "self-sufficient" India (the concept of AatmaNirbhar Bharat then) after the end of the colonial rule.

The Bombay Plan of 1944 was authored by the doyens of industry at the time who sought a larger and stronger role for the government (state) by way of "state ownership", "state control" and "state management" of production; distribution; consumption; investment; foreign trade and exchange and wages and working conditions.

Also Read: Rebooting Economy 69: What do workers gain from growth and profits?

It proposed "a planned economic development" to "improve the standard of living of the masses"; reduce "disparities of income" and "inequalities" and make India "self-sufficient". "Nationalisation" of industries, "public supervision and control" of industries was very much part of its vision, including "all industries affected with a public interest, or capable of wielding monopoly power".

The authors were among the biggest names in the industry at the time: JRD Tata, GD Birla, Sir Ardeshir Dalal, Sri Ram, Kasturbhai Lalbhai, AD Shroff, and John Mathai.

The Bombay Plan of 1944 for India's planned development

The Bombay Plan provides the best argument against those who argue that Pandit Nehru alone turned India into a socialist-cum-mixed economy in which state-controlled means of production and distribution of goods and services, restricted private sector, thereby keeping India perennially under-developed.

The Bombay Plan had proposed all this and much more before Nehru unveiled his five-year plans and industrial policies, carving out a larger role for state/government.

Several economic historians have observed that not just the first three Five-Year Plans of India, but also the Industrial Policy Resolutions of 1948 and 1956 owe a significant amount of "intellectual debt" to the Bombay Plan by liberally using its prescriptions. Economist V. Ananth Krishna wrote in no uncertain terms that "the Nehruvian era witnessed the implementation of the Bombay Plan; a substantially interventionist state and an economy with a sizeable public sector".

Former Prime Minister Manmohan Singh too acknowledged its imprint on Indian policies and planning while addressing the centenary celebrations of JRD Tata in 2004. He said: "As a student of economics in 1950s and later as a practitioner in government, I was greatly impressed by the 'Bombay Plan' of 1944. In many ways, it encapsulated what all subsequent plans have tried to achieve..."

Yet, the Bombay Plan remains virtually unknown, with even professional economists not including it in their teaching materials as the 2018 book, "The Bombay Plan: Blueprint for Economic Resurgence", complained. The book was an attempt to fill this gap.

The Bombay Plan was actually titled "Memorandum Outlining A Plan of Economic Development for India", signed and circulated in two parts in January and December 1944, which generated widespread interest nationally and internationally for being the only vision document of its kind. At its core was the wellbeing of the masses. It became to be known after the city to which its authors belonged.

What made the doyens of industry who had made their fortunes fighting heavy odds during colonial rule seek state ownership, control, and management in which their own role was subsumed instead of seeking a larger share for them in running the economy that the present government proposes to do?

After all, in 1944 India was still under colonial rule and they could have bargained for more power and space vis-a-vis the new government of independent India.

Part II of the Bombay Plan explained its position on this in some detail (as about all it proposed).

It clearly spelt out "economic functions of the State" to include (i) ownership (ii) control and (iii) management of economic enterprises and then explained why: "A widening of the economic functions of the State in these directions (state ownership, control, and management of economic enterprises) is advocated on the ground that unrestricted private enterprises under the capitalistic system of production have not served the interests of consumers and the community generally as satisfactorily as it should have."

The Great Depression of 1929 - a classic case of economic crisis that unrestricted private enterprises cause - would have been fresh in the minds of its authors.

At another place, it said, "...we recognise that the existing economic organisation, based on private enterprise and ownership, has failed to bring about a satisfactory distribution of the national income". It also sought state control over private enterprises to check monopolies, profiteering, misuse of scarce natural resources without consideration for future generations, and limiting rights to private property. In its scheme of things private enterprises played a role but a secondary one to state/government in running the business.

The industrial leaders who authored the document clearly had no illusions about private wealth creation and its distribution. Contrast the current rhetoric about "government has no business to be in business" and "wealth creators (in private sector) are important for India; only then can wealth be distributed, and jobs be generated".

But these were only one part of its arguments.

There are many other significant ones like (i) "the State belongs to the people and is but a means of securing the fulfillment of the individual's rights" (ii) "planning is not inconsistent with a democratic organisation of society" and (iii) "the distinction between capitalism and socialism has lost much of its significance from a practical standpoint" (having mentioned the communist Soviet's rapid industrialisation under state planning and the failures of the capitalist laissez-faire to be fair to people or distribute national income).

Economists and experts have explained why the Bombay Plan sought more power for state/government, which is as relevant to India now as it was then.

Economist Ajay Chhibber listed some of these in the 2018 book on the Bombay Plan mentioned earlier: (a) amazing ability of the Soviet Union to industrialise rapidly from a backward to egalitarian industrial society (b) perilous state of Indian economy after 200 years of British rule that consciously de-industrialised India and left a bulk of population at or below poverty line (c) all government, even the US, had taken a larger role in running the economy during the World War (d) fear of communism, insurrection spreading in India and expropriation of private property and (e) state alone had the capacity and broader organisational ability to move India forward.

Two other experts, Tulsi Jayakumar and R Gopalakrishnan (in the same book) pointed at the industry leaders' realisation that only a state/government could (i) mobilise huge financial resources needed to develop basic industries and meet social sector needs of India; undertake deficit financing and prevent foreign economic imperialism even while borrowing from abroad and (b) reduce inequalities by owning and controlling economic activities.

Here are two interesting tidbits that hit the headlines recently.

Discussing agricultural prices, the Bombay Plan said, "the government should adopt a policy of fixing fair prices" for principle agricultural crops to check price fluctuations and that "it would be necessary for enforcing these prices to build up adequate commodity reserves".

Do these descriptions fit minimum support prices (MSPs) at the core of the current farmers' agitation?

The current policy framework seeks the opposite. Firstly, it seeks to hand overpricing of agricultural produce to private markets outside the state government-run APMC mandis. Secondly, it has relaxed private hoarding norms for agricultural produce and outsourced maintenance of food stocks to corporate giants (for which the Food Corporation of India has already signed agreements with a fixed and guaranteed rent for 30 years, which is inflation-proof and entails periodic revisions.

The second interesting element is also in the context of agricultural pricing.

The Bombay Plan said "imports should be regulated by means of tariffs or by fixing quotas" to prevent depression in the prices of specific agricultural commodities as a result of foreign imports.

The current AatmaNirbhar Bharat seeks to regulate import (import substitution) for another reason: to protect and promote local business interests that have saddled India for decades (until the 1991 liberalisation) with shortages and shoddy products at high prices. Those who profiteered from import substitution then stand to gain again. The losers are the masses.

Growth potential of the Bombay Plan

The Bombay Plan had a very large canvas and stressed on state investment in many areas, particularly to eradicate poverty and improve the health and education of the masses. Its close resemblance with the subsequent Five-Year Plans, industrial policies, and state interventions in running the economy - damned as "Nehruvian socialism" - is obvious and undisputed.

Hence, using the growth (GDP) and income inequality numbers of the Nehru-era (Nehruvian socialism) as a proxy for the Bombay Plan, here is what emerges.

What was the GDP growth during the Nehru-era?

To understand the significance of this number (4.1% growth) one would have to look at the corresponding numbers for the previous and subsequent periods.

For the previous periods (pre-independence), the most credible estimate that professional economists and other experts use is from "The National Income of India in the Twentieth Century", a book written by economist S Sivasubramonian and published in 2000.

India has not seen such a quantum jump in the post-Nehru era.

The highest levels of GDP growth have been seen in the new millennia. The average annual growth in the past 15 years of the 2011-12 GDP series is 6.7% (constant prices). This is a jump of 1.6 times over the Nehru-era growth.

To achieve the Nehruvian quantum jump, the GDP would have to grow at an annual average of 19-21% for at least 13 years.

That seems too far-fetched even to dream.

In FY20 (before the pandemic struck) India grew at 4% - less than the annual average growth of the Nehru era.

This is not the only lesson for those who dismiss "Nehruvian socialism".

The high GDP growth of the Nehru-era was marked by high growth in income equality too.

What is commonly known is that this book showed that the income share of the bottom 50% of Indians climbed up in 1950s, touched its peak of 23.6% in 1982-83, and then came crashing down to 14.9% in 2014-15. The authors explained that this was caused by the free-market neoliberal economics (radical capitalism) adopted by India, starting with 1980s and then the big push in 1991.

Here is another shocker from the same book.

The following graph, taken from their book, shows how the middle class' income share (red line) kept rising until 1990 and then crashed and fell below that of the top 10% (blue line) after 2000 - even as India was registering its highest ever GDP growth in post-independent history (annual average of 6.7% since FY06). 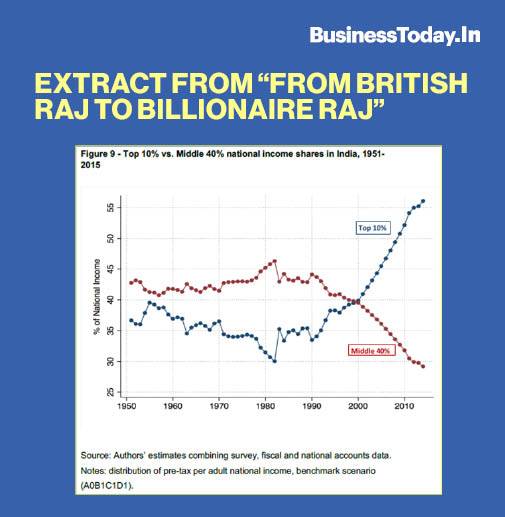 Notice how, by 2015 (the last year in the graph), the income share of the top 10% (blue line) zoomed like a rocket and created a yawning gap too huge to be bridged so long as the same free-market neoliberal economics that caused it continues to India's economic policy.

The best years of growth in national income and income share of the bottom 50% and the middle 40% happened during the "Nehruvian socialism" period.

As a proxy, that is a measure of the potential the Bombay Plan's vision embodies.

Next time "Nehruvian socialism" is condemned and blamed for all that ails the Indian economy and its people, a study of the Bombay Plan of 1944 and that India's growth and income shares during that period should be recommended.