The largest buyback was of Cairn India for Rs 1,225 crore. As per Sebi's new norm, the buyback was restricted to six months from 12 months.

Mahesh Nayak, senior associate editor
To safeguard the interest of small shareholders and check manipulation of share prices by companies, the Securities and Exchange Board of India (Sebi) had cracked the whip by amending the buyback norms in August 2013.

The largest buyback was of Cairn India for Rs 1,225 crore. As per Sebi's new norm, the buyback was restricted to six months from 12 months. 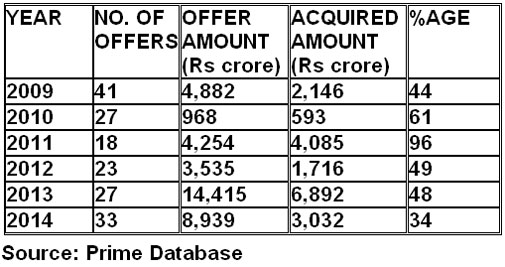 The most important reason for the downfall in the number of buybacks, open offers and delisting was the surge in the market barometer, with the BSE Sensex scaling higher by 30 per cent in 2014.

This also acted as a deterrent to open offer. According to Prime Database, the number of open offer deals dropped from 81 in 2013 to 61 in 2014.

The reason for the lower value was because of the base effect, as 2013 saw the Rs 29,220-crore open offer of Unilever PLC for Hindustan Unilever.

The largest offer was by Relay for United Spirits for Rs 11,449 crore.

The other two big open offers were GlaxoSmithKline for GlaxoSmithKline Pharmaceuticals for Rs 6,389 crore and Independent Media Trust for TV18 Broadcast for Rs 1,348 crore.

Going ahead, with the stock market scaling higher, the buyback of shares could remain low.

But with the financial health of many in corporate India not that good, the sale of distressed assets is expected to see a rise. 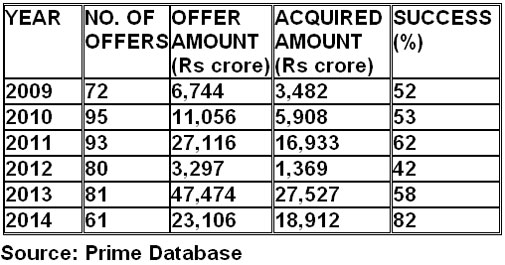