We want to be a leader in the programmable world, says Nokia CEO Rajeev Suri

Nokia CEO Rajeev Suri speaks with Business Today on the Finnish company's transformation and the challenges ahead. Over the past year and a half Finnish company Nokia has transformed itself. It sold its struggling handset business to Microsoft and focused on its networks and technology businesses. In April 2014, it named Rajeev Suri, a company veteran, its new CEO. Suri had earlier turned around Nokia's network equipment venture with Siemens. After becoming Nokia CEO, he has led the acquisition of Motorola's network business, bought Siemens' share in the company, and started a 25-point restructuring that included layoffs, cost cuts and factory shutdowns. He is building Nokia into a software and services company that will compete with the likes of Ericsson, Huawei and Google. During a recent visit to India, Suri spoke with Sunny Sen on Nokia's transformation and the challenges ahead.Excerpts:

Q. Tell us about the new Nokia you are heading.

A. Three things have happened over the last several quarters. One is that the networks [business] we once called NSN is [now] called Nokia Networks, and the turnaround really took shape so we moved from the end of 2009 (where we had close to break-even profitability on a non-IFRS basis) and to about 10 per cent [growth] in 2013. That is one event that has changed the perception of the networks business. Second is the purchase of the Siemens share - we took full control of the whole business. And third is the sale of the devices business. If you contrast the first quarter of 2014, on a full basis including the devices business, revenue was higher but Nokia made zero per cent operating margins. The same number if you take on continuing operations, without the devices business, we made 11.4 per cent operating margins. It's a stark contrast from burning cash to strong cash generation.

Q. How was Nokia 10 years ago versus today?

A. It was a very different business 10 years back. In the recent past the transformation is proving to be quite successful. What is the new Nokia? We have Nokia Networks, which has a strong foundation and went through a drastic restructuring, but now we are transforming the company into a software and services firm. The second part is Nokia Technologies, which holds the intellectual property of the group. We have over 42,000 patents. On the technology side, we have three kinds of businesses. We have the licensing business, which is lucrative. We have spent 50 billion euros over the last two decades [to create intellectual property]. In Nokia Technologies we also have the opportunity to licence the brand in the future. The third business is 'Here' in the mapping space. It came from Navteq [and there are] a bunch of other acquisitions. 'Here' is a very interesting intersection of mapping and the automobile space.

Q. How difficult was it to announce so many job cuts, and make other radical decisions?

A. It was very difficult. Nobody wants to announce job cuts... I started as the CEO of NSN in October 2009. It was a real dire situation. We lost about 20 to 21 per cent of our revenue that year. There was a financial crisis. We made 28 million euros operating profit, so kind of break-even on a non-IFRS basis. It was a question of how we should try to survive, and shape the future where we could thrive in the long term. At that time revenue was crashing, and then the contrast with 2013 where we had a billion euros of profits. It is a huge multiplication of where we started from. So it's never an easy decision to get rid of jobs. Nobody wants to come to work and be a cost cutter. But it's important to take the right decision to save the company and it's important to save the other employees. But we didn't just cut jobs. Our net reduction was from 75,000 to 48,000 employees. Some were because of divestitures. We called those businesses [like the fixed wireline business] non-core, and we focused on mobile broadband and services. We sold them to companies that made these non-core businesses their core. 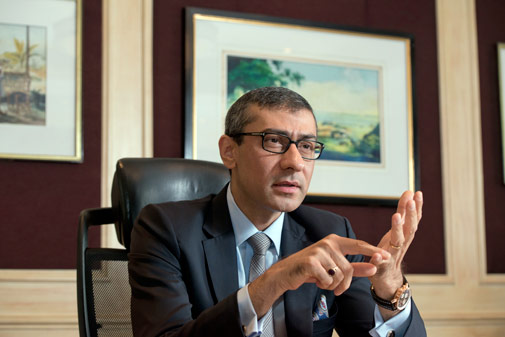 Rajeev Suri, CEO, Nokia
Q. Did you take cues from any leaders?

A. You don't get trained to do this kind of work. What is important is that you hire the right kind of people... I have spent 19 years in Nokia and one guy who deeply influenced me was Jukka Auramo. He was the guy who hired me. I learnt from him how to inculcate the values of the company.

Q. How do you see Nokia without handsets?

A. There is a huge opportunity in the technology side and 'Here'. We work with 90 per cent of the operators, but we need to do more in the US on our network side. 'Here' is one of the top two mapping players. Google is the other. 'Here' is an agnostic player. We are not tied to an operating system. You don't have to worry that we will support only one operating system. On the business model we are more flexible than other players - if you just want to buy mapping [without the other solution], we are fine. You can buy some other stack, and we can also do the whole platform. We don't have a 'take it or leave it' model.

Q. Why are you placing your bet on mapping?

Q. Are you now comfortable in your current role?

A. It will take some time, because it is not only about guidance but also about what Nokia might do in the future. We don't have to just do network. We want to be a leader in the programmable world.