Barely had the noise about the Ratan Tata-Cyrus Mistry spat started receding into the background, when the NR Narayana Murthy and other founders vs Vishal Sikka and the Infosys board has broken out. 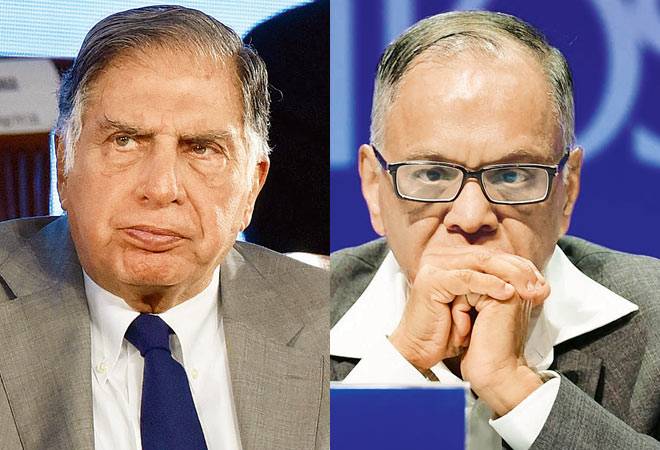 Prosenjit Datta, Editor, Business Today
Barely had the noise about the Ratan Tata-Cyrus Mistry spat started receding into the background, when the NR Narayana Murthy and other founders vs Vishal Sikka and the Infosys board has broken out. In the first case, the accusation of Tata Sons while ousting Mistry was his supposed lack of performance as well as corporate governance lapses. In the Infosys case, while the founders have not said anything about the performance, they have questioned the corporate governance standards being followed post their exit. There are both similarities and differences about both cases.

In the Tata Sons vs Cyrus Mistry case, the former questioned the performance of the latter even while analysts and the stock market performance showed that Mistry had not done too badly in the period he was in charge. In the Infosys case, NR Narayana Murthy and his co-founders and ex-employees (including Mohandas Pai) have refrained from saying anything negative about Sikka directly, but have raised questions about payments made to the former CFO, when the latter was exiting the company. They also raised other issues, including the way the pay and renumeration committee was acting. In both cases, directors were divided.

In Infosys, the chairman and most of the directors have come out in support of Sikka. Also, analysts point out that his performance has not been bad despite adverse external conditions. In the case of Cyrus as well, many independent directors of different companies had reiterated their faith in his leadership during the initial board meetings. (Though he resigned from them later). Both Cyrus Mistry and Vishal Sikka were handpicked successors chosen after a long search.

One big difference is the shareholding pattern. In the case of the Tatas, the Tata Trusts (which were headed by Ratan Tata) held over 60 per cent of Tata Sons. Tata Sons, in turn, held between 30-40 per cent in most group companies. Tata Sons is very clearly classified as promoter of the various group companies.

In the case of Infosys, the founders currently hold 12.75 per cent together, which gives them significant say, but not the kind of control that a higher shareholding would. And a few years earlier, they had also written to the Infosys board to say they should not be classified as promoters though they still remain "promoters" as per latest records to all.

It is easy to take a black and white view of both spats. You could either take the view that Ratan Tata and Narayana Murthy have built the Tata group and Infosys respectively, and therefore they cannot sit back and see the organisation values being distorted by successors. The fact that they are also significant stakeholders (Ratan Tata as the chief trustee of the Tata Trusts) give them a right to raise questions and seek course corrections from the management.

Equally, it has been pointed out that both could be cases of people refusing to let go and trying to do backseat management even after retirement. Ratan Tata has been accused of interfering with the management and now the founders of Infosys face similar accusations.

The fact that Narayana Murthy wants the management and the board to consult the founders and other former officials from time to time for advice, makes him particularly open to criticism. After all, he did come back and take over reins of the company from his chosen successor and one of the founders already earlier. After that, he stepped back and allowed a new independent chairman to head the board. But now he wants to nominate a co-chairman.

Both cases raise interesting issues. On how to give up control. On board battles. On choosing what is best for the company.

The first issue is that it is always hard for someone who has built a company to give up all control. It does not matter whether he is giving up charge to someone in the family or to a professional manager. In the past, Ranbaxy and Apollo Tyres both saw a battle for control between father and son. (Going back even earlier, Nusli Wadia had to fight his father when the latter wanted to sell of Bombay Dyeing).

In the case of professionals taking over too, there have been cases much before Tata-Mistry and Infy founders-Vishal Sikka about promoters/founders growing disenchanted with the way the company was being handled. However, once a person has retired and stepped back, asking to be consulted on decisions being taken by management by virtue of having run the organisation in the past does not make sense.

On the other hand, there is the shareholding issue. Both Tata Trusts (and hence Ratan Tata) and the Infosys founders have significant shares in the companies. Therefore, they have every right to nominate directors, and keep a close watch on the way the companies are being managed.

However, the way this is a nuanced role. First, performance measures need to be monitored, especially measures that directly affect shareholder return. Two, the corporate governance needs to be monitored to see that it passes the board test and takes into account all laws and regulations of the land.

Beyond that though, it becomes a case of personal preferences. Was the exiting CFO in Infosys given too high a severance bonus? Entirely depends on what filter one is looking through. Compared to severance packages of former employees in the times of Narayana Murthy, probably. Compared to current practices of global IT services firms, probably not.

The Economic Survey and the 'Twin Balance Sheet Problem'