Now that a decline in private consumption is pulling down economic growth, the focus needs to shift to improving wages and other measures to spur demand and savings, which does not seem to be happening now

Private consumption has been the main driver of India's growth, contributing about 60% to GDP, and its fall is dragging economic growth further down.
Prasanna Mohanty

That the Indian economy is slipping into a recession is quiet apparent. The real GDP growth has gone down from a peak of 8.2% in 2016-17 to 6.8% in 2018-19, with the fourth quarter of 2018-19 dipping to 5.8%. The first quarter of 2019-20 is expected to dip further to 5.6%. Nor for that matter the fall in private consumption, which has gone down since the second quarter of 2018-19. Private consumption has been the main driver of India's growth, contributing about 60% to GDP, and its fall is dragging economic growth further down.

Since consumption expenditure is directly linked to income, especially for the lower and middle income working population forming the bulk of population of India, the imperative is to improve their wages to spur consumption demand.

Wage growth is also linked to savings and investment. The Economic Survey of 2018-19 gives the example of China, where higher wages drove up savings rate, to argue for well paying jobs in India and an effective minimum wage regime across the country. It notes that gross savings have fallen from 31.1% of GDP in 2015-16 to 30.5% in 2017-18 - entirely contributed by the household sector savings, which declined from 23.6% of GDP in 2011-12 to 17.2% of GDP in 2017-18. With this decline, investment rate has gone down.

The SBI's latest study, Root Cause of the Current Demand Slowdown, says the reasons for the current slowdown are both structural and cyclical, apart from global uncertainties. Among the structural factors, it holds a substantial decline in both urban and rural wage growth as the "most crucial" one.

It says both urban and rural wages were growing in high double digits until a few years ago. Growth in urban wages (using corporate wages as a proxy) peaked at 20.5% in 2010-11 and then went down to single digit in 2018-19 (as companies went for cost cutting "in the midst of a massive deleveraging cycle"). Similarly, rural wages peaked at 27.7% in 2013-14 and went down to less than 5% in last three fiscals. It explains that this high growth phase was unsustainable (a deadly cocktail of wage-inflation nexus). 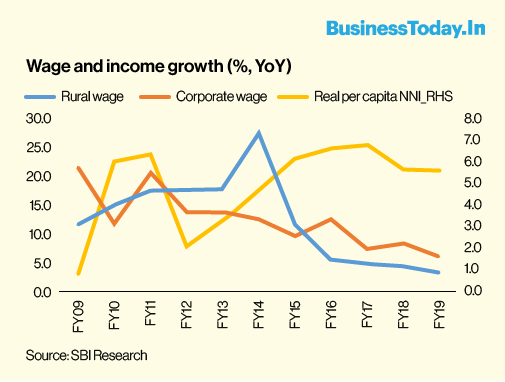 This decline in wages hit private consumption due to stagnation in income and household savings declined, it concludes.

A 2018 RBI's working paper, Rural Wage Dynamics in India: What Role does Inflation Play?, too had pointed out that rural wages decelerated significantly after a phase of high growth. The deceleration began after November 2014 and was marked by "low inflation occasionally surpassing growth in nominal wages, pushing real wage growth to the negative territory". This phase has been labelled as a period of "rural distress".

The paper says two major factors that drove high rural wage growth between 2007 and 2013, namely, implementation and quick progress of the MGNREGS and a healthy growth of the construction sector. The significance of both "weakened" later. It adds that subnormal monsoon years of 2014-15 and 2015-16 weakened agriculture growth negatively, impacting rural wages. Though rural economy saw some revival in 2016-17 due to normal monsoon, it did not provide a significant boost to the agriculture wages.

After a couple of better years, agriculture growth slipped in 2018-19, entering negative territory in the last quarter of 2018-19.

Another factor that has held back wage growth is denial of workers proper compensation. The ILO's 2018 India Wage Report says wages have not kept pace with labour productivity. Average labour productivity (as measured by GDP per worker) has increased more rapidly than real average wages and labour share (proportion of national income which goes into labour compensation, as opposed to capital or landowners) has declined from 38.5% in 1981 to 35.4% in 2013. It cites lack of data to map the labour share to more recent years.

It is quite apparent, and indeed as the SBI's study shows, one of the major tasks of the government would be to design appropriate macroeconomic responses to check the sharp decline in wages or income levels of working population to boost consumption and also savings rate to propel growth.

One policy response in recent times is the enactment of the Wage Code 2019 to universalise a statutory minimum wages. But the Code's design leaves gaping holes by not providing for a formula for fixing minimum wage, nor does it address equal-pay-for-equal work mandated by the Supreme Court in 2016, which was later extended to cover temporary employees too.

Equal-pay-for-equal-work is significant because of growing contract work even in government and PSUs, which is low-paying, and a huge disparity in wages of formal and informal sector jobs. A 2019 ICRIER study found real wages of directly hired workers to be, on average, one-and-half times that of contract workers in the past one decade. The Economic Survey of 2015-16 found wages in the formal sector to be, on average, more than 20 times higher than that of the informal sector.

In 2017, the government had set up an expert committee to fix a national floor rate of minimum wages. It proposed Rs 375 per day (Rs 9,750 per month) as the statutory minimum, irrespective of sectors, skills, occupations and rural-urban locations, for a family of 3.6 consumption units, and an additional house rent allowance up to Rs 55 per day for urban workers.

But the Union Cabinet set it aside and raised the existing national minimum wage by Rs 2, from Rs 176 to Rs 178, ignoring the "lighthouse effect" of a universal minimum wage the Economic Survey of 2018-19 talked about - minimum wage acts as a benchmark that pulls up wages in low-paid and informal sector by enhancing bargaining power of vulnerable workers.

The ILO's 2018 report had also suggested policies to enhance wages and collective bargaining power so that wages grow in tandem with labour productivity, more so since India relies on progressive increase of domestic consumption by lower and middle income groups as a key factor in overall aggregate demand.

The Wage Code 2019 does precious little.

The PM-Kisan scheme, which proposes an income transfer of Rs 6,000 per year to all farmers, could be seen as a helping hand but this scheme leaves out from its cover the most vulnerable and numerically bigger group - the landless agricultural labourers who constitute more than half, 54.9% (or 144.3 million), of the total agriculture workforce in India.

The Economic Survey of 2018-19 had suggested making the MGNREGS more efficient in targeting areas of low consumption expenditure where demand for such work is higher. So far, little attention has been paid to the MGNREGS. It is all too well known that the MGNRGS has consistently suffered from insufficient fund, delayed payment and lower than minimum wages with ridiculously low wage hikes - in 2019, six states/UTs saw zero hikes (similar was the case in 2018 too), four others had a hike of Rs 1 and Rs 2 each and six other states had a hike of more than Rs 10, up to a maximum of Rs 17.

Job creation - a wealth redistribution mechanism - is another neglected area. First the government delayed releasing the PLFS report of 2017-18 that mapped employment level after 2011-12, and then ignored it. The report shows unemployment rate hitting a 45-year high and more than half the working age population (LFPR of 49.5%) out of the labour market because there are simply no jobs.

The government remains unmoved and the job crisis remains unacknowledged even while the auto sector is rapidly shedding jobs. With this state of affairs, it is anybody's guess when the economic outlook would look up, income level of working population increase and consumption demand and savings go up.