The first of its kind study, published by city based Society for Social and Economic Research (SSER) reveals that the situation was not better in the case of some other key Rabi crops also 1.32 lakh tonnes of wheat was sold in the mandis across India during the first 21-day lockdown

The first of its kind study, published by city based Society for Social and Economic Research (SSER) reveals that the situation was not better in the case of some other key Rabi crops also. In addition to wheat, the study covers chickpea (chana), mustard, potato, onion, tomato and cauliflower.

Compared to the quantity sold in 2019, the arrivals in 2020 were also only 6 per cent for chickpea and 4 per cent for mustard. The situation of perishables that the mandis had prioritised during this period, was better, though the drop in arrival of commodities was large. For instance, the drop in arrivals was very large for onions (70 per cent) and potato (59 per cent). In case of tomato, arrivals during the period of lockdown were 26 per cent less than the arrivals in the same period last year. The shortfall was lowest (11 per cent) in case of cauliflower.

The researchers have analysed quantitative evidence from 1,331 mandis to show that over the first three weeks of the COVID-19 lockdown, a large number of agricultural markets were not operational. In the markets that were operational, arrivals of key agricultural commodities fell very sharply. It noted that a large number of mandis did not have arrivals of wheat, chickpea and mustard throughout the 21-day period. For example, wheat was sold in only 264 mandis during the period, while in the same 21-day period in 2019, wheat was sold in 688 mandis. During the 21-day period of the first phase of the lockdown, chickpea was sold in only 174 mandis and mustard was sold in only 152 mandis, the study said.

A disruption of 21 days in being able to sell their crops would have resulted in massive losses to farmers, in particular, to producers of perishable crops, they conclude.

In a joint statement, Ashok Dhawale, president and Hannan Mollah, general secretary, All India Kisan Sabha said the dismal situation has arisen because of a total lack of preparation and planning by the BJP led Central government before the lockdown was imposed. "The threat of COVID-19 pandemic was known for about three months in advance. However, this time was not used for any preparation or planning to deal with the imminent crises that the country was facing", they. 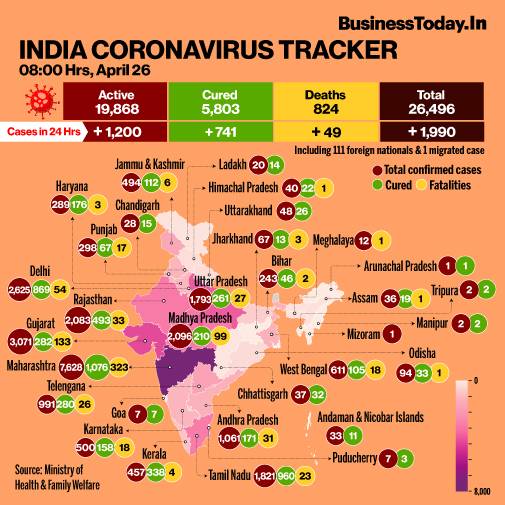