ID. Crozz's battery can be charged up to 80 per cent in around 30 minutes and offers a driving range of 500 km 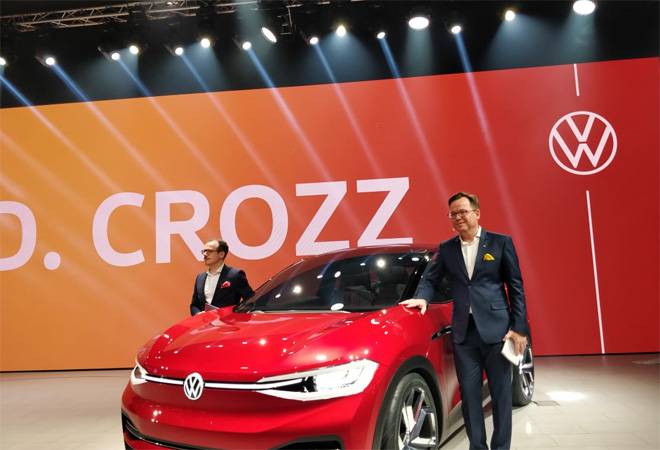 Steffen Knapp, Director, Volkswagen Passenger Cars, says, "We, at Volkswagen, take immense pride in showcasing our best technology to the Indian customers through the ID. Crozz & Race Polo. The two are symbols of Volkswagen's ground breaking and innovative technologies that continue to offer Volkswagen's core DNA of safety, build quality and fun-to-drive experience."

The ID. Crozz is the company's electric concept based on its Modular Electric Drive Matrix (MEB) for India and has features of both SUV and Coupe.

"The ID. Crozz is a true representation of Volkswagen's capabilities in developing electric vehicles. As an organisation, we have committed ourselves to the Paris Climate Agreement of 2015 and intend to be a completely carbon neutral brand by 2050," adds Knapp.

ID. Crozz's battery can be charged up to 80 per cent in around 30 minutes and offers a driving range of 500 km.

Knapp added, "Globally, as Volkswagen Group, we're investing EUR 33 bn. in the development of electric vehicles, with nearly 1/3rd the investment by brand Volkswagen. The ID. model family comprises of a range of vehicles across segments, starting with the recently introduced ID. 3 to the ID. space Vizzion."

The ID. Crozz has an all-electric drive and develops 225 kW of power. The concept car has a top speed of 180 kmph.

ID. Crozz also features an illuminated panoramic roof, which creates ambient lighting both inside and outside the car.

Volkswagen's new Race Polo gets its power through a four-cylinder TSI engine. The car delivers 210 +20hp (push to pass active) and a 320 Nm of torque.

Sirish Vissa, Head of Volkswagen Motorsport, about the Motorsport in India, said, "We are thrilled to bring the race version of the Polo back to the Indian racing circuit, enabling our Indian drivers to experience this powerful hatch."

Race Polo is paired to a six-speed sequential gearbox with a limited-slip differential and uses an electronic shift actuator for quick gear shifts. In terms of safety features, the car sticks to the international standards of motorsport safety systems.