Bajaj Chetak electric scooter unveiled; to go on sale from January next year

The electric Bajaj Chetak scooter will initially be available only in Pune and Bangalore. The company did not divulge the price of the vehicle yet but managing director Rajiv Bajaj said it would be priced competitively 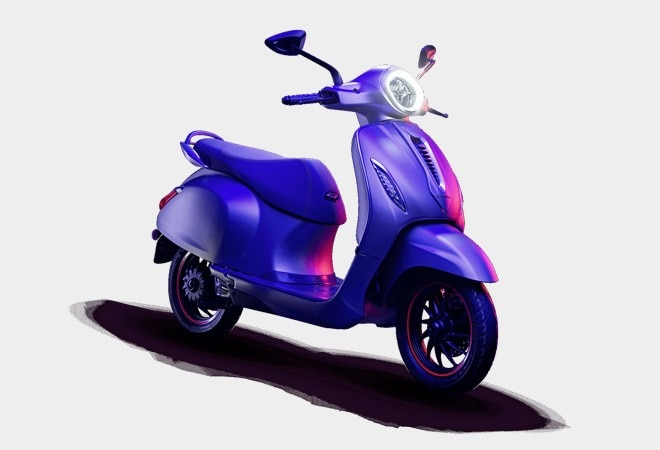 Homegrown two-wheeler major Bajaj Auto on Wednesday unveiled the electric Bajaj Chetak scooter that is based on the same iconic vehicle that ruled the Indian two-wheeler landscape for three decades between 1972 and 2006. With this, Bajaj also re-entered the scooter segment, a category it had ruled for much of the 70s and 80s, but one it had relinquished in 2006 as it shifted its focus purely to motorcycles. The electric Bajaj Chetak will go on sale from January next year and will initially be available only in Pune and Bangalore. The company did not divulge the price of the vehicle yet but managing director Rajiv Bajaj said it would be priced competitively.

While a number of new entrants and start-ups, like Ather Energy, Revolt Motors, Okinawa and Twenty Two Motors, have launched electric two-wheelers in the last 2 years, Bajaj is the first established mass market two-wheeler manufacturer to foray into this segment.

"We are engineers who do our own work. We are not a battery or a steel maker or a failed two-wheeler company. We are a company with a very rich past, a strong track record and a rich legacy. It is this credibility that gives us a solid foundation to make a foray into the future," Bajaj said. "Sometimes when it comes to creating new things there is anxiety whether it will work. In the context of EVs the question is on whether the customer is ready, in charging infrastructure, and whether it is viable and practical. Nevertheless, our belief is if we are not the first or at worst second to the market then we will lose the market forever. It is with this attitude that we have decided to move into the future of EVs with the Chetak."

At its peak, the Chetak enjoyed unprecedented popularity with waiting periods exceeding 10 years and a resale value greater than its purchase price. In its 34-year stint, more than 1.3 crore Chetaks were sold in India. In the new avatar, the timeless design of the vehicle has been updated with features like LED headlight with DRLs, electronic switches, sequential scrolling LED blinkers and a large digital console that intuitively displays vehicle information with crisp clarity.

At the heart of the new Chetak is an IP67 rated high-tech Lithium Ion battery with NCA cells. There are two driving modes on offer - Eco and Sport, with a range of 95 kilometer and 85 kilometer respectively. The battery is charged using a standard household 5-15 amp electrical outlet. The on-board Intelligent Battery Management System (IBMS) controls charge and discharge seamlessly. Additionally, Bajaj is also offering a home-charging station at a nominal cost.

The Indian government has been pushing the automobile industry towards electric mobility and a policy to move to 100 per cent e-mobility for two wheelers between 2023 and 2025 was also mooted earlier this year. It was however, disbanded following intense pushback from the industry. Bajaj was at the forefront in that.

"My only disagreement (with Niti Aayog) was when a policy was proposed for a very rapid conversion to 100 per cent EVs by 2023 and 2025. Thankfully that prospect seems to have faded. But after that brahmastra was sent, 50 per cent of my thinking time was occupied by EVs since June 21," Bajaj said. "If 50 per cent of my mind is on EVs today, in reality too it will be 50 per cent soon. We are constantly trying to align ourselves with the government's policies."

Minister for road transport, shipping and MSME, Nitin Gadkari, who was the chief guest at the unveiling, said the intent of the government is merely to push the industry towards e-mobility which offers a one-stop solution to India's burgeoning fuel import bill and pollution.

"A person does not learn to swim unless he is thrown into the water. Similarly we knew that the industry has the potential to make and adopt EVs. Our job is just to push it otherwise nobody will do so on their own. Everybody loves the status quo," Gadkari said. "I can see that our dream of electric cars, two-wheelers, buses is progressing very fast. There is a lot of talk of timelines but I think it is not required. Electricity as a fuel is so cheap, pollution free, and the cost will also come down as volumes go up, that people will make a beeline for them. At the same time if Bajaj is today exporting 40 per cent of its petrol two-wheelers from India, I can guarantee that with its electric two-wheelers like Chetak, the export will only grow by at least 10-15 per cent."

"We want to make India the number one hub for electric vehicle manufacturing in the world. That is our dream. It is difficult but not impossible to achieve," he added.

Beyond India, Bajaj plans to export the new Chetak to relevant markets of Europe. In FY2019, Bajaj Auto exported over 2 million motorcycles and three-wheelers. Its total turnover was Rs 31,899 crore.