A petrol car is cheaper, easier to maintain, less noisy, refined and is available across all price band of cars. Diesel was initially the choice of heavy vehicles with trucks and buses preferring it due to the high torque that made it suitable for hauling heavy load 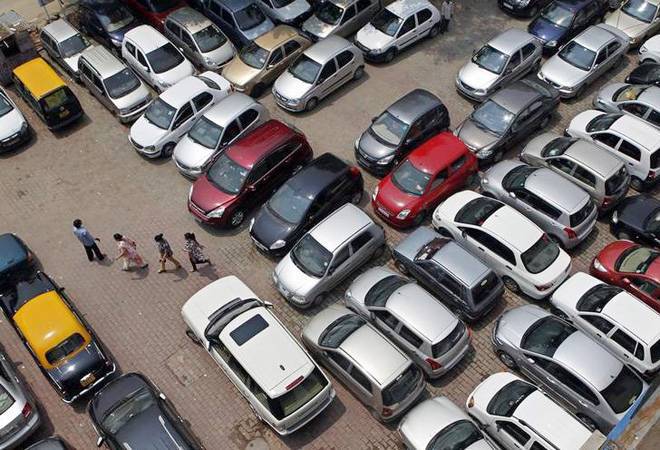 As any potential car buyer can testify, the first question that crops up before one gets down to choosing a car is to figure whether it should run on petrol or diesel. As the country woke up to the once unthinkable reality that diesel as a fuel is now more expensive than petrol, at least in Delhi for now, that first question has taken an altogether new meaning.

A bit of a background first. Petrol and diesel cars have both their own set of strengths and weaknesses. A petrol car is cheaper, easier to maintain, less noisy, refined and is available across all price band of cars. Diesel was initially the choice of heavy vehicles with trucks and buses preferring it due to the high torque that made it suitable for hauling heavy load.

The advent of turbocharging made it possible for diesel to be offered in smaller more compact engines thus facilitating its mass adoption. A diesel vehicle is typically noisy and heavy, less refined and more expensive that also costs more to maintain. Yet, it offers better mileage, great driveability and thanks to low prices compared to petrol, offers terrific bang for your buck.

That last bit, however, has changed dramatically in these last couple of months. A hike of over Rs 7 per litre on VAT by the government of Delhi on May 5, had brought the two fuels closer to parity leading up to Wednesday. In essence, diesel has a higher calorific value which makes it a cleaner burning fuel than petrol. This manifests itself in the higher fuel economy that diesel cars posses over their petrol counterpart and helps negate the differential cost of the two types of vehicles. Thumb rule says, the more you drive, the more you stand to save in a diesel car after the first few years. 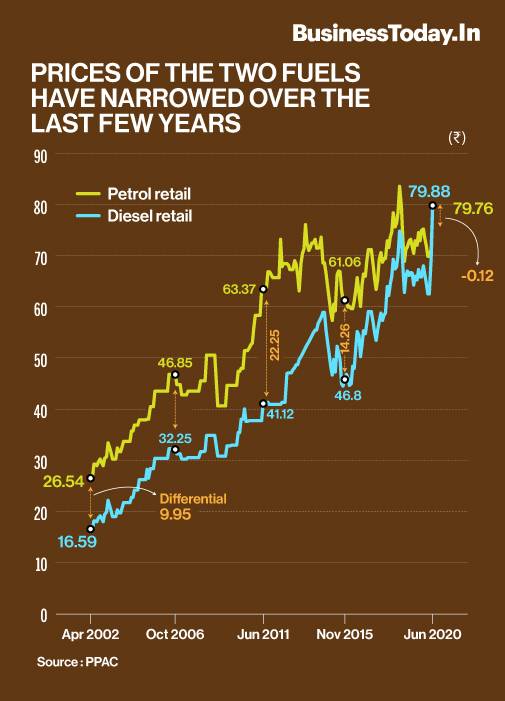 At the peak of the price differential, just over eight years ago in May 2012 when a litre of petrol cost over Rs 30 more than diesel, (see table) the Indian market was in the middle of an unprecedented diesel rush. In 2012-13, diesel cars outsold petrol for the first time ever (see table). Back then if one drove an average 60 kilometres a day, the superior running cost of just 1.91 per kilometre as compared to petrol's 4.36 pkm meant break-even was possible in just over two years. In a five year time-frame, diesel ended up with savings of around Rs 148,000 (see table). 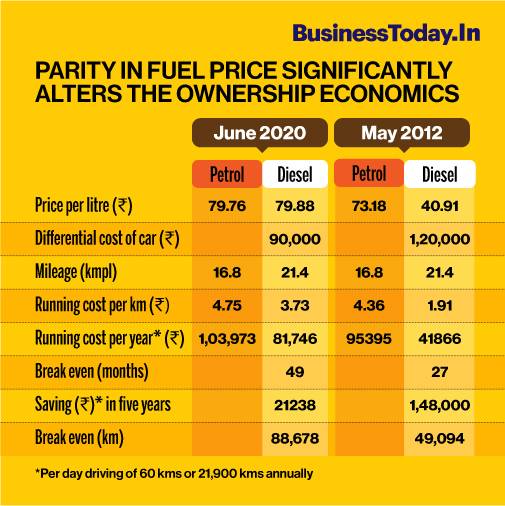 While diesel still holds the same edge over petrol in terms of mileage, the parity in pricing has severely dented its economic practicality. The running cost of a diesel car has now surged to 3.73 pkm which has extended the break-even period to over four years. The saving over five years is down to just Rs 20,000. That would easily get adjusted in the higher maintenance that diesel cars require-the added weight of the engine makes it prone to greater wear and tear, or the higher interest one would pay on a diesel car considering the amount of loan would also be more vis a vis a petrol car.

The advent of BS VI emission norms has made diesel technology more expensive-the exit of market leader Maruti Suzuki is proof of that, though manufacturers have more than absorbed the cost and in fact made it cheaper to keep diesel going. How long will they be able to hold the prices at these levels is not known. Nobody can hazard a guess on what would be the price of the two fuels five years down the line but it is safe to say the days of high differential in prices between the two are at an end. Should you buy a diesel car today, the attractiveness of it in economic terms would probably only worsen with each passing year, if not month. Somebody who bought a diesel car in 2017, for example, hoping to break even by now, would be dismayed today as the timeline has only gotten extended.

An added caveat includes low resale value as 10-year old diesel vehicles are banned in markets like Delhi. Getting a buyer for a six-seven year old diesel car in Delhi is much more difficult than a petrol car that has a validity up to 15 years.

Henceforth, a diesel car would make sense only for the seriously heavy duty user. Somebody who does cross-country rallies, is a transporter, a commuter who does a Noida-Gurgaon trip daily or somebody prone to weekend-long drives ever so often.

For everybody else, that first question now ceases to exist. Instead, which colour would you prefer now?

Kia Sonet to launch in August; compact SUV segment gears for shake up