He said it was "disgraceful" that the company would prevent employees from wearing attire supporting the 'Blue Lives Matter' movement that supports law enforcement, while allowing support for other causes which he described as "Marxist" in nature 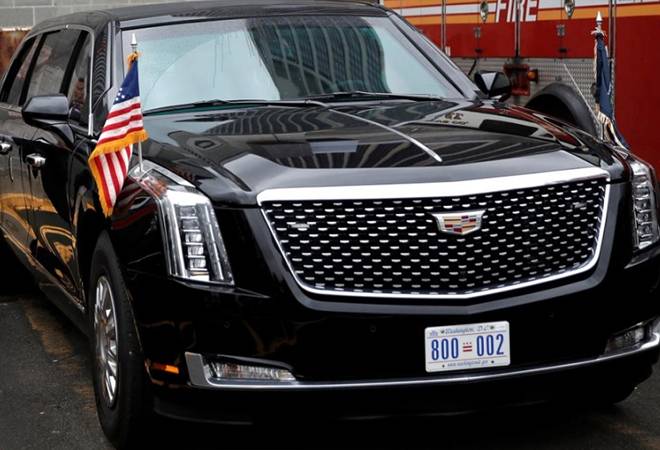 "I'm not happy with Goodyear because what they're doing is playing politics," Trump said at a White House briefing

US President Donald Trump on Wednesday called for a boycott of Goodyear Tire & Rubber Co, accusing the Ohio-based company of "playing politics" by forbidding workers from donning the "Make America Great Again" caps favoured by his supporters. The Republican president, who is seeking a second term in office, told reporters he would swap out the Goodyear tires on his presidential limousine if there were an alternative.

"Don't buy GOODYEAR TIRES - They announced a BAN ON MAGA HATS," he wrote on Twitter, referring to his slogan "Make America Great Again" often emblazoned on baseball caps. "I'm not happy with Goodyear because what they're doing is playing politics," Trump said at a White House briefing. He said it was "disgraceful" that the company would prevent employees from wearing attire supporting the 'Blue Lives Matter' movement that supports law enforcement, while allowing support for other causes which he described as "Marxist" in nature.

His press secretary, Kayleigh McEnany told reporters earlier that support for police officers was just as much an equity issue as the 'Black Lives Matter' movement, citing the targeting of police officers in cities around the country. Trump's tweet followed a news report by WIBW, a CBS affiliate television station in Kansas, about a training session at Goodyear's headquarters that discussed political attire.

Goodyear, which had nearly $15 billion in revenue last year, said a widely circulated image that triggered the controversy was not created or distributed by the company's corporate group. The image spelled out appropriate and inappropriate displays, with 'Black Lives Matter' and 'Lesbian, Gay, Bisexual, Transgender Pride' deemed acceptable, while 'Blue Lives Matter' and 'MAGA Attire' were not.

"To be clear on our longstanding corporate policy, Goodyear has zero tolerance for any form of harassment or discrimination," the company said in a statement. To enforce that policy, Goodyear said, it asks employees to avoid "workplace expressions in support of political campaigning for any candidate or political party as well as similar forms of advocacy that fall outside the scope of racial justice and equality issues."

Shares in Goodyear fell as much as 6% on Wednesday after the president's tweet, but later pared some of the losses to close down trade down 2.4% at $9.50, with volume at four times the 10-day moving average. Goodyear is the largest tire company in North America. Its branded tires were on 24% of new vehicles in the United States in 2018, according to Tire Business, an industry publication.

"It's absolutely despicable that the President would call for a boycott of an American company, based in Akron, that employs thousands of US workers," he wrote in a tweet. Trump, who is trailing Biden in opinion polls, will accept the Republican Party's presidential nomination at the White House next week after a flurry of campaign stops this week.

Trump dismissed the chance of any political or business fallout from his comments. He said he was confident that he was polling "very well" among Goodyear workers, adding, "I think you'll be able to get another good job." The tweet caught at least three senior Trump advisers by surprise. Kellyanne Conway told reporters on Wednesday she had not seen the tweet, but did not view it as a political mistep.

"I think he's done plenty for companies in Ohio and elsewhere, far more than Joe Biden ever did," she said. Boycotts, like tariffs, are a favourite in Trump's political and economic toolkit. In early 2016, before winning the last election, Trump called for a boycott of Apple products until the tech giant agreed to US government demands that it unlock the cellphone of one of the killers in an attack in California.