Kerala plane tragedy: 19 people, including Captain Deepak Sathe, pilot-in-command, and Akhilesh Kumar, his co-pilot, lost their lives in this mishap 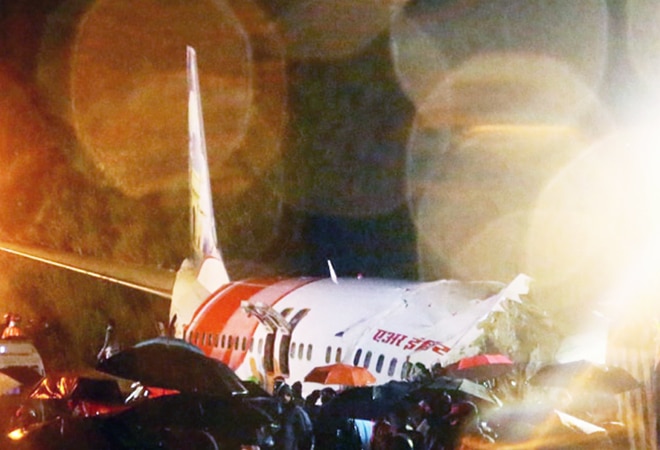 Air India plane crash update: The fuselage broke into two after the aircraft overshot the runway at Karipur airport

The Directorate General of Civil Aviation (DGCA) said that the Air India Express plane was at full speed while making its landing at the Kozhikode International airport in Kerala, also known as Karipur airport, and overshot the runway on Friday evening.

The Dubai-Kozhikode aircraft was at full speed while landing at the Karipur Airport & overshot the runway: Directorate General of Civil Aviation (DGCA) to ANI https://t.co/GpIvVe3BJs

The Boeing 737 aircraft on a flight from Dubai to Kozhikode overshot the tabletop runway at the airport at 7:41 pm on Friday. The fuselage broke into two after the aircraft overshot the runway at Karipur airport. This aircraft has been identified as IX 344. At least 19 people were killed in the mishap as the aircraft skidded off a hilltop runway and split in two while landing in heavy rain conditions at the airport.

19 people, including Captain Deepak Sathe, pilot-in-command, and Akhilesh Kumar, his co-pilot, lost their lives in this mishap. The flight was returning from Dubai as part of the government's Vande Bharat initiative to repatriate stranded Indians from foreign countries.

Civil Aviation Minister Hardeep Singh Puri said that the flight "overshot the runway in rainy conditions and went down 35 feet into a slope before breaking up into two pieces."

Deeply anguished & distressed at the air accident in Kozhikode.

The @FlyWithIX flight number AXB-1344 on its way from Dubai to Kozhikode with 191 persons on board, overshot the runway in rainy conditions & went down 35 ft. into a slope before breaking up into two pieces.

Puri told India Today exclusively that the aircraft could not be stopped. He further went onto state that since the Kozhikode airport is tabletop in nature, it is a challenging airfield that had a 30-feet drop to the ground below. He further said, "Fortunately, the plane that broke into two from fuselage didn't catch fire."