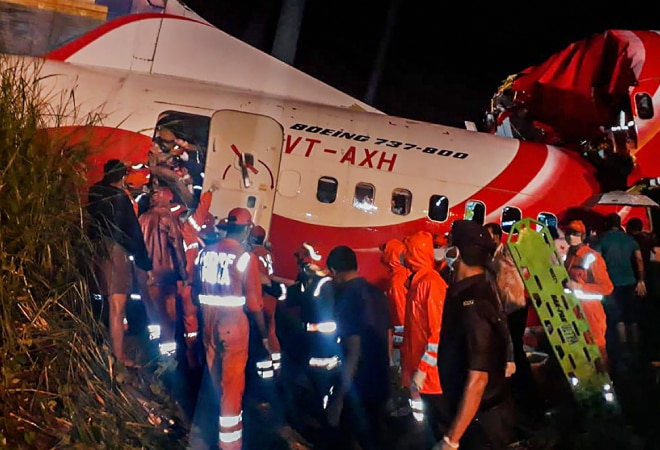 Tragedy has struck Air India Express, the low-cost arm of the national carrier Air India. It was roughly a 3 hours, 54 minutes long flight between Dubai International Airport and Karipur airport in Kozhikode, but as soon as the flight landed at the destination airport, the plane couldn't withstand the rainy weather and overshot the runway. The official statement from Air India Express suggests that there were 190 people on board the plane, including 184 passengers, two pilots and four cabin crew.

While the exact details of what went wrong will take time to appear, the initial reports also remain sketchy. As per flight tracking website Flightradar24, the "examination of the granular data for this flight unfortunately does not yield additional data."

Some reports suggest that as many as 14 people, including former Indian Air Force (IAF) test pilot Captain DV Sathe and his co-pilot, have died after the plane broke into two pieces. Several others have been injured and rushed to nearby hospitals in Calicut. The story will be updated in due course as more information comes out.

People rushed to blame the airport design for the incident, including the fact that it's a table-top airport with reportedly about 200-feet gorge on both sides of the tarmac. But experts say that the size of the runway was adequate to operate a Boeing 737-800 aircraft. "The runway at the Kozhikode airport is about 10,000 feet which is slightly less than Delhi and Mumbai airports, and bigger than Mangalore airport. We should not speculate till the time DGCA determines the actual cause of the accident from FDR [flight data recorder] and CVR [cockpit voice recorder]," says Mark Martin, CEO of Martin Consulting.

Meanwhile, experts say that the apparent cause of the accident seems like poor weather coupled with contaminated runway that could have prompted the pilot to take extremely poor braking action, which may have led the aircraft to skid.

Prior to today's crash, Air India Express operated a fleet of 25 Boeing 737-800 Next Generation (NG) aircraft that supported its low-cost structure. A wholly-owned subsidiary of Air India, Air India Express flies on domestic and international routes, particularly to Southeast Asia and Middle East destinations like Dubai, Abu Dhabi, Sharjah, Singapore and Muscat. Its fleet consists of narrow-body aircraft and its no-frills model is similar to other LCCs (low-cost carriers) like IndiGo, SpiceJet and GoAir.

"Our fleet comprises new and improved Boeing 737-800 Next Generation (NG) aircraft that feature state-of-the-art design and technology to ensure greater comfort, security, and efficiency during your journey," says a statement on Air India Express website.

Started in April 2005, the airline primarily caters to budget travellers, and has an estimated market share of 6 per cent in the domestic market. The share in the international segment is much bigger at 18.6 per cent as on December 2019. In fact, Air India Express is the third-largest international carrier in India after Air India and IndiGo. Air India Express was flying to about 33 destinations before the COVID pandemic. Unlike the parent company, which is deep in losses, Air India Express reported net profit of Rs 169 crore in FY19.

After a gap of over 10 years, this is the second biggest tragedy for the domestic aviation sector. Back in 2010, an Air India Express flight, involving a Boeing 737-800, crash landed at the Mangalore airport.