SpiceJet and GoAir have offered flights on various domestic routes, including the busiest Delhi-Mumbai route, starting May 16, whereas IndiGo and Vistara have opened booking from June 1 onwards Aviation Ministry has not issued orders to resume flights yet

"...all airlines are hereby directed to refrain from booking tickets... Further, the airlines may note that they shall be given sufficient notice and time for restarting of operations. This is for strict compliance by all airlines," DGCA Deputy Director General Sunil Kumar wrote to all domestic and foreign airlines on April 19. 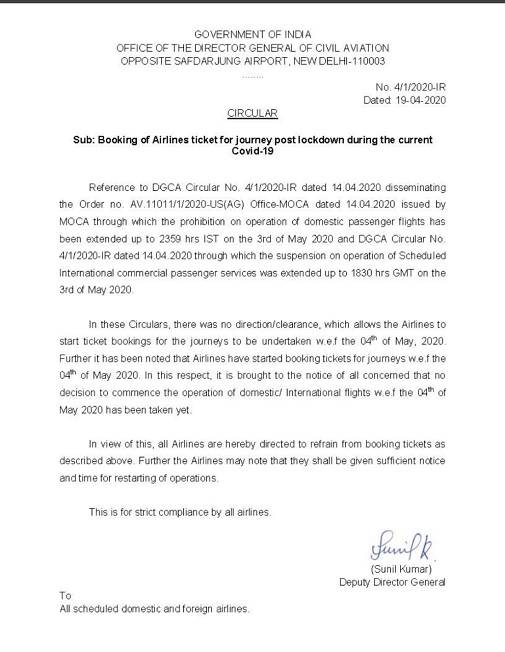 Civil Aviation Minister Hardeep Singh Puri later in a tweet said that "since some airlines did not heed our advisory and opened bookings and started collecting money from flyers, a directive was issued to them on 19th April restraining them from doing so."

As per online travel portal MakeMyTrip, low-cost carriers SpiceJet and GoAir have offered flights on various routes, including the busiest Delhi-Mumbai route, starting May 16. The other two major carriers IndiGo and Vistara have started selling tickets from June 1.

The airlines have also opened bookings for select foreign destinations such as Singapore and Dubai from June.

IndiGo, Vistara and SpiceJet did not respond to e-mail queries on the issue till the time of publishing.

National carrier Air India is, however, waiting for government's directive on selling tickets. Many of its officers are miffed over delay in permission as it puts the state-run carrier at a significant disadvantage over private peers. "Our bookings, both international and domestic, are closed till further notice. We wouldn't like to make any further comment on the issue," Air India said in response to a BusinessToday.In query.

Following public uproar and complaints of airlines not giving refunds for flights cancelled due to Coronavirus-lockdown, aviation regulator Directorate General of Civil Aviation (DGCA) advised the carriers to desist from the practice and also not start forward booking till a decision on resuming air passenger services is taken.

An executive at a private airline said that there was no revenue for the last 35 days but government wanted all bills to be paid. Moreover, the travel demand had plummeted and was unlikely to pick up anytime soon.

Airline executives speaking on condition of anonymity said that it takes time to fill flights and hence they cannot indefinitely wait for government permission on booking tickets. One of the officials said that in case the government decided to extend the lockdown beyond May 3, refunds would be given to passengers as earlier.

India announced a nationwide lockdown from March 25 for 21 days but later extended it to May 3. The airlines had taken bookings for flights from April 15 assuming that the lockdown would be lifted and air transport would be allowed.

But following the government order to continue with the travel restrictions during lockdown, airlines had to refund for cancelled flights.

With relaxations given for various economic activities, there is expectation that lockdown will be lifted from May 3 but a final decision would be taken only after Prime Minister Narendra Modi consults chief ministers in a video-conference scheduled on April 27.

Aviation is among the worst-affected sectors due to coronavirus pandemic and lockdown. SpiceJet and GoAir have cut salaries of employees in absence of cash flow. IndiGo too had announced a cut in salaries but rolled it back.