However, IndiGo's profit for FY19 stood at a mere Rs 156.1 crore, 93 per cent lower than the net profit in FY18. The massive decline was due to high fuel prices and a weak rupee. 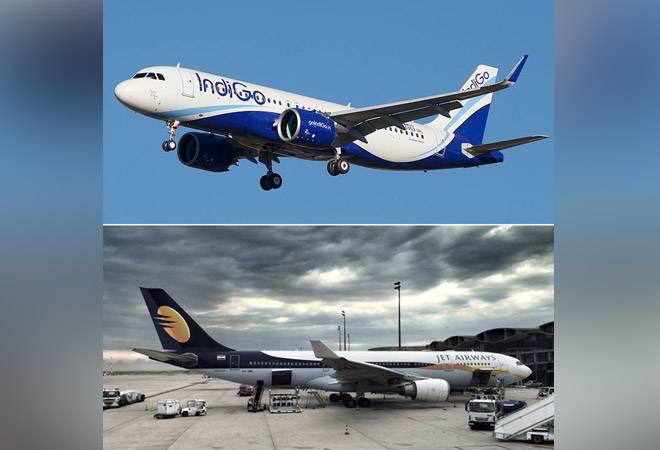 This is nearly a five-fold jump in profits mostly due to stabilising crude prices and IndiGo increasing its market share after Jet Airways grounding.

In a sign that crisis at Jet Airways is benefitting competing airlines, IndiGo on Monday reported a profit of Rs 589.6 crore for the January-March quarter in FY19, compared to Rs 117.6 crore in the corresponding period of FY18.

This is nearly a five-fold jump in profits mostly due to stabilising crude prices and IndiGo increasing its market share. The carrier's total income was up by 35.5 per cent to Rs 8,259.8 crore in the quarter ended March 2019 compared to Rs 6,097.7 crore in the year-ago period, the company said in a statement.

However, the no-frills carrier's profit for the entire financial year stood at a mere Rs 156.1 crore, 93 per cent lower than the net profit in the financial year 2017-18 which stood at Rs 2,242.4 crore. The net profit for the entire fiscal was down due to high fuel prices and a weak rupee. However, the crude oil prices stabilised in the latter part of fiscal.

In a call with journalists and analysts, IndiGo CEO Ronojoy Dutta said that Jet Airways shut down helped in February and March, but the impact will be limited to some international routes by June. A total of 285 former Jet pilots have joined the airline which in turn has helped IndiGo overcome its pilot shortfall.

"Fiscal 2019 was a tough year for the airline industry in India because of high fuel prices, weak rupee and intensely competitive environment," Dutta said.

IndiGo has been having a stellar run of late; the low-cost carrier also increased its passenger market share in April. As of April, IndiGo has a market share of 49.9 per cent in India. Total expenses for the quarter ended March 31, 2019, were Rs 7,643 crore, an increase of 28.9 per cent over the same quarter last year.

IndiGo, as of March 2019, has the largest fleet in India with 217 aircraft. It added nine aircraft to its fleet during the March quarter. IndiGo plans to increase its capacity to 262 aircraft in the coming year. It also reported a relatively decent on-time performance at 76.6 per cent in the four key metros and flight cancellation rate of 1.49 per cent.

Some of the Airbus A320neo aircraft faced technical snags this year, forcing IndiGo to cancel flights. However, the IndiGo management assuaged the concerns by saying that most of the issues have been addressed and issues related to new gears and blades would be cleared by September.

"The airline offered 1,376 peak daily flights during the quarter and connected 52 domestic destinations and 16 international destinations," said IndiGo in the press statement.

So at a time when the entire aviation industry is in doldrums, what is IndiGo doing right? Even though IndiGo has seen management tussle for over a year now, it has managed to not only stay afloat but also stay ahead of its competitors. The now infamous spat between its two promoters, Rahul Bhatia and Rakesh Gangwal over the expansion issues hasn't proved to be a roadblock in its success story. IndiGo has taken full advantage of the space created by the grounding of Jet Airways.

Experts say IndiGo's success is largely due to aggressive pricing on select routes to gain market share. Typically, increasing passenger footfall on new routes requires lower fares to make the airline and routes popular. IndiGo is also known for keeping a low-cost structure. The airline also said that it is connecting smaller cities to make its presence pan India and to capture more of market share.

"IndiGo is a professionally managed airline with the right business model - low cost. As India is a price sensitive market, IndiGo is profitable because of its calibrated growth, operating multiple frequencies on each route, has the commonality of the fleet. Its performance shouldn't be compared with Air India, Vistara or Jet Airways because they are full-service carriers. IndiGo is now reaping the advantage of business volume as it commands almost 50per cent of domestic market share." says Jitendra Bhargava former Executive Director Air India.

For the entire year, IndiGo's expenditure on fuel increased by 19per cent to Rs 27,813 crore.

Dutta added that he is bullish about the future and sees plenty of opportunities for profitable growth in IndiGo's network.

However, some experts expressed concerns that the airline is running after market share and ignoring the long-term ramifications of low airfares.

"Jet Airways grounding has come at the right time for IndiGo to cash in on. With the big network helped especially high load factor at normal price. The passenger confidence in IndiGo is better than what the other LCCs are having. However, take the whole year and not this 9W aided quarter to judge," aviation expert Mohan Ranganathan said.