According to reports, Jet Airways pilots have been asked to take salary cuts of 25-30 per cent, while engineers have been settling at 50 per cent of their current pay 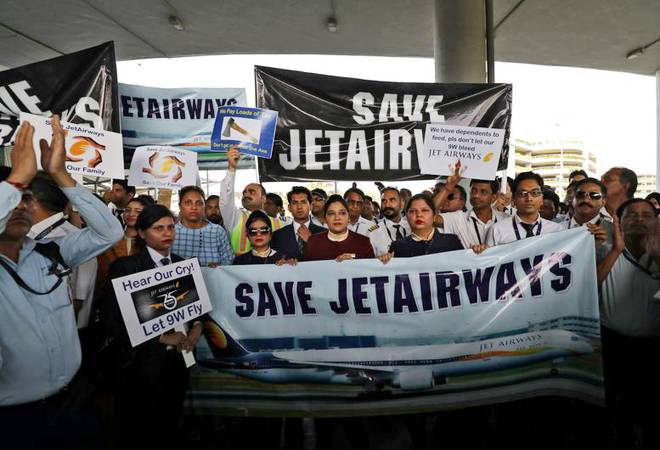 The Jet employees are now facing stress over employments. According to experts, the staff might have to either shift base to Tier-2 or Tier-3 cities or accept job offers having lower compensation.

The future of cash-starved Jet Airways' employees might be staring at an uncertain future but other Indian airlines may now see a value in hiring such experienced staff. The employees of the country's oldest private carrier may end up getting relatively lower pay packages, according to HR experts.

According to reports, Jet Airways pilots have been asked to take salary cuts of 25-30 per cent, while engineers have been settling at 50 per cent of their current pay.

The Jet employees are now facing stress over employments, while some are also hopeful of a turnaround of the carrier. Under such circumstances, the staff might have to either shift base to Tier-2 or Tier-3 cities or accept job offers having lower compensation, say experts.

"In my mind, other airlines will definitely see value in hiring the experienced and highly well-trained staff that Jet has currently," Rituparna Chakraborty, Co-Founder and Executive Vice President of Staffing firm TeamLease Services, told PTI.

According to Chakraborty, the supply of ground staff, crew and pilots are still low in India in comparison to the demand that exists. She also noted that there is a significant demand for core staff while non-specialised staff should look at an alternative industry for suitable functional roles.

"Though morale of Jet Airways employees must be down looking at current scenario but as long as they will be open to exploring job opportunities in Tier-2 and Tier-3 cities, they will be having enough options to explore," said Sunil Goel, Managing Director, GlobalHunt.

Jet Airways has a substantial number of employees who have put in more than two decades at the airline.

According to Nishith Upadhyaya, Head of Advisory Services at SHRM India, the employees of Jet are expected to be absorbed with the intense competition among airlines.

Furthermore, The Air India pilots' union Indian Pilots' Guild (IPG) has urged the management to hire just Boeing 777 (B-777) rated co-pilots on contractual basis instead of hiring costly captains, as it will be a brutal waste of money. Apart from Jet Airways, only Air India Express and SpiceJet operate Boeing fleets in domestic routes.

"Hiring the type rated Captains on B-777 and increase the wage bill dramatically would be an utter waste of resources which we can ill-afford at this time," the IPG wrote in a letter to the Director, Operations of Air India.

At present, the Boeing 777 fleet has approximately 219 captains and 110 first officers. The total numbers are reportedly adequate with the fleet average at 70 hours (per month). An IPG member said, Captains of Jet Airways may be drawing a salary of about Rs 7 lakh per month, reported IANS.

Besides, on Friday, SpiceJet had hired more than 500 employees of Jet Airways, including 100 pilots, and open to inducting more such people. The budget carrier is offering salaries based on their own structure and not the inflated salary paid by Jet, said a SpiceJet executive.