A state-wide break-up on individual drone operators showed that the bulk came from Maharashtra (2,564) and the second and third spot was shared between Karnataka and Kerala Around 16,265 private drone operators have registered so far wherein Ownership Acknowledgement Number (OAN) has been successfully obtained by 15,519 individuals alone. As per a Lok Sabha reply by Minister of State in the Ministry of Civil Aviation Hardeep Singh Puri, only 746 registrations were from corporates. Adding another 204 registrations from government firms takes the total to 16,469 out of the entire 16,518 OAN applications received so far. Besides this, 34 individual OAN has been issued to people applying from outside India.

In order to regulate drone numbers, all drone operators in India had to register their unmanned aerial vehicles on the digital sky platform by January-end. "In order to facilitate the identification of civil drones and drone operators, a one-time opportunity for voluntary disclosure of such drones and drone operators is now being provided," said an aviation ministry order. On successful completion of voluntary disclosure of possessing drone, a Drone Acknowledgement Number (DAN) and Ownership Acknowledgement Number (OAN) will be issued online which will help in validation of drones operations in India. "However, the DAN or OAN do not confer any right to operate drone(s) in India, if it does not fulfil the provisions given in the civil aviation rules," the order added. Any unregistered drone operated beyond January 31 will invite penal action.

A further state-wide break-up on individuals disclosed that the bulk came from Maharashtra (2,564) and the second and third spot was shared between Karnataka and Kerala with a number of 1,595 and 1,472 individuals, respectively. Over 1,000 individuals each came from Gujarat, Tamil Nadu and Uttar Pradesh. 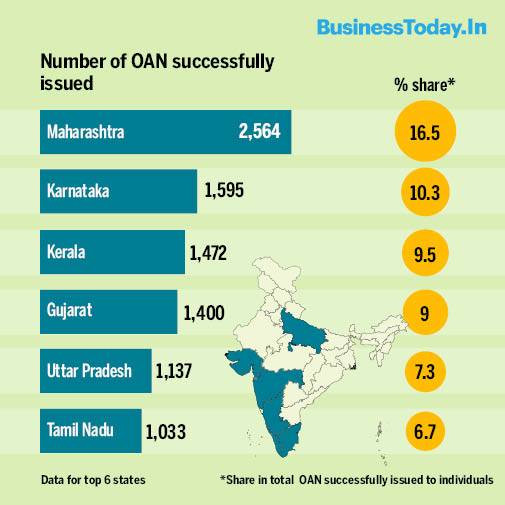 A majority of private corporate drone operators were from Maharashtra with a count of 137 and a total of 115 came from Karnataka. While a bulk of government entities (32) were from Uttarakhand followed by Maharashtra and Rajasthan with a total count of 23 and 18, respectively.