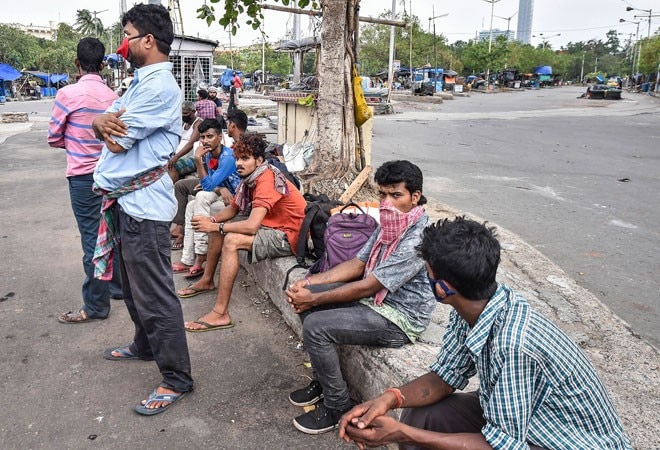 A first of its kind on ground survey of migrants in the Manesar and Bawal industrial areas outside the national capital has revealed 76 per cent of the migrant population received no wages for the month of April while 38 per cent of the rest were not paid in full.

The non-payment of dues is despite repeated government announcements to not deduct wages or lay off workers. For the month of March, the percentage of workers who had not received any salary was much lower at 25 per cent clearly indicating a worsening of situation as the extended lockdown has put finances of companies under duress.

"The government should have expected this. The schemes need to take care of this mass of people who are an important part of the economy," says Sandeep Sachdeva, co founder and CEO, Safe In India, one of the NGOs that conducted the survey. "They should have created a way of direct cash transfer for the workers because that was the need of the hour. Even the state governments that announced it, implemented it in a way that it would fail. Haryana for example said it would give Rs 1,000 per week but it was restricted only for local people and not migrants."

The plight of the migrants has captured everybody's imagination as millions of workers have hit the roads or thronged trucks, buses, and in recent times trains, to get back to their native places. Yet the survey says only 23 per cent of the workers at least in these two regions chose to leave while the majority have stayed back hoping to rejoin the same companies where they were working.

In India, three out of four workers on a factory shop-floor is a contract worker which makes them ineligible to be part of any formal union. Not surprisingly then, 95 per cent of the workers in the survey were ununionised. Even the remaining 5 per cent said the union never offered any help and they saw no benefit of being part of it.

It is an important aspect, as 82 per cent of the workers did not even reach out to their employers after receiving no or partial payment for March and April indicating a lack of confidence and ignorance about their rights. About 30 per cent of them reconciled themselves by saying they could not have done anything about it and that with no work in April the employers would not have paid anyway.

Conducted by Safe In India along with Agrasar, a Gurgaon-based NGO, the survey covered 100 workers in the two industrial belts that houses a host of automobile companies like Maruti Suzuki, Hero MotoCorp, Honda Motorcycle and Scooters India, Harley Davidson and JCB, along with scores of ancillary units and smaller factories that supply parts to them.

The only silver lining is the partial lift off of the lockdown and the ensuing resumption of some economic activity that has meant a few workers have started receiving calls for work from contractors who serve as middlemen between workers and factories. A vast majority of 86 per cent of those that have stayed back said they would rejoin their old jobs even when they were not paid for the last two months.

"That tells you about their helplessness. They are ready to go back to work in the same factory that has betrayed them even when they know they maybe betrayed again if there is another lockdown which is likely," Sachdeva says. "The refrain is obvious what options do they have?"

Yet, the number of migrants is only rising. A separate analysis done by IIM Ahmedabad professor Chinmay Tumbe says nearly a sixth of all households in India has a migrant in their midst. The scale of the reverse migration this time has created doubts whether there will be a shortage of workers for companies that are attempting to restart factories.

Sachdeva however allays such fears and instead says there would be higher unemployment as the ramp up of production in factories would be staggered. The requirement of workers on every shift would fall due to social distancing norms that have become mandatory. In a scenario where only 40-50 per cent of production would be possible, requirement for workers on contract would be much lower.

"The entire economy has come to a standstill. There is a demand-side problem where consumers are reluctant to spend. It runs parallel to a supply-side problem where factories cannot produce as much as they can. The number of workers required would actually be much lower than the supply," he said. "It is not a happy situation as it may also affect wages that may fall."

Could that mean even more migrant workers leaving big cities and making their way to their native small towns and villages? Sachdeva believes another 12-14 per cent of those that have stayed back may go back to their villages but that could be offset in due course with even more coming back in search of livelihood.

"The harsh reality is, rural India cannot support its population so migration will happen. The experience this time for many has been harsh and it will cause a burn out in a lot of them who are in their late 30s and early 40s. They may never come back and decide to do whatever they could in their native places," he says. "But the process of migration itself will not stop. More will come and they will be younger and unskilled. So we will have a glut like situation here and a significant portion will be unskilled workers."