Growth in the Indian pharma market is expected to be linear ahead. The market has now grown for the fifth consecutive month and the momentum is likely to improve The Indian pharmaceutical market's (IPM) maintained its growth trajectory for the fifth consecutive month by expanding 4.5 per cent in January. After growing 8.5 per cent in December, it grew 4.5 per cent last month, signalling that the post-Covid recovery is in full swing, pointed an Anand Rathi report. 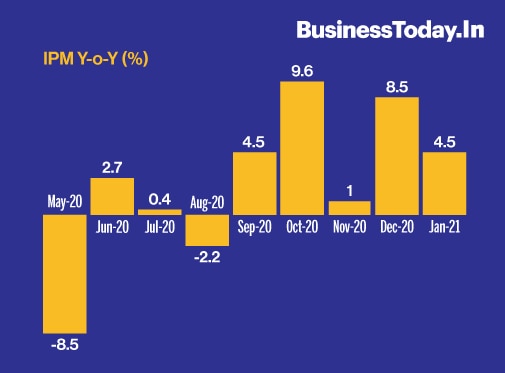 Meanwhile, chronic therapies continue to lead growth: cardio was up 8.8 per cent to Rs 1,770 crore in January. Other chronic therapies like vitamins grew 12.2 per cent, and diabetes 5.3 per cent. After a robust performance in December, acute therapies growth consolidated in January. Anti-infectives declined 2.7 per cent to Rs 15.4 billion, gastro grew 14.3 per cent, pain 5 per cent. Respiratories (cough and cold), ophthal and anti-malaria were other therapies whose sales declined during the month.

According to the report, growth in the Indian pharma market is expected to be linear ahead. The market has now grown for the fifth consecutive month and the momentum is likely to improve. Growth in January was hit by a less-than-expected uptick in anti-infectives. "We expect acute therapy sales to improve as patient footfalls at hospitals/clinics are rising. Besides, price hikes (5 per cent in Jan) and launches will add to growth. In the present context, we expect performances of MNCs such as Abbott and Pfizer to improve. Indian chronic-therapy-centric companies such as Torrent, Sun, Lupin and Ajanta are expected to outpace the market in the near term," it said.