Among the winners was, India's richest woman, Nita Ambani, the Chairman of Reliance Foundation and Director of Reliance Industries. It was a power packed affair at Business Today's Most Powerful Women in Indian Business awards conferred on September 10 at ITC Grand Central,  Mumbai. The awards were given by Chief Guest, the CEO of global generic pharma giant Mylan, Heather Bresch and Raj Chengappa, Group Editorial Director (Publishing) of the India Today Group. 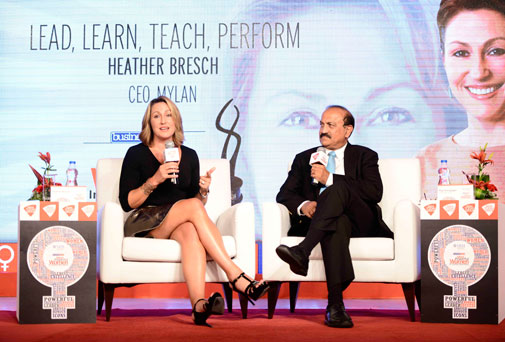 There was Neelam Dhawan, Managing Director of HP India, who has turned the company into a market leader again after it had slipped a couple of years ago. There was the effervescent Rahul Bajaj, Chairman of Bajaj Auto, who also chaired the jury meeting that decided on the winners. Along with Bajaj, jury member Sam Balsara also graced the occasion. And there was India's power woman in stock markets, Chitra Ramkrishna, Managing Director of National Stock Exchange. Among the winners was, India's richest woman, Nita Ambani, the Chairman of Reliance Foundation and Director of Reliance Industries.

The awards event began with BT's Editor Prosenjit Datta welcoming the members of the audience and explaining the significance and methodology of the awards. The award ceremony was preceded by intellectual sparring, as top women business leaders - and some men as well - debated over the subjects of the two panels. The first panel began with the topic: "Glass ceiling: Are there some industries that are still women unfriendly?" The panelists were a mix of people from different backgrounds and brought in differing perspectives. There was veteran corporate lawyer Pallavi Shroff, Managing Partner of Shardul Amarchand Mangaldas; the young and enterprising Radhika Piramal, Managing Director of VIP Industries; leading film producer and distributor Jyoti Deshpande, Group CEO and Managing Director of Eros International; GE's Chief Commercial Officer for South Asia, Ipsita Dasgupta. And there was Santrupt Misra, one of India's top HR practitioners, who is now Group HR Head of the Aditya Birla Group, and CEO of its Carbon Black. 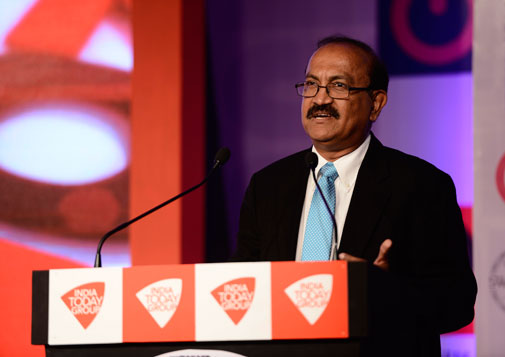 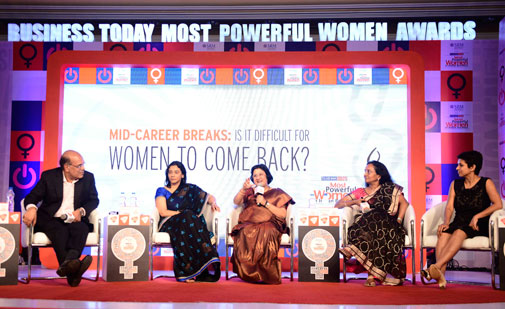 The second panel had more heavyweights, led by India's top banker, Arundhati Bhattacharya, Chairman of State Bank of India. With her was Aruna Jayanthi, CEO of Capgemini India; the face of Facebook in India, Managing Director Kirthiga Reddy; and the charming Renuka Ramnath, Founder, MD and CEO of Multiples Alternate Asset Management. And the discussion was moderated by another HR veteran, Sudhanshu Tripathi, Group President-HR of the Hinduja Group. This group debated on the topic: "Mid-career breaks: Is it difficult for women to come back?"