OnePlus has got a tough job at hand. What used to be its USP once - flagship at less - isn't true anymore. Plus, there’s plenty of competition from its Chinese, American as well as South-Korean counterparts too. But the company has once again struck gold with its top-of-the-line model.

OnePlus has got a tough job at hand. What used to be its USP once - flagship at less - isn't true anymore. Plus, there’s plenty of competition from its Chinese, American as well as South-Korean counterparts too. But the company has once again struck gold with its top-of-the-line model.

Green is the new black. And the one in the 10 Pro with slight texture (reminiscing of the company’s Sandstone finish) looks classy. While the rear doesn’t feel like glass, it is glass, so one has to be careful while handling the device. More so because the rear does not get the Gorilla Glass Victus as on the front but is protected by the Glass 5. The raised bump housing multiple cameras complement the design. Just hide the One+ and Hasslebland branding and one can easily confuse it to be a premium Samsung device. The metal bands on the sides house the regulars - notification slider and power key on the right panel, volume controls on left, and Dual Sim tray along with charging port and speaker grills at the bottom. And with the 6.7-inch screen (same size as the iPhone 13 Pro Max), it’s compact and comfortable to grip. 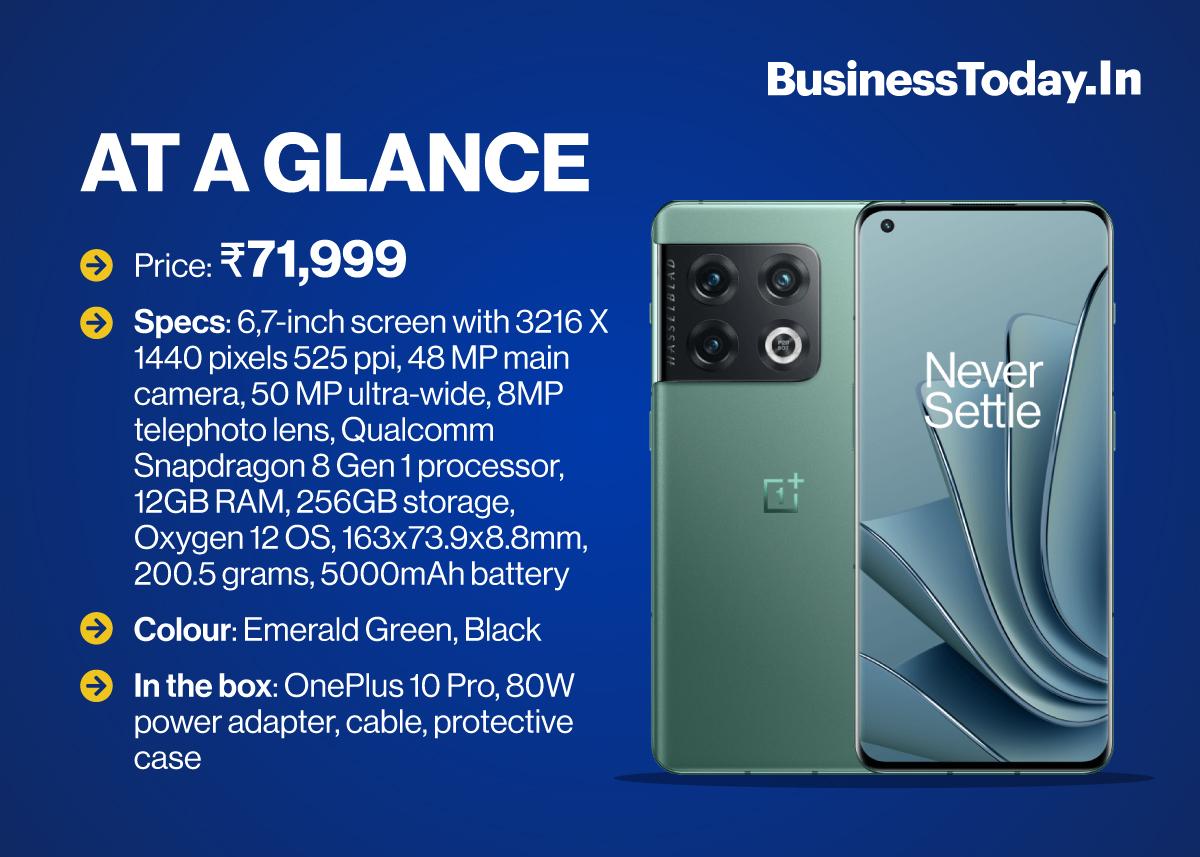 With the display technology, Samsung wins hands down. But the 10 Pro does not disappoint either. The 6.7-inch 1440p screen curves towards the side panels, offering an immersive view. While the screen appears sharp and vibrant, it also supports a 120Hz refresh rate (great for gaming), which can be brought down to 60Hz for saving battery. And with the LTPO2 display, it can be as down as 1Hz saving more battery. Streaming content on the bright display was great and so was reading long-format articles. I preferred using dark mode on one of the two phones I use and with the OnePlus 10 Pro there are three dark mode settings to choose from.

Complementing the design was the rear camera setup that houses three lenses - a 48 MP main camera with f/1.8 with OIS, 50 MP ultra-wide camera and an 8MP telephoto lens. There is a fourth cutout on the camera bump but that is for flash. Using pixel binning, the primary camera by default captures images at 12 MP resolution and the images captured papered sharp and vibrant. The AI mode identified the subject but often the results appear over-saturated and looked artificial at times. So glad there was a quick toggle to turn it off. However, the HDR worked well. Over the previous-gen Pro model, this year’s flagship has camera improvements but it still falls short on sharpness and colour in comparison to Samsung’s flagships. By default, the ultra-wide camera view is 110 degrees but can be switched to 150-degree from the settings for capturing images but not videos. The same lens can capture macros too but nothing fancy. There is also a fisheye mode where the images turned out a little distorted. The low-light imaging was decent with the night mode kicking in. And there are some value adds too. the Hasselblad manual mode is available for all three sensors.

The OnePlus 10 Pro is powered by Qualcomm Snapdragon 8 Gen 1 system-on-chip, paired with up to 12GB RAM and 256GB internal storage which handles all sorts of workloads with ease. There wasn’t any heating issue while gaming but I could feel it getting warm after about 20 minutes. And for better performance, there is a RAM boost feature that analyses the usage to predict the apps to launch and data to load. There is also RAM expansion feature where a part of storage can be used to expand RAM (options onboard include 3GB/5GB or 7GB) which comes into effect after restarting the device. One thing I was rather disappointed by was the UI. The Oxygen OS was very close to stock Android but the one on the OnePlus 10 Pro seems heavily influenced by ColorOS12. The device is backed by impressive charging time - as is it juiced up from zero to 100 per cent in flat 30 minutes. And does the charge last a day? Easily.

Taking on Samsung’s Galaxy S-series head-on, the OnePlus 10 Pro has left no stone unturned. The elite design, stunning camera setup and supercharged performance make it a great buy. While my review unit was the one with 12GB RAM and 256GB onboard storage, there is a 8GB with 128GB storage variant available for Rs 66,999.