Made of 100 per cent recycled aluminium, the Apple Watch SE is available in 44mm or 40mm case sizes, and three case finishes - silver, gold or space grey. It will be compatible with all Apple Watch bands including the new Solo Loop and Braided Solo Loop 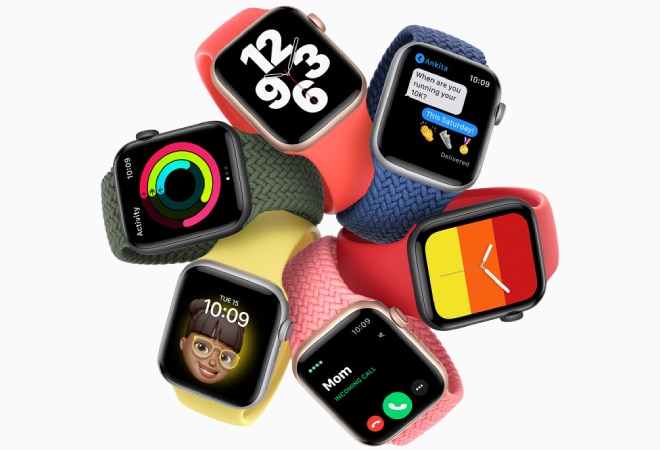 Making its smartwatch accessible to a bigger set of audience, Cupertino tech giant Apple has launched the Apple Watch SE. Claiming it to be a combination of design, function and value, prices for the Watch SE will start at Rs 29,900 (including taxes) for the GPS variant and Rs 33,900 onwards for the GPS+Cellular version. However, the Apple Watch SE is priced starting $279 (before local taxes) in the US market.

"Apple Watch SE combines elements of the Series 6 design with the most essential features of Apple Watch, all at a more affordable price," said Jeff Williams, Apple's Chief Operating Officer. "We're excited to offer another great option to help customers stay connected, be more active, and keep an eye on their health."

Made of 100 per cent recycled aluminium, the Apple Watch SE is available in 44mm or 40mm case sizes, and three case finishes - silver, gold or space grey. It will be compatible with all Apple Watch bands including the new Solo Loop and Braided Solo Loop.

The Apple Watch SE too will sport a Retina display for a crisp and sharp screen on the wrist. The interface will allow for large and easy-to-read app icons and fonts. A variety of new watch faces are optimised for the display, for easy viewing notifications, text messages, workout metrics, and more.

Other features include accelerometer, gyroscope, and always-on altimeter, same as on Apple Watch Series 6. It will also have the latest motion sensors and microphone on board that will offer health and safety capabilities including fall detection, Emergency SOS, international emergency calling, and the Noise app.

It is powered by S5 System in Package (SiP) and a dual-core processor, which Apple claims offers up to two times faster than Apple Watch Series 3. The Digital Crown with haptic feedback generates incremental clicks with a mechanical feel as it is rotated. Using the latest speaker and microphone, the watch can be used for phone calls, Siri, and Walkie-Talkie. Running watchOS 7, the Apple Watch SE will support Family Setup, which allows kids or older family members without an iPhone to use Apple Watch, along with sleep tracking, automatic handwashing detection, and new workouts. With watchOS 7, users will be able to personalise to the next level with seven new watch face options, including Stripes, Chronograph Pro, GMT, and Artist, while curating, discovering, and sharing new watch face configurations with others. New health and fitness features, including low-range VO2 Max, sleep tracking, automatic handwashing detection, and new workout types, can help users better understand overall well-being.

This year, Apple has decided to remove the AC adapter that could become electronic waste from Apple Watch SE packaging, and helping its Apple Watch manufacturing partners transition to renewable energy.

As the new watch will be available in the US starting coming Friday, the India availability date has not yet been announced by Apple.