Having the same design footprint as of the previous-gen Watch, the new Apple Watch Series 6 features a redesigned hardware for more features and power 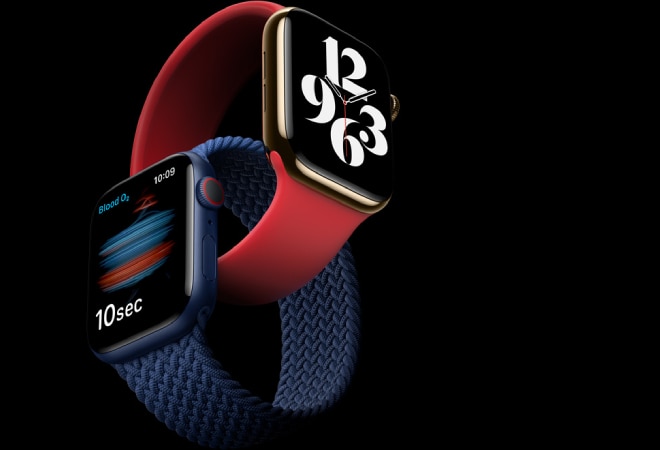 Focusing on health capabilities even further, Apple has unveiled the Apple Watch Series 6 with Blood Oxygen Sensor and App. This new feature will be able to measure the oxygen saturation of the user's blood within 15 seconds. Oxygen saturation, or SpO2, represents the percentage of oxygen being carried by red blood cells from the lungs to the rest of the body and indicates how well this oxygenated blood is being delivered throughout the body. Apple says this new feature will help the user understand their overall fitness and wellness.

To measure the Oxygen Saturation, the Blood Oxygen sensor employs four clusters of green, red, and infrared LEDs, along with the four photodiodes on the back crystal of Apple Watch, to measure light reflected back from blood. Apple Watch then uses an advanced custom algorithm built into the Blood Oxygen app, which is designed to measure blood oxygen between 70 per cent and 100 per cent. It compensates for natural variations in the skin and improves accuracy. A user can check the measurements at any time, whereas periodic background measurements will occur when they are inactive, including during sleep. All the data will be visible in the Health app, and the user will be able to track trends over time to see how their blood oxygen level changes.

It houses a new dual-core processor based on A13 Bionic in iPhone 11, the upgraded S6 System in Package (SiP) runs up to 20 per cent faster, allowing apps to also launch 20 per cent faster, without compromising on battery backup. Apple claims with all these features, the battery backup continues to be close to 18 hours. Additionally, Apple Watch Series 6 also houses the U1 chip and Ultra-Wideband antennas, which will enable short-range wireless location to support new experiences, such as next-generation digital car keys. Most importantly, the Apple Watch Series 6 offers faster charging, completing a full charge in under 1.5 hours. The enhanced Always-On Retina display is up to 2.5 times brighter than Apple Watch Series 5 outdoors when the user's wrist is down, making it much easier to see a watch face in bright sunlight. When the wrist is down, the user will be able to access Notification Center and Control Center, tap on complications, and swipe to change faces without having to wake their watch screen.

The always-on altimeter will provide real-time elevation all day long by using a power-efficient barometric altimeter, along with GPS and nearby Wi-Fi networks. This feature allows for the detection of small elevation changes above ground level, up and down to the measurement of 1 foot, and can be shown as a new watch face complication or workout metric.

The new Apple Watch Series 6 will be available in a new blue colour along with silver, space grey, and gold aluminium case options. There will also be a (PRODUCT)RED Apple Watch with exclusive matching bright red bands.

Running watchOS 7, new health and fitness features such as low-range VO2 Max, sleep tracking, automatic handwashing detection, and new workout types will be accessible on the Watch Series 6. Family Setup in watchOS 7 extends Apple Watch to the entire family by allowing kids and older family members of the household who do not have an iPhone to benefit from the connectivity, safety, and fitness features of Apple Watch.

Apple bundles services under Apple One, prices start at Rs 195 per month