The Surface 4 will come with a fingerprint sensor on the keyboard and Cortana integration inside the new tablet. 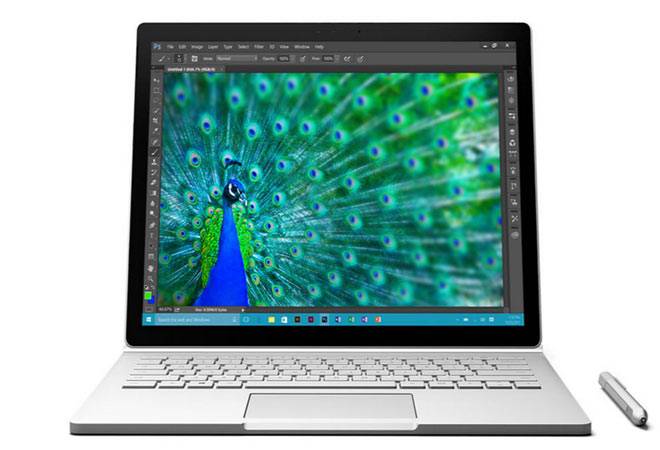 The Surface Book, which will compete with Apple's Macbook and Google's Chromebook, will run NVidia's GPU with 12 hours of battery life. (Photo: Microsoft.com)

Technology giant Microsoft on Tuesday launched a tablet and a convertible laptop PC - the Surface 4 Pro and Surface Book - priced at $899 and $1,499 respectively.

Microsoft Surface division's vice president Panos Panay took to the stage to introduce the new devices. "This challenge of the tablet and the laptop... which do you buy? Remember that problem? It's gone," he said.

The Surface 4 will come with a fingerprint sensor on the keyboard and Cortana integration inside the new tablet, which fits a 12.3-inch display in the same physical footprint as the older 12-inch device.

Panos, who also introduced a new Pen, said: "And yes, there's an all-new Surface Pen as well, which also has an eraser on the end of it. The new pen has 1,024 levels of pressure sensitivity and attaches magnetically to the side of the Surface Pro 4 when not in use."

"It comes in a variety of colors and even has Cortana integration: you can activate Microsoft's voice assistant by holding the button on the stylus," he added.

The company also launched the new Surface Book laptop with 13.5-inch display which can be seen as competition to the new Apple tablet.

It has the latest Intel Core i5 and i7 processors, from the Skylake family. There's also an Nvidia GeForce GPU with GDDR5 memory but that is located in the base and will need the display kept docked to tap into its power. The dock also includes two USB 3.0 ports and an SD card slot.

The company claims that the Surface Book is twice as fast as the MacBook Pro. "It will be available for pre-order from October 7," it said.