Moto by Lenovo has announced the launch its new flagship smartphone in India, the Moto X Force. The highlight of the Moto X Force is its 'ShatterShield' display, which can withstand drops and is non-breakable. 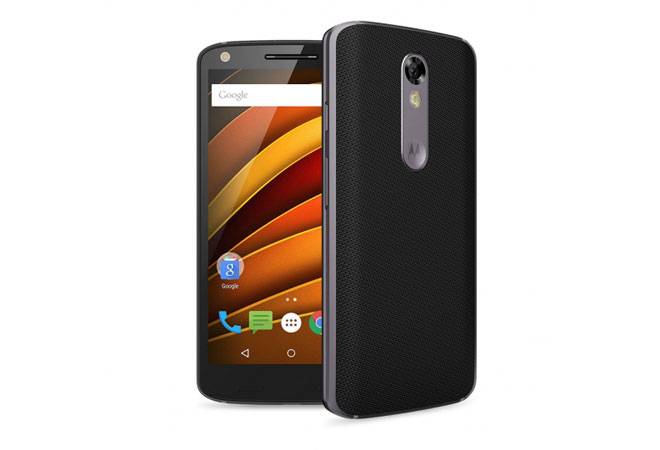 Moto by Lenovo has announced the launch its new flagship smartphone in India, the Moto X Force. The highlight of the Moto X Force is its 'ShatterShield' display, which can withstand drops and is non-breakable. The company claims that the phone's display comes with four-year replacement warranty in case of accidental damage. The 'ShatterShield' display is made of an aluminium rigid core, flexible AMOLED screen,  dual-layer touchscreen panels and, in addition, has water-repellent nano-coating.

The Moto X Force features a 5.4-inch WQHD display with 540 ppi. It is powered by Qualcomm Snapdragon 810 chipset and is paired with 3 GB of RAM. Running on Android Lollipop operating system, the phone will be available in two storage capacities - 32 GB and 64 GB. It boasts a 21-MP rear camera, a 5-MP front facing camera and 3,760-mAh battery onboard. Priced at Rs 49,999 for the 32-GB variant and Rs 53,999 for the 64-GB variant, the device will be available in black, grey and white colour options.

With the Moto X Force the company is venturing into offline retail as well. Amit Boni, General Manager, Motorola India, says, "Moto in 2016 will come across both platforms, offline and online. With Moto X Force, we are opening up to offline retail as well." Boni further added that "What made Motorola successful is the software such as moto voice, moto display and moto action; and hardware with features such as turbopower and Shattershield."

Lenovo acquired Motorola a couple of years ago and since then both the companies have been operating independently. But recently, Lenovo announced a dual-brand smartphone strategy under the names Moto and Vibe. While Moto will be an aspirational brand, Vibe will be a mass-market challenger brand.

Recently, Canalys reported that Lenovo and Motorola's combined shipments for the quarter were just short of 3 million units, up almost 60 per cent year-on-year, moving them past Intex to take third place in the Indian market.

Says Sudhin Mathur, Director - Smartphones, Lenovo MBG, "The combined sales of Moto and Lenovo smartphones rose to 8 million plus devices in calendar year 2015, witnessing 1.6 times growth from 4.9 million from 2014. Currently, we are manufacturing three Moto and two Vibe smartphones at the Sriperambudur, Chennai factory and will ramp up the production further. More than half the phones sold in India will be manufactured in India in the year 2016."

The Moto X Force will be available starting February 8 in online and offline retail channels. It will be available on Flipkart and Amazon in the online space and will debut across leading retail stores in general trade and large format chains such as Chroma, Spice Hotspot.

Now, one billion people use WhatsApp