With 5 new launches, Nokia's MWC2018 carnival has a phone for everyone

With five new launches, three of which are Android One devices, one Android Oreo Go edition, and a 4G version of its 8110 label, it's a merry-go-round for smartphone users. With five new launches, three of which are Android One devices, one Android Oreo Go edition, and a 4G version of its 8110 label, it's a merry-go-round for smartphone users. Of the three Android One devices, the new Nokia 6 and Nokia 7 Plus are carved out of a single block of aluminium whereas the more premium Nokia 8 Sirocco is shaped out of a single block of 2.5mm steel which has twice the structural integrity of a phone made out of aluminium. Nokia 1 is the first Android Go (Oreo) Edition smartphone.

Nokia 8 Sirocco features a 5.5-inch OLED display, Qualcomm Snapdragon 835 SoC, Android 8.0 Oreo, 128GB inbuilt storage and 6GB of RAM, all of which is packed inside a 7.5mm thick curved body with a stainless steel frame and chassis with a 2mm chamfered edge. In terms of optics, the device carries a dual rear camera setup with one 12-megapixel Zeiss lens and 13-megapixel telephoto for 2x optical zoom, along with 5-megapixel front-facing wide-angle camera touted with 84 degree FOV and support for the Pro Camera mode. The 3,260 mAh battery supports Qi wireless charging and fast charging promises up to 50% power up in 30 minutes. Priced at 799 euros, Nokia 8 Sirocco will start shipping in early April 2018 and should hit Indian shores at closer to Rs 65,000 mark.

Running Android 8.0 Oreo, Nokia 7 Plus is powered by an octa-core Qualcomm Snapdragon 660 SoC complete with 4GB of LPDDR4 RAM, and bears a 6-inch full-HD+ (1080x2160 pixels) IPS display with an 18:9 aspect ratio, 500-nits peak brightness rating, and Corning Gorilla Glass. The Nokia 7 Plus' dual rear camera setup comprises a 12-megapixel wide-angle primary camera with an f/1.75 aperture, and a 13-megapixel camera with an f/2.6 aperture and 2x optical zoom. At the front is a 16-megapixel fixed focus offering with an f/2.0 aperture, 1-micron pixels, and Zeiss optics. Available in two colour choices, Nokia 7 Plus will start shipping early April for 399 euros, before taxes and subsidies. The new Nokia 6 that marks the company's debut in Android One platform, runs on Snapdragon 630 with either 3 or 4GB of RAM, with 32 or 64GB of storage. The device has a 16-megapixel camera with Zeiss optics and dual-tone flash at the rear with a fingerprint sensor just underneath it, while at the front is a 8-megapixel wide-angle sensor with the 5.5-inch HD IPS display covered by 2.5D Gorilla Glass underneath. The 3,000mAh battery features USB-C fast charging. Available in choice of three colours, the new Nokia 6 will start shipping in early April for 279 euros before local taxes and subsidies. 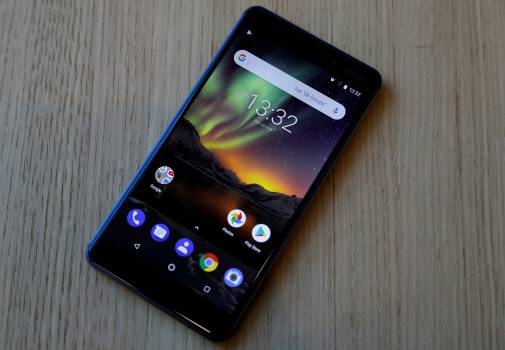 The Nokia 1 that features a 854x480 4.5-inch display and a quad-core MediaTek processor operating at 1.1GHz with 1GB of RAM and 8GB of storage underneath, has a 5-megapixel rear camera, and a 2-megapixel front camera. Available in early April for $85, the Nokia 1 can be customized with Nokia Xpress covers that come in 4 colour options. The Nokia 8110 4G will be available from May for a global average retail price of 79 euros.