Man orders apples from grocery shop, gets iPhone SE and it was not a mistake

A man in the UK recently posted an image of him getting an iPhone SE in a supermarket order in which he originally ordered Apples. Interestingly enough, he is not alone to have faced such a mix-up. 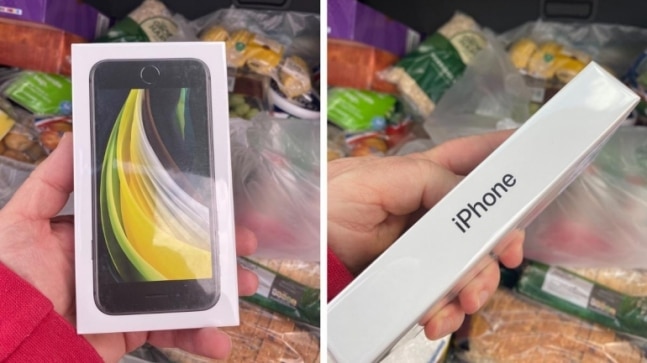 Shoppers, especially those buying their goods from e-commerce stores, have often complained of getting the wrong orders delivered to them. Many times, these orders misplace an item of high value like a smartphone with some totally unrelated item in its place, leaving the customers rather disappointed. A man in the UK recently experienced such a mix-up. This one case, though, had quite a happy ending.

Nick James, a 50-year-old man from Twickenham in the UK, had recently placed a click and collect order at Tesco, a global chain of supermarkets. In the order, James had selected Apples as part of the grocery. As James went to collect his order, he was surprised to find that it wasn't actually Apples that the supermarket placed in his order, it was an Apple iPhone SE.

At first, James was as surprised and confused as we are upon knowing of this. He double-checked his credit card bill for the amount deducted from it. Convinced that he had actually paid for Apples which he could eat, the presence of an iPhone SE instead seemed like a huge mix-up.

It was meant to appear so, but be assured that it was no mistake by which James got his iPhone SE. The brilliant ruse was, in fact, a marketing gimmick by Tesco wherein the supermarket chain is handing out such gifts to unsuspecting buyers. The exchange is being termed as Super Substitute and is leaving smiles on customers' faces since it has started.

Taking to Twitter, James thanked Tesco for the device. He wrote, "A big thanks this week to @Tesco & @tescomobile. On Wednesday evening, we went to pick up our click and collect order and had a little surprise in there - an Apple iPhone SE. Apparently, we ordered apples and randomly got an Apple iPhone! Made my sons week!"

This is not the first such incident wherein Tesco has handed out goodies. Another user named Kirsty Marie recently shared her experience of shopping at a Tesco store. Much like James, Marie received a pair of Airpods in her order as a "supersub" by Tesco.

In a note accompanying the surprise, Tesco writes that the Super Substitute brings in a chance to win a smartphone or accessories to customers placing a click and collect the order on the store. The surprises can range from an iPhone SE in place of Apples, a Samsung Galaxy Tab A7 in place of laundry tablets and even a Nokia phone in place of gnocchi.

But what if you really needed those Apples you ordered?

Don't worry. You get those too.

Also read: | Thief snatched phone in Noida, returned it because it was Galaxy S10 Plus and not OnePlus 9 Pro
Also read: | Google Assistant can now help you find your iPhone, even if silent or on DND
Also read: | Apple Spring Loaded 2021: New iPad Pro, AirTags and everything else expected on April 20 event