Chandrayaan 2, which is currently orbiting around the moon, has captured images of Jackson, Mach, Korolev and Mitra craters #ISRO
Lunar surface imaged by Terrain Mapping Camera-2(TMC-2) of #Chandrayaan2 on August 23 at an altitude of about 4375 km showing craters such as Jackson, Mach, Korolev and Mitra (In the name of Prof. Sisir Kumar Mitra)

Jackson is an impact crater located in the northern hemisphere on the far side of the Moon.  It is 71 km in  diameter.

It has 92 km diameter. Mach crater is named after Professor Sisir Kumar Mitra, who was an Indian physicist and Padma Bhushan recipient known for his pioneering work in the field of ionosphere and Radiophysics.

The Korolev crater is 437 km in diameter and has several small craters of varying sizes.

The space agency said these pictures of the lunar surface were taken on August 23 by the Terrain Mapping Camera-2 of Chandrayaan-2 from an altitude of about 4,375 km. 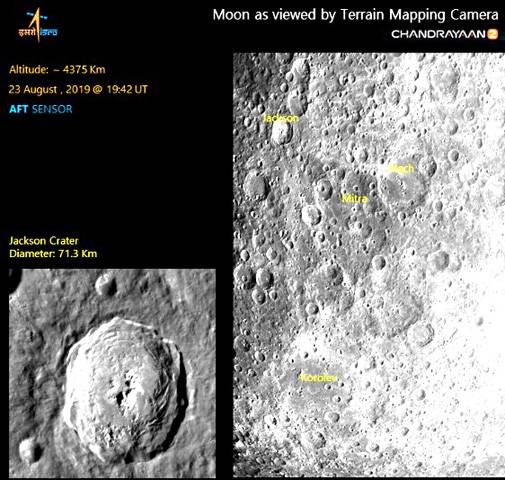 In another image, Chandrayaan 2 has captured images of Kirkwood and Sommerfeld craters. Sommerfeld is a large impact crater located in the farside northern latitudes of the Moon of 169km diameter. Kirkwood crater, which is named after American astronomer Daniel Kirkwood, is 68 km in diameter.

What are lunar craters:

Lunar craters are circular depression on the surface of moon .Craters on the moon are caused by asteroids and meteorites colliding with the lunar surface.

Chandrayaaan 2 was launched from Earth on July 22. On September 7, Lander Vikram will soft land in the South polar region of the moon. Chandrayaa2, which is a second lunar expedition will shed light on a completely unexplored section of the moon - its South Polar region. Chandrayaan 2 successfully entered the lunar orbit on August 20.

Realme 5 to go on sale at 8 pm today via Flipkart, Realme.com; check out price, offers, specifications