Despite an economic slowdown, the United States remained a healthy market for PC shipments, growing 7.0 per cent year-on-year at 17.9 million units in Q4 After failing to register growth for eight years, the global personal computer (PC) market has recorded its first full-year growth in 2019. According to research firm Canalys, a total of 268.1 million units were shipped globally in 2019, up 2.7 per cent on 2018. Of this, close to two-thirds of all shipments were contributed by the top three vendors including Lenovo, HP and Dell. This includes desktops, notebooks and workstations.

"PCs had a decent holiday quarter," says Ishan Dutt, Canalys Analyst. "This is impressive given the market registered record growth in Q3. Despite supply chain issues, vendors remain bullish, especially in commercial. Intel's continued efforts to improve supply will help maintain volume in 2020, but constraints are unlikely to ease quickly. The upshot, however, is the upgrade opportunities OEMs have with SMBs who have delayed refreshes in anticipation of new chipsets." 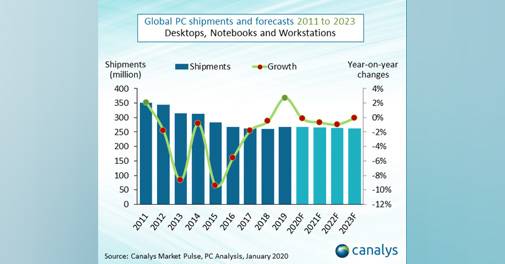 "(The year) 2020 is unlikely to repeat the success of 2019. Macroeconomic factors continue to influence the PC industry heavily, as key markets like the US, Japan and India are expected to under-perform, for the major part of the year. Adding uncertainty to the market is a possible disruption to HP, which continues to be the target of a hostile takeover by Xerox. 5G and foldable displays will bring some excitement to otherwise iterative upgrades," says Rushabh Doshi,  Research Director, Canalys.

Doshi added: "However, vendors remain in an experimental phase for both these features. Foldables suffer from a serious lack of use-cases, and demand is unlikely to grow unless second or third-generation devices can prove durability. 5G on the other hand, needs ecosystem readiness from network operators and cloud providers to justify the value offering of these devices. Mainstream adoption of 5G and foldable displays is still a good two to three years away."

As per the research, despite an economic slowdown, the United States remained a healthy market for PC shipments, growing 7.0 per cent year-on-year at 17.9 million units in Q4.

The Trump administration's decision to delay proposed tariffs led to stronger than expected spending in the crucial consumer holiday, allowing retailers to absorb additional inventory. In Europe, Brexit remained a critical issue in Q4. Shipments grew about 2 per cent in EMEA, below the global average.

However, UK businesses now at least have short-term certainty, as the UK leaves the EU on 31 January 2020, even if a long-term trade deal is still some way off. PC shipments will likely accelerate as channels build inventory ahead of the UK departure date, as distributors are nervous about subsequent product delays between Northern Ireland and the rest of the UK.

WhatsApp will stop working on these smartphones from Feb 1; here's how to export chat history