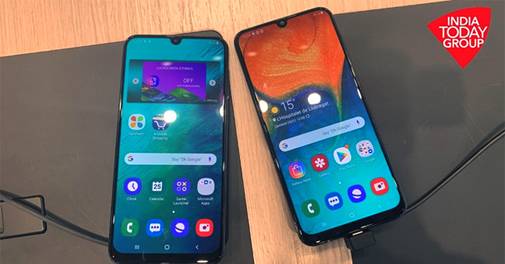 Samsung to launch for Galaxy A50, Galaxy A30, Galaxy A10/PC: India Today

Samsung is holding a launch event for Galaxy A-series phones in Mumbai today. Samsung had unveiled Galaxy A30 and Galaxy A50 at MWC 2019 and there are rumours that the company would also launch a cheaper model called the Galaxy A10 today. Galaxy A30 and Galaxy A50 feature Infinity-U Super AMOLED display with 4,000mAh battery. The display also houses an in-screen fingerprint sensor.

As far as specifications are concerned, the Samsung Galaxy A30 features a 6.4-inch Super AMOLED Infinity-U Display panel with full-HD+ resolution and 19.5:9 aspect ratio. Under the hood, there is an octa-core SoC, coupled with 3GB and 4GB RAM options and 32GB as well as 64GB of inbuilt storage. The smartphone also comes with microSD card support. Similarly, the Samsung Galaxy A50 also comes with a 6.4-inch Super AMOLED Infinity-U screen with full-HD+ panel and a 19.5:9 aspect ratio. The phone comes with an octa-core SoC, paired with 4GB RAM/ 6GB RAM and 64GB/ 128GB storage onboard storage options along with microSD card support (up to 512GB).