Cryptocurrency is playing a vital role as Ukraine-Russia war escalates

Ukraine has managed to raise millions via cryptocurrency donations already, however, it is not known yet what they intend to use it for.

Crypto donations have been pouring in for Ukraine

As the war with Russia rages on, Ukraine has managed to raise more than $8 million in cryptocurrency following appeals made on social media. The donations poured in globally in the form of Bitcoin and other digital tokens after Ukraine’s official Twitter account made an appeal for cryptocurrency donations and posted digital wallet addresses for tokens including bitcoin and ether.

Ukraine’s Vice Prime Minister Mykhailo Fedorov also shared wallet addresses on Twitter asking people to “stand with the people of Ukraine” on February 26 and by 4 PM on February 27, as per reports, the wallet addresses had “received crypto worth $7.9 million across almost 11,500 donations”. This was tracked by a London-based country called Elliptic that tracks the movement of digital coins on the blockchain.

More recent reports state that the country so far has received at least $11 million through anonymous Bitcoin donations, according to cryptocurrency analysts.

Ukraine’s “crypto crowdfunding appeal” is being called “unprecedented” since it is the first time ever that any country has requested direct donations in digital tokens. Reports state that is not clear yet what Kyiv plans to use these funds for. Additionally, Elliptic pointed out that crypto donations to Ukrainian volunteer and hacking groups are also spiking since Russia began its attacks on Thursday. The donations to these groups, some of which “have supplied equipment to government forces”, as a Reuters report suggests, have been growing since January as Russia started positioning troops near the Ukraine border.

Appeal for crypto donations was also made by Ukraine’s central bank and by Russian band Pussy Riot via a crypto-linked organisation launched by them, while several other groups also followed suit. Billionaire Sam Bankman-Fried shared on Twitter that his company is “giving away money to Ukrainians”. Bankman-Fried, CEO of crypto exchange FTX US, posted that they had given $25 to each Ukrainian on their platform.

we just gave $25 to each Ukrainian on FTX

do what you gotta do

This strong influx of crypto donations shows that in current times of crisis, cryptocurrencies have become the alternate option for donors who would have otherwise sent their money to large charities like Red Cross. 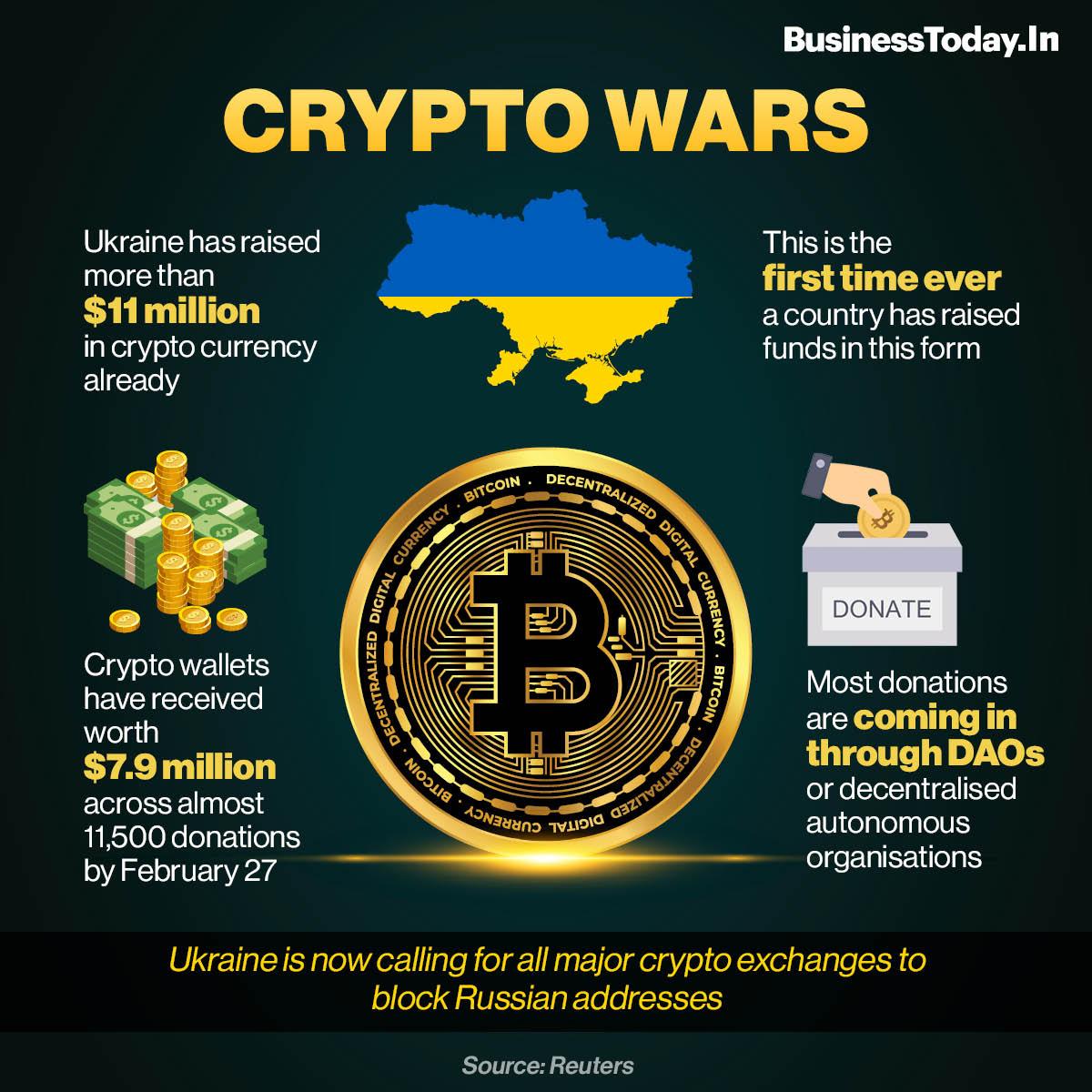 While there are traditional fundraising campaigns running on Facebook and other social media platforms, most of the crypto donations came in through decentralised autonomous organisations (DAOs). DAOs are member-owned organisations that use blockchain tech to raise funds through cryptocurrencies.

The money that Pussy Riot has raised came via the UkraineDAO the band announced on Twitter. This organisation is raising funds for civilian organisations like Kyiv’s non-profit Come Back Alive and Proliska which is a humanitarian organisation that helps civilians in separatist areas of Luhansk and Donetsk.

good orgs to donate, recommended by our ukranian colleagues:

Pussy Riot founder Nadya Tolokonnikova explained during a live conversation on Twitter Spaces that “Crypto is borderless, permitless and it's so much easier and faster than fiat”, which makes it the token of choice in a situation like this one.

“One of the main promises that crypto hopes to bring to people is being able to access financial tools that might be difficult in many parts of the world to access otherwise,” FTX President Brett Harrison said in a live-streamed chat.

Come Back Alive posted on Facebook that they have raised 20.5 million hryvnia or $691,000 already.

“You helped the military more yesterday than you did in 2021,” Come Back Alive, which has been collecting money through Patreon, Bitcoin wallets, and Swift accounts, posted on Wednesday and the organisation “has about 109 Bitcoin in its wallet, or about $4.3 million”.

Also, with certain financial institutions implementing limits and restrictions on fundraising, crypto has become the easier way to get things done. According to reports, commercial money-transfer platform Wise has limited transfer to Ukraine to the equivalent of 2,500 in dollars, pounds, and euros, since it is “more difficult to operate right now”, but the company said that it is going to offer its services for “as long as we are able to do so”.

Patreon on the other hand, as a spokesperson told Bloomberg, does not allow campaigns “involved in violence or purchasing of military equipment, regardless of their cause”. Come Back Alive’s funding page on Patreon was deleted without any warning and the company has said in a blog post that all contributors will be refunded.

While crypto donations for Ukraine continue to pour in, the country has raised its voice against Russian crypto users. Vice PM Fedorov appealed to all major crypto exchanges on Twitter asking them to block addresses of Russian users. He has also asked for information on digital wallets associated with Russian and Belorussian politicians and said that the Ukrainian crypto community was ready to offer generous rewards.

Ukrainian crypto community is ready to provide a generous reward for any information about crypto-wallets of Russian and Belarusian politicians and their surroundings. War crimes must be pursued and punished! To share info please contact in Telegram: https://t.co/XHidwUQ8bE.

The main idea behind this move is to cut Russia off in every way possible. Some countries like the US have already agreed to disconnect some Russian banks from SWIFT (which is a messaging system that is used amongst banks globally for transactions) along with other international sanctions to “isolate Russia from the global financial system”.

It's crucial to freeze not only the addresses linked to Russian and Belarusian politicians, but also to sabotage ordinary users.

The next step would be to try and cut Russia off on the crypto exchanges while citizens try to figure out other ways, like crypto, to handle and move their wealth.