The annual Norton Cyber Crime report estimates that India suffered losses of approximately $8 billion due to cyber crime in 2011.

Nandagopal Rajan
The annual Norton Cyber Crime report estimates that India suffered losses of approximately $8 billion due to cyber crime in 2011. Globally, the loss is estimated at $110 billion.

The report, which is the result of one of the world's largest consumer cyber crime studies, estimates that 42 million Indians have become victims of cyber attacks in the past 12 months. 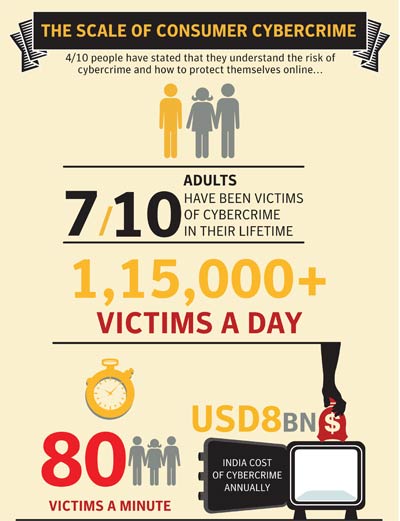 "Their success is also fuelled by our love for free mobile apps and our unfounded trust of links posted by friends on social networks," he said.

Hall says most people make themselves and their friends vulnerable due to their tendency to overshare personal information and links. No wonder then that a fifth of social network users have reported that their accounts have been hacked into.

In India, 32 per cent of online adults have been victims of social or mobile cyber crime in the past year - 22 per cent of all social network users have been attacked in some way with 15 per cent becoming links of scams and fake links. Click here to Enlarge
Only 56 per cent online adults in India understand the risk of cyber crime and know how to protect them. And 67 per cent of them realise they have been attacked only when their computer crashes or slows down, says the report. This could be because a similar number of people don't know that malware can actually work in the background stealing your valuable information.

The report found that a fourth of online users still don't use a strong password or change it at regular intervals.