Chinese vendor Vivo, grew shipments by close to 50 per cent, overtaking Samsung for the first time to take second place Despite the impact of a nationwide lockdown in the final week of March due to the outbreak of coronavirus, Indian smartphone shipments grew 12 per cent in the Q1 2020. A total of 33.5 million units were shipped in the first quarter of this year, as compared to 30 million units in the same quarter last year. While the top five players remained the same, for the first time, Vivo has toppled Samsung for the second position.

Since the last many quarters, Xiaomi has been at the number one position and it continued to dominate with a 30.6 per cent market share, accounting for 10.3 million smartphones in the quarter. Its continued investments in local production and supply chain, coupled with an efficient online and offline channel strategy, were its core strengths. Xiaomi remained the runaway leader in India, while its rivals had mixed fortunes. 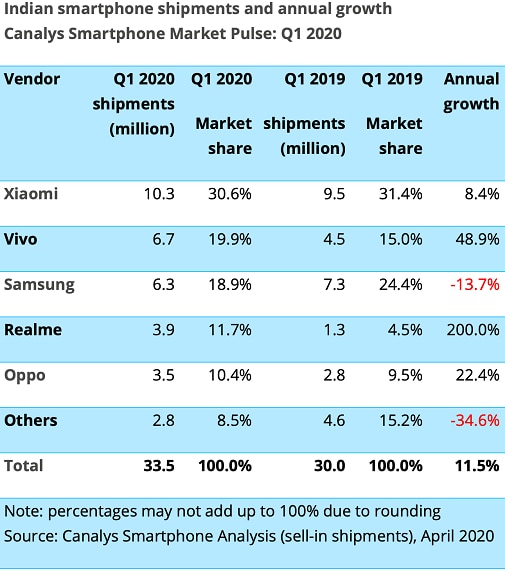 Chinese vendor, Vivo, grew shipments by close to 50 per cent, overtaking Samsung for the first time to take second place. Vivo shipped close to 6.7 million units, with about 19.9 per cent share. However, as compared to the 7.3 million units shipped in first quarter, last year, Samsung shipped 6.3 million units during the same period this year. It registered a decline in annual growth of 13.7 per cent. Samsung's market share fell from 24.4 per cent to 18.9 per cent. Although Realme maintained fourth place with 3.9 million units, it registered a massive 200 per cent annual growth. Oppo finished fifth, with 3.5 million units accounting to nearly 10.4 per cent market share.

"Vivo's victory is bitter-sweet," said Canalys Analyst Madhumita Chaudhary. "The high sell-in this quarter was mainly due to planned stockpiles ahead of the high-profile Indian Premier League (IPL). However, the unplanned lockdown at the end of March has disrupted the vendor's plans. With IPL postponed, and much of its inventory in offline channels locked out, Vivo will struggle to see a quick sell-through when the lockdown lifts."

However, Canalys expects smartphone shipments in India to plunge in Q2 2020, as the lockdown remains in force up to May 3 and vendors grapple with both supply and demand issues in the immediate future. "All eyes are glued to the TV sets in hopes of returning to normal," added Chaudhary. "While parts of India emerge out of the lockdown and the government works out an exit strategy, worker availability, which depends heavily on opening state borders and allowing public transport, will be a key issue for vendors and ODMs. Additional manpower regulations due to COVID-19, like in China, is likely to slow down resumption activities in factories across India, directly impacting production capacity. Consumer demand, however, is likely to be more robust. Online channels are likely to emerge the winners as public fear of the virus deters consumers from buying offline."

Also Read: Coronavirus Impact: 4 crore people to be mobile less by May end if restrictions not lifted, says ICEA