Realme has already launched the C11 that comes with a MediaTek Helio G35 processor and two rear cameras. 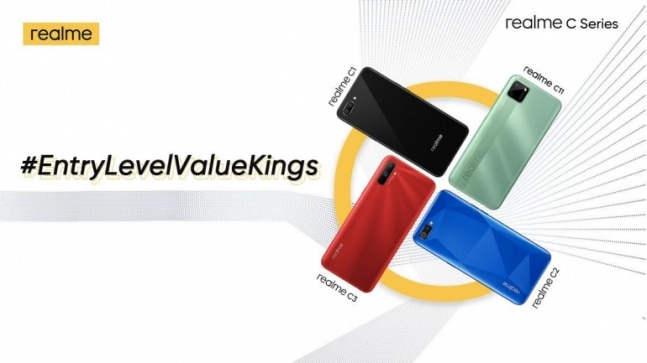 Realme has teased it will soon launch new C-series smartphones in India. They could be the C15 and C12 that will join the C11, which was launched only a few weeks back. The Realme C15 is already available to buy in Indonesia while Realme C12 seems in the pipeline if multiple benchmarking listings are to be believed. Among the listings, C12 has also been spotted on India's Bureau of Indian Standards (BIS) website hinting that the smartphone is nigh. So, the recently-rejigged Realme C-series will see the launch of Realme C12 and Realme C15 in India soon.

According to the tweet posted by Realme India, "The new #EntryLevelValueKings are ready! #ComingSoon." Since the tweet suggests plural, there are two C-series phones set to arrive in India soon. The launch date, however, has not been revealed by the company yet, but considering the teasers are in, it will not be far. The company also emphasised that the C-series was launched "with one objective", which is "to provide best-in-class features & the realme experience for every Indian."

For example, the Realme C15 has a fingerprint sensor additionally, unlike the Realme C11 that only relies on facial scanning and conventional passwords for unlocking and authentication. This will add an extra layer of biometric security to various functionalities on the smartphone. Another aspect that sets Realme C15 apart from the Realme C11 is the extra third sensor at the back. The Realme C11 has only two cameras at the back for its price.

The Realme C12 is going to be a mix of both Realme C11 and Realme C15. A lot is not known about the Realme C12 yet but whatever is available has hinted that there will be a 6000mAh battery, a MediaTek Helio G35 processor, Android 10 OS, and 3GB RAM on the smartphone. Assuming it will sit between the C11 and C15, the C12 could also have a waterdrop-notch HD+ display and three cameras at the back, if not two. In any case, we will get to know more about the Realme C12 in the coming days.