Galaxy Mega 5.8 is without doubt a giant among the big five-inchers. However, the device is not too easy to grip.

Everyone has a five-inch screen. So trust Samsung to think of something odd. The Korean tech giant has pushed the far further by launching two new phablets with 5.8- and 6.3-inch displays.

Devices with 3.5-inch, 5-inch, 5.8-inch and 6-inch screens
We tested the Galaxy Mega 5.8, which cannot be called big in any respect. It is without doubt a giant among the big five-inchers. Unlike with the Note II, Samsung hasn't been thoughtful about keeping the device thin and easy to grip. 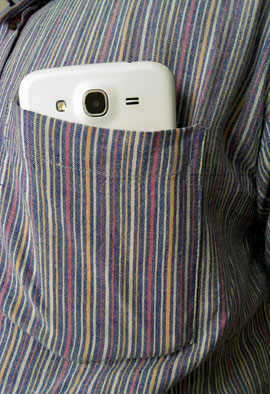 Galaxy Mega 5.8 popping out of a shirt pocket
So throughout the review, we feared the phone will slip out of our hands. Plus, it is not safe in your shirt or trouser pocket and will keep popping out. Put it inside a pair of tight jeans and you stand the risk of cracking the screen.

The Mega 5.8's design is not much different from any other Samsung Galaxy phone, with curved edges and a single physical key below the extra-large screen.

The TFT LCD display has 540x960p resolution, while there is a very Samsungy glossy plastic at the back. Remove the back cover and you have a huge 2600 mAh battery and two microSIM slots.

Switch on the phone using the power key on the side and your are greeted by the same old user interface. You will need to use both hands to type anything on this screen. Thankfully, press the setting icon in the keyboard for long and you can call a smaller keyboard that can be repositioned to the right or left by dragging, like in the Note II. But even here, using it with a single hand is a bit difficult due to the huge built. 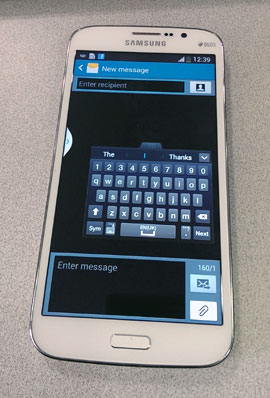 The device allows single-hand keyboard operation also
Samsung has a new setting for one-handed operation, using which we were able to reposition the dial pad, calculator keypad and adjust the scale of the unlock patter for single hand use.

There were some instances that made us happy about the extra real estate. This included reading websites without zooming in, watching videos and playing games. But the low resolution display is a dampener.

Samsung doesn't think it necessary to pre-install any third party apps and you will have to spend a few minutes doing this. The notification bar at the top comprises all shortcuts to commonly used settings. Some features from high-end Galaxy phones have also been added.

For instance, the Smart Stay prevents the screen from getting locked when one is looking at the display. There is also a blocking mode that disables specific notifications when needed. Lastly, there is a multi-window mode that allows two different apps or browsers to be launched and viewed simultaneously.

The Mega 5.8 is not as powerful as it looks and is powered by a 1.4 Ghz dual-core processor and 1.5GB RAM. This is good for daily tasks, but slows down the phone while playing heavy games or running some apps in the background.

The 8MP camera onboard captured sharp and detailed images during daytime, though with very iffy colour reproduction. Images captured indoors were not that impressive.

Of the 8GB internal storage available on Mega 5.8, only close to 4.9 GB is available to the user.

The 2600 mAh battery used is good enough to last a day.

BAG IT OR JUNK IT:
Get something more powerful if you don't need the large screen.