The total annual recurring revenue (ARR) of Indian SaaS firms has grown four times to $12–$13 billion in 2022, while investments into this sector has risen six times to $5 billion over the past five years.

What’s behind India’s growth as the second-largest SaaS ecosystem globally?

The Indian Software-as-a-Service (SaaS) ecosystem has become a global leader behind only the US in scale and maturity, according to a report by global management consulting firm Bain and Company.

The total annual recurring revenue (ARR) of Indian SaaS firms has grown four times to $12–$13 billion in 2022, while investments into this sector has risen six times to $5 billion over the past five years.

“When we speak of India’s position as the second largest ecosystem, we look at the proliferation and prominence of SaaS companies. Historically, India has been behind markets such as the UK and Israel when it comes to the creation and growth of globally-oriented SaaS companies. While India has been building world class SaaS products for some time, we have seen a meaningful acceleration in the overall ecosystem over the past 3 years,” Gustaf Ericson, Associate Partner at Bain & Company, told Business Today. He is of the opinion that Indian SaaS companies have been able to develop world-class products, launch them into large SaaS end-markets such as the US with a refined go-to-market playbook and win on product quality, cost competitiveness and service quality.

The report estimates Indian SaaS companies to grow 20-25 per cent per annum to reach approximately $35 billion in ARR and capture about 8 per cent of the global SaaS market by 2027.

It should be noted that the report calls India the second-largest SaaS ecosystem by number and prominence of companies, not market size. From a domestic SaaS spend standpoint, US has a giant lead with about $140-150 billion, followed by UK with $13-15 billion and India at $2-3 billion. However, India’s domestic SaaS market has been growing at 30-35 percent CAGR compared to 20-25 per cent and 15-20 percent of growth of UK and US markets respectively.

“The US remains the largest SaaS ecosystem, followed by India. Subsequently the UK and Israel are other key SaaS ecosystems. When we think of market size, as our report suggests, markets such as the US and UK are larger, however Indian SaaS companies are going after global SaaS end-markets,” Ericson said. 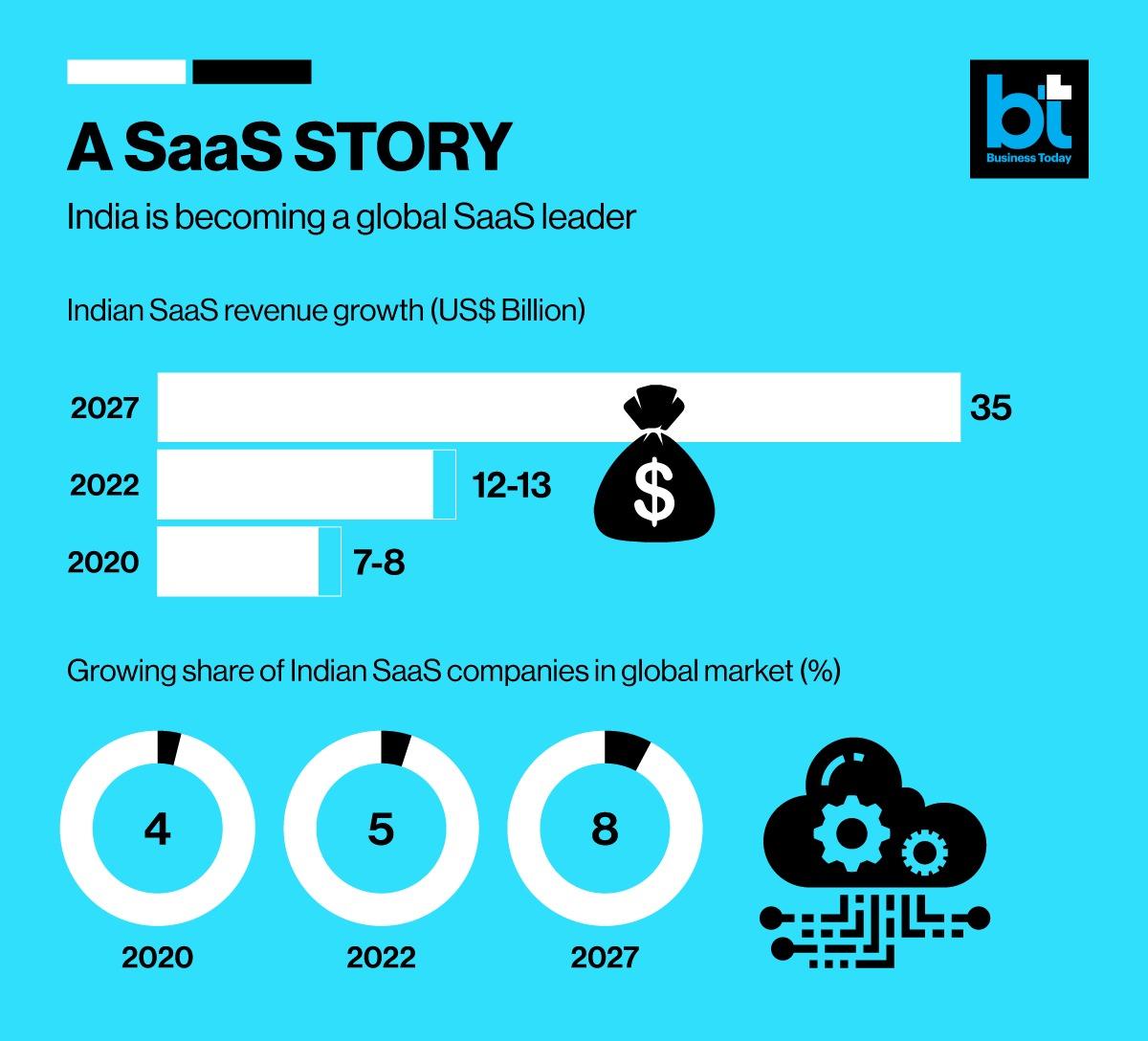 The report predicts a positive buyer sentiment for SaaS with approximately 65 per cent of enterprise software decision makers expecting to increase their 2023 software budgets.

Indian SaaS companies are being founded in record numbers. The number of funded SaaS companies grew over 2x to 1600 in 2022, from 750 in 2017. The study finds that 14 of the 1600 companies that have now been funded over the past five years in India have exceeded $100 million in ARR (compared to around 5 in 2020) and are reaching this growth milestone as quickly as their US counterparts.

Indian SaaS firms have raised a total of $5.1 billion in 2022, which is a record till date, though funding slowed down 40 per cent year-on-year across quarters two through four as global sentiment has softened.

Investors clocked about 40 SaaS exits in 2022, almost doubling year-on-year, across a variety of modes. Consequently, more than 70 per cent of investors expect to increase their investment in Indian SaaS going forward, the report said. Growth has primarily been driven by increased interest in earlier-stage deals; there are more seed deals happening (+65 per cent vs. 2021) that are larger ($1.7 million vs. $1.3 million average in 2021), while the number of Series A investments have nearly doubled (+90 percent vs. 2021) as a greater supply of companies meets more early-stage capital across existing and new investors. Later-stage deals have become smaller (~$75 million average vs. ~$100 million in 2021) as some of the largest Indian SaaS companies choose not to raise in prevailing market conditions.

“This commercial traction, with 12-14 Indian SaaS companies having exceeded $100m in ARR by our estimation, has attracted domestic and international investors across stages from venture to private equity - who are giving Indian SaaS companies the resources to further scale,” Ericson added.

The Indian SaaS ecosystem has gone from being nascent with concentration in certain categories to an increasingly mature one with presence across many subsectors.

Horizontal business attracted the largest amount of investment (nearly 70 per cent of 2022 investments), followed by horizontal infrastructure and vertical businesses (around 15 per cent each). The report projects that over the next 12 months, about 90 per cent of SaaS investors will increase or maintain their capital allocation to the sector driven by strong business economics, path to scale, and successful exit trends. Investors count dev tools, CRM, and logistics tech among the most exciting sub-sectors.