A lot has changed with the iconic Apple iPhone since Steve Jobs unveiled its very first version back in 2007. As it remains one of the most talked about topics in the tech world, here's how it has evolved into the iPhone we see today. 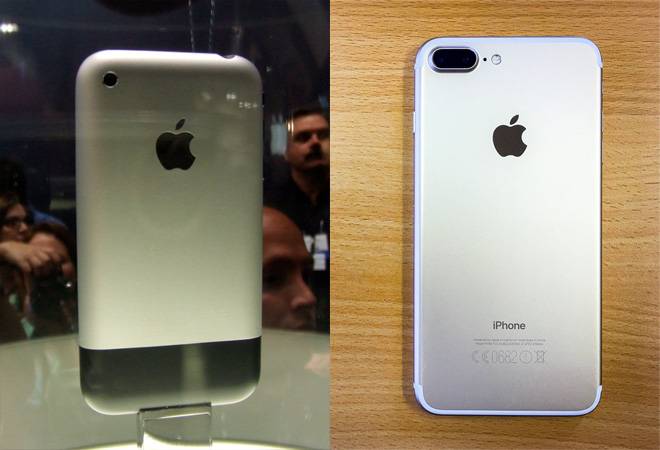 Since Steve Jobs unveiled the first ever Apple iPhone back in 2007, the iconic device has changed a lot. With the company set to launch the much-hyped iPhone X tomorrow to mark the 10th anniversary of the smartphone line, here is a peek into how Apple iPhones have evolved over the course of time.

January 9, 2007 is the day it all began. Steve Jobs took the stage at Apple's Macworld with a tagline - 'Apple reinvents the phone' - and reinvent it did. The first Apple iPhone was an amalgamation of a mobile phone, iPod with touch controls, and an internet communication device, becoming the one of the initial multi-utility smartphone, the likes of which we are familiar with today.

The camera on Apple iPhone was a 2-megapixel snapper which could only capture images and not videos.

The world was moving on to 3G networks and Apple moved along with it. A year after creating enough ripples with the launch of Apple iPhone, the Cupertino-based tech giant was back with iPhone 3G - an upgrade on the original iPhone, now with 3G support.

The internals remained the same, more or less. The 4GB variant was ditched, though, and Apple released only 8GB and 16GB variants for iPhone 3G. Also this was the first Apple phone to be equipped with A-GPS, however there was no Google Maps on the iPhone 3G, like its predecessor.

The Apple iPhone 3GS marked the beginning of another trend in the smartphone world - naming upgraded devices by adding a suffix to the name of the predecessor. The iPhone 3G was a year old when Apple came up with Apple iPhone 3GS, with changes in the features and specifications seen in the former device. Notably, this was the first Apple phone to have a 32GB variant.

Apple also amped up their camera game with iPhone 3GS, equipping it with a 3.15-megapixel snapper. The camera came loaded with geo-tagging and autofocus and touch-focus, and can now also capture videos in 480p at 30fps.

The first change in iPhone design language was seen on the fourth smartphone out of Apple stables. The Apple iPhone 4 came to the store shelves with sharp edges and a blocky design in June 2010. Although the screen was still 3.5 inches long like the devices before, it now had a resolution of 640x960 pixels.

The camera was a 5-megapixel unit with LED flash. Moreover, it could capture HD videos in 720p at 30 fps. Equipped with a VGA front camera, Apple iPhone 4 also saw the advent of selfie camera in iPhones. The camera could be used for video calling, but over Wi-Fi networks alone.

The camera was also given a shot in the arm, making it an 8-megapixel unit with additional features like HDR photo and face detection. It could also capture full HD videos in 1080p in 30fps. The secondary camera, although remained VGA, could now be used to make video calls on Wi-Fi and 3G networks, both.

The Apple iPhone also brought with it a personal assistant which could be called forth when needed. Siri, the voice-activated smart personal assistant developed by Apple, was the first of its kind, changing the way smartphones are used. Siri could be used to take commands and dictations in a conversational language.

With telecommunication entering the new era of 4G networks, Apple came up with iPhone 5, its first 4G phone, in September 2012. And there were changes on the very face of it. The screen for the first time touched the 4.0-inch mark, with a resolution of 640x1136 pixels.

The selfie camera was also upgraded from VGA to 1.2-megapixel which can shoot videos in 720p at 30fps.

The company launched Apple iPhone 5c as an answer to those who thought iPhones were a drab affair and only the rich could afford. This was the first instance when Apple ventured into a colour palette different from the black and white it had stuck to regarding iPhones. For the first time iPhones was released in blue, yellow, green and pink, along with white.

This also was the time when Android phones were dominating the market with their pocket-friendly price tags and abundant specifications. Keeping the features and specifications same as the Apple iPhone 5, the 64GB variant of iPhone 5c was dropped to keep the prices low, releasing only 8GB, 16GB and 32GB variants.

Apple iPhone 5s was the first device from the company which came with a fingerprint sensor. The biometric sensor was mounted in the home button below the screen. The camera was also upgraded, now capable to shooting videos in 720p at 120 fps, along with the usual capabilities of its predecessor.

Another change in deign language of iPhone family was seen with the launch of Apple iPhone 6 and iPhone 6 Plus. The phones now showed antenna bands at the back panel of the phone instead of the glass panel of its predecessors. The screen size was increased to 4.7 inches in iPhone 6 and its resolution to 750x1334 pixels. The iPhone 6 Plus had an even bigger 5.5 inch screen with 1080x1920 pixel resolution. The iPhone 6 also came with a 128GB variant, a first for Apple.

Both devices also supported Apple Pay, a NFC-based service where payments could be made by merely touching the phone to a payment terminal.

The biggest upgrade Apple's iPhone 6s and iPhone 6s Plus saw was that in the camera. These two devices now sported a 12-megapixel snapper in the back with simultaneous 4K video recording and 8MP image capturing. In the front, the selfie camera was upgraded to 5-meagapixel with video capture in 1080p at 30 fps and in 720p at 120 fps.

Apple iPhone SE was another attempt from the company to sell an iPhone which did not break the bank. The screen was shortened once again to 4.0 inches with a resolution of 640x1136 pixels, last seen on iPhone 5. Although the primary camera was similar to other phones in the same generation, the secondary camera was downgraded to a 1.2-megapixel unit.

Apple iPhone 7 Plus became the first ever device from the company to feature a dual camera setup, with two 12-megapixel units at its back. The Apple iPhone 7 still sported a single sensor camera.

Another change drew criticism for these two phones, though, was scrapping the 3.5mm jack. To compensate for the missing audio jack, Apple launched the wireless Apple AirPods alongside Apple iPhone 7 and 7 Plus.

Google's 'Android One' is back: New devices breathe life into affordable smartphone range