TweetDeck, Twitter's alternative client for advanced users, is about to get a big redesign. 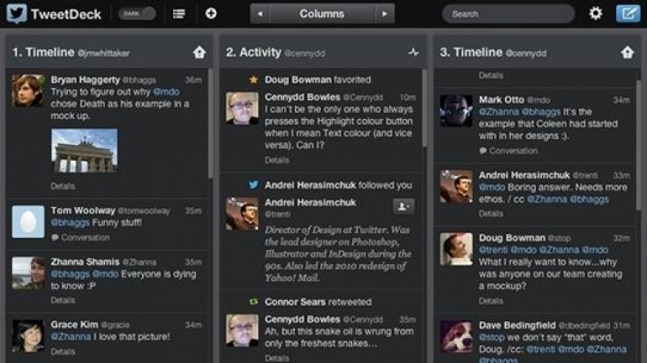 Tweetdeck was launched in 2009 and bought by Twitter two years later in 2011. It is often referred to as the better alternative to Twitter and has not had much further development outside of some relatively minor tweaks, updates, and patches along the way.

Most of Twitter's biggest features have been reserved for its core web and mobile apps, resulting in TweetDeck going from being one of the best ways of viewing Twitter feeds into something that looks outdated and light on features. It's still a great example of the strength of its original design that millions of people prefer using TweetDeck to interact with other people on Twitter.

According to Twitter product chief Kayvon Beykpour, the third-party account management app is all set to receive a "big overhaul". Beykpour an interview with The Verge, revealed that Twitter is going to be making some pretty big changes in the coming year, with TweetDeck being factored into those plans, "We haven't given TweetDeck a lot of love recently. That's about to change; we've been working on a pretty big overhaul from the ground up of TweetDeck, and it's something that we're excited to share publicly sometime this year. And so that's just an example of a Twitter-owned and operated service that we will continue investing in. We also, over the last five years, I think, haven't given a lot of love to our developer ecosystem. A bunch of reasons for that, some missteps that we'd taken in the past, then also sort of prioritization. We are also changing that; in the last year and a half, we've really stepped up both our commitment and follow-through on just innovating around the API again, getting the API back to parity from our own internal APIs that we use to build functionality."

It's still uncertain what exactly Twitter has planned for TweetDeck. It could be a revamped UI or re-launching the Windows application that was discontinued in 2016. There is still hope that Twitter will allow TweetDeck users to once again manage accounts across multiple social media platforms. This could be done via a premium subscription model.

With so much getting posted on Twitter at any given point in time, a tool like TweetDeck is incredibly useful, especially for big news organisations or companies that want to keep abreast of all that information.

OnePlus 9, OnePlus 9 Pro get 3C certification ahead of launch

Micromax IN 1 specifications leaked ahead of March 19 launch