CAA Protests: More violence in UP, death toll climbs to 16

The state police said over 260 security personnel were also injured, of whom 57 suffered gunshot wounds 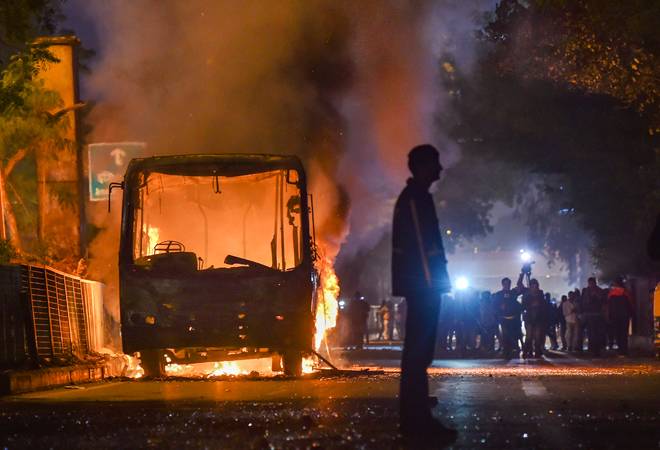 Violence broke out on Saturday during demonstrations against the amended Citizenship Act in Uttar Pradesh as protesters indulged in arson and clashed with police in Kanpur and Rampur, leaving one person dead, while large-scale vandalism and disruption of rail and road traffic were witnessed in Bihar during a bandh called by the opposition RJD.

At least 16 people have been killed in violence during anti-CAA protests in Uttar Pradesh since Thursday. The state police said over 260 security personnel were also injured, of whom 57 suffered gunshot wounds.

Protestors set ablaze Yatimkhana police post in Kanpur and indulged in heavy brick batting, leading to injuries to many people including policemen, a senior official said. Police used cane charge and tear gas to chase them away.

One person died and several people, including policemen, were injured in clashes between anti-CAA protesters and police in Rampur, officials said. Five two-wheelers and a car were set afire during the violence and five protesters were injured in police lathi-charge, they added.

A day after massive protests and clashes in the national capital, Bhim Army chief Chandra Shekhar Azad was arrested when he came outside Jama Masjid, where he had taken part in a demonstration on Friday and was later sent to judicial custody for 14 days by a court.

Police and paramilitary personnel carried out a flag march in violence-hit areas, even as scores of people held peaceful demonstrations against the amended Citizenship Act at several places, including at India Gate, Jamia Millia Islamia, Rajghat, Uttar Pradesh Bhawan. Police said no untoward incident was reported.

Fifteen people arrested for Friday's violence in Daryaganj were remanded in judicial custody for two days, while 11 others were sent to jail for a fortnight in connection with the Seemapuri incident.

The situation in Assam, where protesters carried out rallies against the amended law, and West Bengal was peaceful while mobile internet services were restored in Meghalaya.

In Bihar, carrying bamboo sticks and party flags, supporters of bandh called by Rashtriya Janata Dal, against the amended Citizenship Act gathered at bus stands, railway tracks and other vantage points in all districts of the state since the crack of dawn, unfazed by the winter fog and chilly winds.

They squatted on railway tracks, disrupting train movement, and blocked bus terminuses at various places to enforce the day-long bandh.

The protesters also smashed windshields of taxis and three-wheelers and damaged cycle-rickshaws that plied on the roads in defiance of the call for the shutdown at the towns of Bhagalpur, Muzaffarpur and outskirts of Patna.

Protests continued in other states, with many being led by opposition parties. CPI-M activists tried to block trains at the railway station in Chennai but their attempts were foiled by police.

The Congress in Kerala led by its top leaders held demonstrations in all district headquarters of the state. There were scuffles at several places in Tamil and Kerala between police and protesters who tried to break barricades.

Karnataka Chief Minister B S Yediyurappa visited Mangaluru and met the families of two persons who were killed in police firing there on Thursday during violent anti-CAA protests.

Police detained CPI Rajya Sabha MP from Kerala Binoy Viswam and some party activists who staged a protest in the city against the CAA defying curfew.

Amid the countrywide stir against the Citizenship Act, BJP ally Shiromani Akali Dal (SAD) urged the Centre to include Muslims in the new law by bringing an amendment to it, and said there should not be any exclusion based on religion.

"We strongly feel that the Muslim community should be included in it (amended Citizenship Act)," SAD president Sukhbir Singh Badal said in Patiala.

BSP president Mayawati asked the Centre to give up its "stubborn stand" on the new citizenship law and NRC and withdraw its decisions as now "voices opposed to the CAA and NRC have started coming from within the NDA".

Unfazed by the criticism, the BJP announced that it will start a mass contact programme to expose opposition parties' "lies" and apprise people of the details of the law to assure them that it is not against existing citizens.

Party general secretary Bhupender Yadav told reporters that the BJP, within the next 10 days, will contact more than three crore families, organise a rally in every district and hold over 250 press conferences across the country.

Despite restrictions on movement and Internet services, BJP-ruled Uttar Pradesh, which was hit by large scale violent protests after Friday prayers, saw more clashes on Saturday.

Amid a bandh call in Rampur against the CAA, around 400 to 500 protestors, including children in the age group of 12-18 years, gathered at some distance from the Eidgah in the city and stones were pelted at policemen, leading to clashes, officials said.

"Of the five injured, four were referred to Meerut for treatment where one died, while another is in a serious condition. Around a dozen protestors have been detained," District Magistrate (DM) Aunjaneya Singh told PTI.

Samajwadi Party MLA Amitabh Bajpai was arrested as a precautionary measure and his vehicles seized in Kanpur, police said.

After a lull of four days, the Aligarh Muslim University campus again witnessed protests with hundreds of non-teaching staff joining hands with teachers' association to oppose the CAA and police action against students.

The AMU has set up a one-man judicial panel to conduct an internal inquiry into violent incidents that took place on the campus on December 15 and 16.

Police earlier said at least 15 people, including an eight-year-old boy, lost their lives in the state since Thursday.

Director General of Police O P Singh claimed women and children were used as "shields by the protestors". He maintained that police did not open fire and suggested the deaths were due to cross firing between protestors.

"We are clear and transparent in this. If anyone died due to our fire we will conduct a judicial inquiry and take action. But nothing happened from our side," he said.

So far 218 people have been arrested in Lucknow, he said.

The Internet had been suspended in major cities, including Lucknow.

Tejashwi Yadav, leader of the opposition in Bihar Assembly, marched in a large procession against the amended Citizenship Act from the party office in Bir Chand Patel Marg in Patna to Dak Bungalow crossing, throwing traffic on the busy Fraser Road and Bailey Road out of gear.

At some places in Patna, workers of the RJD, known for their strong-arm tactics to enforce bandhs, presented people with roses and urged them with folded hands to support the shutdown in "national interest".

The shutdown, which came two days after a bandh was called on the same issue by Left parties, is being supported by other constituents of the Grand Alliance like the Congress and the Rashtriya Lok Samata Party (RLSP).

Movement of at least seven trains was affected for periods ranging from 30 minutes to over an hour at various stations, the East Central Railway, headquartered at Hajipur in the state, said in a statement.

In Muzaffarpur, the largest north Bihar town, RJD and Congress leaders sat on highways, major road and railway crossings to enforce the bandh. At places like Brahmpura, they clashed with shopkeepers who were reluctant to down their shutters.

Reports of the bandh disrupting normal business and vehicular traffic have been received from districts like Munger, Bhagalpur, Begusarai, Jehanabad and Nawada as well.

In Meghalaya, curfew imposed in Sadar and Lumdiengjri police station limits in Shillong was relaxed for 16 hours from 5 am on Saturday and no untoward incident was reported in these areas in the past 24 hours, East Khasi Hills District Magistrate M W Nongbri said.

The curfew imposed in Dibrugarh following violent protests against the Act was relaxed for 16 hours since 6 am on Saturday as the law and order situation improved, they said.

Mobile internet services were restored on Friday in Assam after nine days of its suspension while broadband services had resumed on December 18.

According to sources, the West Bengal police have stepped up vigil and beefed up security arrangements in various parts of the state in order to prevent any untoward incident.

The state had witnessed violence and arson from December 13 to 17 during protests against the new citizenship law. More than 600 people have been arrested so far for their alleged involvement in arson and violence in the state, police said.

In some places including Kochi, Wayanad and Kozhikode and Thiruvananthapuram the workers tried to break the police barricades and enter central government institutions, leading to minor scuffles with police personnel.

"It is a fight against authoritarianism and fascism. The government is using brute force to silence the people who are on the streets against the law meant to divide the people of the country on religious lines," Leader of Opposition in the state Assembly Chennithala alleged while addressing the protesters.

In Tamil Nadu, outfits affiliated to the CPI(M) including the Democratic Youth Federation of India, and Students Federation of India attempted to block trains at the MGR Central Railway Station complex in the state capital, leading to scuffles with police,

Communist Party of India veteran Nallakannu led the march to Raj Bhavan as part of the party's "besiege Raj Bhavan" agitation in which scores of Congress workers, volunteers of outfits including the CPI-affiliated All India Students' Federation, took part.

They were stopped near the Taluk Office Road-Little Mount point. Protests were held at Kumbakonam and other parts of Tamil Nadu as well by various outfits including Islamic bodies.

During his visit to Mangaluru, Yediyurappa also met representatives of Christian and Muslim communities, political leaders and officials.

He appealed for peace and said he has instructed the district administration to provide compensation to the families of the victims as per law.

Curfew is in place within the city commissionerate till Sunday midnight because of violence during Thursday protests. The chief minister promised relaxation in curfew.

Six people, including CPI Rajya Sabha MP from Kerala Binoy Viswam, were detained when they staged a protest in the city against the CAA defying curfew.

Police have restricted the entry of former Chief Minister Siddaramaiah in Mangaluru during the period of curfew.

Meanwhile, as many as 1,100 academicians and research scholars from various universities across India and abroad as well as prominent persons released a statement in support of the amended Citizenship Act.