In a conversation with Business Today, Capt Ashwani Tyagi, general secretary of SWIP, says that almost every employee at Jet will be participating in this initiative 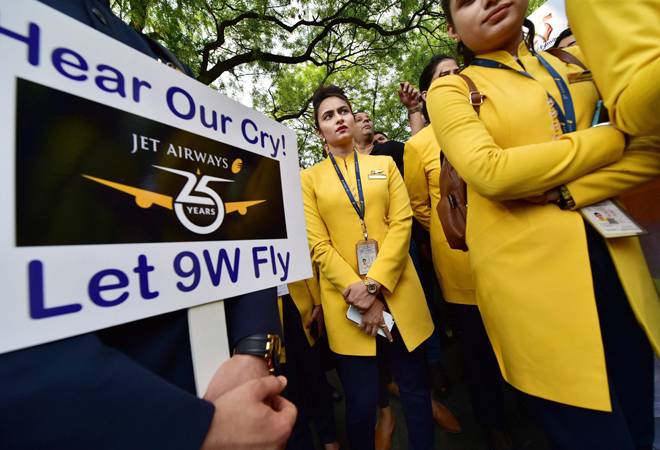 Jet's immediate funding requirement, as outlined in the resolution process in February, was about Rs 8,500 crore

Unlike the US and Europe, the management buyouts (MBOs) are rare in India and in nearly all the cases, they are carried out by private equity and venture capitalists. The recent proposal by the Jet Airways' employee unions to buy the troubled airline isn't, strictly speaking, an MBO, but this employees-led proposal is first-of-its-kind for the domestic aviation, and the Indian corporate sector as well.

Two employee unions at Jet - SWIP (Society for Welfare of Indian Pilots) and JAMEWA (Jet Aircraft Maintenance Engineers Welfare Association) - have written a letter to SBI chairman Rajnish Kumar asking to consider their proposal to take over the management control at the carrier. The letter, signed by two more Jet senior executives, says that the employee consortium and outside investors are ready to buy Jet. The consortium has offered to pay Rs 7,000 crore to lenders - Rs 4,000 crore from the employee stock option programme spread over five years, and another Rs 3,000 crore to be arranged from outside investors.

Also Read: Jet Airways employees: Who is hiring how many?

In a conversation with Business Today, Capt Ashwani Tyagi, general secretary of SWIP, says that almost every employee at Jet will be participating in this initiative. "Everybody wants this airline to run. It's a contribution, which will be coming from the salaries of the employees. We are giving a plan on behalf of everybody. We have given a letter to bankers. In the next stage, we will be explaining them the proposal and will listen to them also," he says.

Jet's immediate funding requirement, as outlined in the resolution process in February, was about Rs 8,500 crore. Since then, the funding gap has gone up substantially as Jet owes money to its vendors (ground handling, petrol companies), airport authorities, employees and passengers. Tyagi says that in order to restart the airline, the employee consortium will be offering Rs 3,000 crore that's going to come from outside investors. He didn't divulge the identity - whether they are HNIs or venture/PE funds - of these outside investors. "They will buy the equity in the company. We cannot disclose the identity of the investors at the moment," says Tyagi.

The proposal letter talks about not asking bond-holders of Jet for any haircuts. But, that seems difficult since the airline has an outstanding debt of over Rs 8,500 crore over and above the funding gap of at least Rs 8,500 crore. The amount offered by employee consortium would fall way short of meeting the debt obligations and the funding requirements. "We are discussing the matter with the banks. We have received a call from bankers. We are going to meet them. We are discussing among ourselves," says Tyagi.

Jet's sale process is expected to conclude by May 10, and investors like Etihad Airways, TPG Capital, Indigo Partners and government-backed NIIF have reportedly shown interest in buying the airline after lenders floated EoI (expression of interest) document last month. Recently, a UK-based aviation entrepreneur Jason Unsworth evinced interest outside of the EoI process. The airline temporarily shut down its operations in mid-April after it could not arrange for additional funding from lenders to operate planes. Before that, the airline's fleet was scaled down substantially from about 130 aircraft to seven. Its landing and parking slots have been given to rival airlines like IndiGo, SpiceJet and Vistara for a brief period. The lenders are now hoping for a suitor to buy this millstone around their neck.

It seems that the proposal by employees has been prepared in a jiffy and it seriously lacks in details. It's also not known whether the airline's senior management, including CEO Vinay Dube, backs such proposal. Besides the puzzling funding structure, there are some gaping holes in the proposal that might not pass muster with lenders, perhaps.

LPG cylinders price hiked for third time this year; here's how much it costs now