New investment proposals have been on a downward trajectory since late 2014.During the quarters ended September and December 2014, new investments were of the order of over Rs 6 lakh crore per quarter but since then it has fallen steadily and steeply In the quarter ended 30 September, 528 new investment projects worth Rs 98,961 crore were announced as per the preliminary estimates from CMIE. This however, is better than the 504 projects worth Rs 84,462 crore proposed in the previous quarter. However, it is 57 per cent lower on a year-on-year (y-o-y) basis compared to a massive fall of approximately 78 per cent in the June quarter of 2019/20.

With this, new projects announced during the first two quarters of the current fiscal at 1.8 lakh crore, remains the lowest in over 15 years. CMIE, however, expects these estimates to be revised upwards in the coming months by over 50 per cent.

New investment proposals have been on a downward trajectory since late 2014.During the quarters ended September and December 2014, new investments were of the order of over Rs 6 lakh crore per quarter but since then it has fallen steadily and steeply. In the past two quarters, it has stood below the 1 lakh crore mark, the minimum threshold level since the December quarter of 2004. The average new investment proposal made during a quarter in the previous two financial years was around 3 lakh crore. 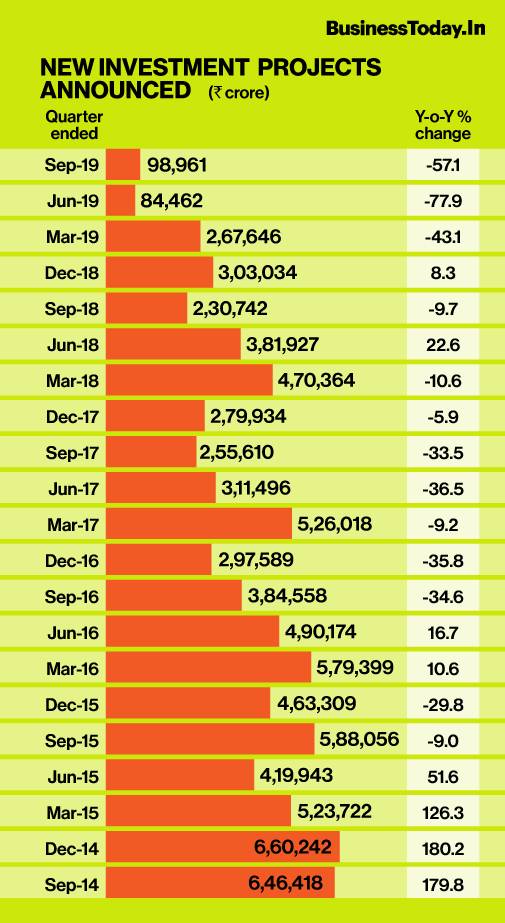 The fall in new investments is across public and private sectors but the fall was much sharper in case of private entities. Compared to the 57 per cent fall in overall investment proposals, the fall in private sector projects was much sharper at nearly 69 per cent compared to a 43.8 per cent fall in public sector projects, in the September quarter. This further translated into the lowest share of private investments in the past 13 quarters, in the overall new projects announced.

The average quarterly investments in the private sector during the first two quarters of this financial year was less than Rs 40,000 crore which is  expected to eventually rise to Rs 60,000 crore per quarter. Public sector investment proposals have remained below Rs 1 lakh crore since December 2018 and are currently down at an average of around Rs 52,000 crore in the past two quarters. 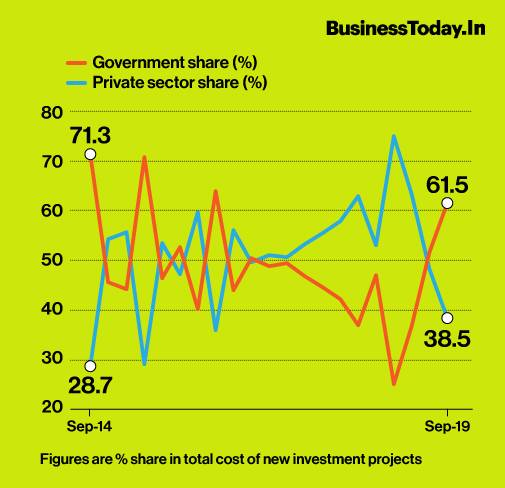 According to CMIE, heavy investment into the power sector proposed by government agencies, accounted for a massive 55 per cent in the total new investment projects announced in the quarter ended September 2019. New investments into the transport services sector, which includes roads, airports, ports and railways has dropped sharply in the past two quarter from a fall of 49 per cent in the March 2019 quarter to -87 per cent in September. In the quarter ended September 2019 the sector added up to only Rs 5,592 crore which compares very poorly against the average of over Rs 90,000 crore per quarter in past two years. Projects proposals in the hotel and tourism sector too dropped sharply from Rs 1,602 crore in the June quarter to Rs 102 crore in the September quarter. The relentless fall in new investment proposals - particularly in the private sector shows India Inc.'s low appetite for capital spends. 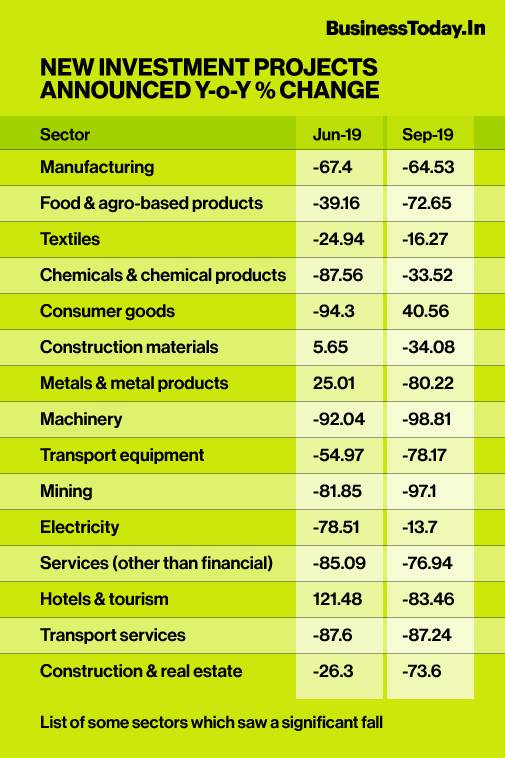