'Ban or not to Ban': Here's how Twitterati reacted to Tandav controversy

Tandav ban controversy: Social media users were divided on the issue of a likely ban on the show 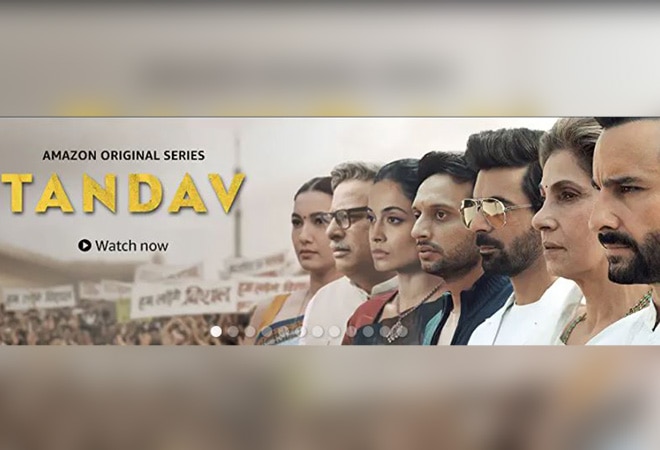 Ali Abbas Zafar-directed web series Tandav has been mired in controversy since its release. The Information and Broadcasting Ministry has now sought an explanation from the makers of the Amazon Prime Video web series. The Union I&B Minister took cognisance of the matter amid allegations that the political drama hurt religious sentiments.

BJP leader Manoj Kotak had written to the I&B Minister Prakash Javadekar seeking a ban on the show. BJP's Ram Kadam has also filed a police complaint against the web series for hurting religious sentiments.

The show has been at the centre of controversy due to a scene that features Mohammed Zeeshan Ayyub allegedly playing a character inspired by Lord Shiva, holding a trishul (Trident) at a college theatre festival in the first episode of the series. One of the actors in the scene talks about the character's social media traction and how he can amp it up by posting pictures or tweeting frequently. This is then followed by the contentious 'Azaadi' chants by the audience members.

However, social media users were divided on the issue of a likely ban on the show. While some supported a ban on the show for being 'Hinduphobic', others questioned any need for such a move.

Is this a Truth or just a
Propaganda???#TandavOnPrime#Tandav#Antihindubollywood#Hindupic.twitter.com/CRNq8Ne8tK

#BoycottTandav
This is the mockery of our religious belief. These film makers has been doing this kind of shit intensionally.

Why they are trageting hindu gods ?
Why they didn't use "prophet Mohd" instead of lord Shiva 🙏 . So boycott this. pic.twitter.com/CIQkjBXm5M

Even after so many incidents bollywood is not stepping back in defaming hindu gods and goddess in name of struggling actors fir baad mein bolte hain hm jobless hain aur out of jealous boycottBollywood krte hain.. #DontSpareSSRKillers#BoycottTandav#BoycottBollywoodpic.twitter.com/i0piZzEYIH

It is a series with Anti-Hindu propaganda. Insulting the hindu gods for their own sake. IT NEEDS TO BE STOPPED.#BoycottTandav

When you realise injustice, work is done.

I am not saying that this film is useless but why comedy is made every time by making fun of religion this is not right I think !! #Tandavpic.twitter.com/qhUfJpCXzD

Whilst we support Charlie Hebdo publishing Mohammad Cartoons in name of freedom of expression, we ask for ban on a 'fictional' web series that is hurting our 'sentiments' .
Educate me someone from creative field@vivekagnihotri#Tandav#TandavOnPrimepic.twitter.com/r2fUOivOik

'If you don't like it don't watch it.'
Yahi kaha tha na Judge Saab ne???#Tandav

T for #Tandav
T for #Terrific
Coincidence? I'd say not

Big ups to @WhoSunilGrover and @GAUAHAR_KHAN for their amazing performance. Your characters looked so real.

Meanwhile, the makers of Tandav have offered an unconditional apology for hurting public sentiment.

"We have been closely monitoring viewer reactions to the web series 'Tandav' and today during a discussion, the Ministry of Information and Broadcasting have informed us regarding a large number of grievances and petitions received on various facets of the web series with serious concerns and apprehensions regarding its content hurting the sentiments of the people," read an official statement from cast and crew of the web series.

"The web series 'Tandav' is a work of fiction and any resemblance to acts and persons and events is purely coincidental. The cast and crew did not have any intention to offend the sentiments of any individual, caste, community, race, religion or religious beliefs or insult or outrage any institution, political party or person, living or dead. The cast and crew of 'Tandav' take cognizance of the concerns expressed by the people and unconditionally apologize if it has unintentionally hurt anybody's sentiments," it further added.