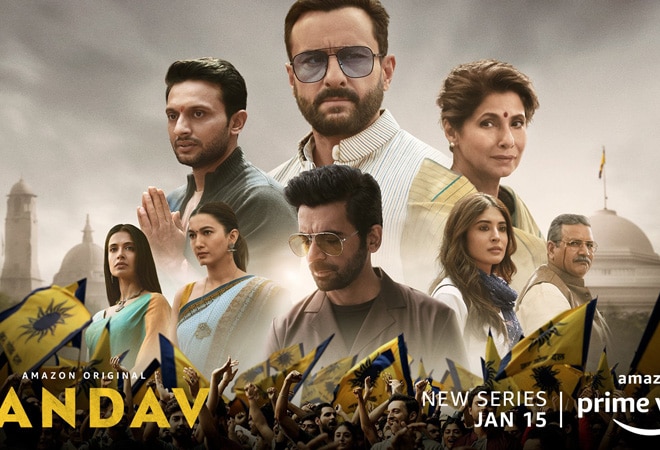 The Ministry of Information and Broadcasting has summoned streaming platform Amazon Prime Video following complaints that Hindu gods and goddesses have been ridiculed in the web series 'Tandav'.

The development has come after BJP MP Manoj Kotak wrote a letter to the I&B Minister Prakash Javadekar seeking a ban on the 'Tandav' web series.

The Mumbai North-East MP alleged that attempts are often made on such platforms to not show Hindu deities in good light. Sharing the picture of his letter to Javadekar on Twitter, Kotak said as there is no law or autonomous body governing digital content, and films on such platforms are full of sex, violence, drugs, abuse, hate, and vulgarity. "Sometimes, they also hurt religious sentiments," he added.

It seems that makers of 'Tandav' have deliberately mocked Hindu gods and disrespected Hindu religious sentiments, he said in the letter dated January 16.

Another politician, Ram Kadam, a BJP MLA from Ghatkopar West, also asked the director to remove the portion of the web series in which Lord Shiva is allegedly ridiculed.

Meanwhile, the makers of Tandav have offered an unconditional apology for hurting public sentiment.

"We have been closely monitoring viewer reactions to the web series 'Tandav' and today during a discussion, the Ministry of Information and Broadcasting have informed us regarding a large number of grievances and petitions received on various facets of the web series with serious concerns and apprehensions regarding its content hurting the sentiments of the people," read an official statement from cast and crew of the web series.

"The web series 'Tandav' is a work of fiction and any resemblance to acts and persons and events is purely coincidental. The cast and crew did not have any intention to offend the sentiments of any individual, caste, community, race, religion or religious beliefs or insult or outrage any institution, political party or person, living or dead. The cast and crew of 'Tandav' take cognizance of the concerns expressed by the people and unconditionally apologize if it has unintentionally hurt anybody's sentiments," it further added.

It must be noted that the government brought OTT platforms such as Netflix, Amazon Prime Video and Disney+ Hotstar, besides other online news and current affairs content, under the ambit of the Ministry of Information and Broadcasting in 2020, giving it powers to regulate policies and rules for the digital space.

Filmmaker Ali Abbas Zafar has created, directed, and produced the political drama with Himanshu Kishan Mehra and it is written by Gaurav Solanki, best known for 'Article 15'.