Festive spirit! 56% families are spending more but not on big-ticket goods: Axis My India survey

Despite the festive spirit, consumers are preferring small purchases. Around 46 per cent of families said they'll shop clothes over big-budget items on Dussehra or Diwali.

Around 33 per cent of respondents said they'll buy electronics online, but high-value items like jewellery and groceries are being bought physically, the survey shows. Photo: Reuters
BusinessToday.In

Consumer sentiment currently reflects a "festive spirit", and spendings have increased for 56 per cent of the families, according to the India Consumer Sentiment Index (CSI) -- a trend analysis brought out by the market research firm Axis My India. However, these spendings will be more inclined towards buying smaller items as opposed to expensive ones.

The increase in household spending over the past three months was the highest in the western region, considering the Ganesh Utsav festival, the survey showed. 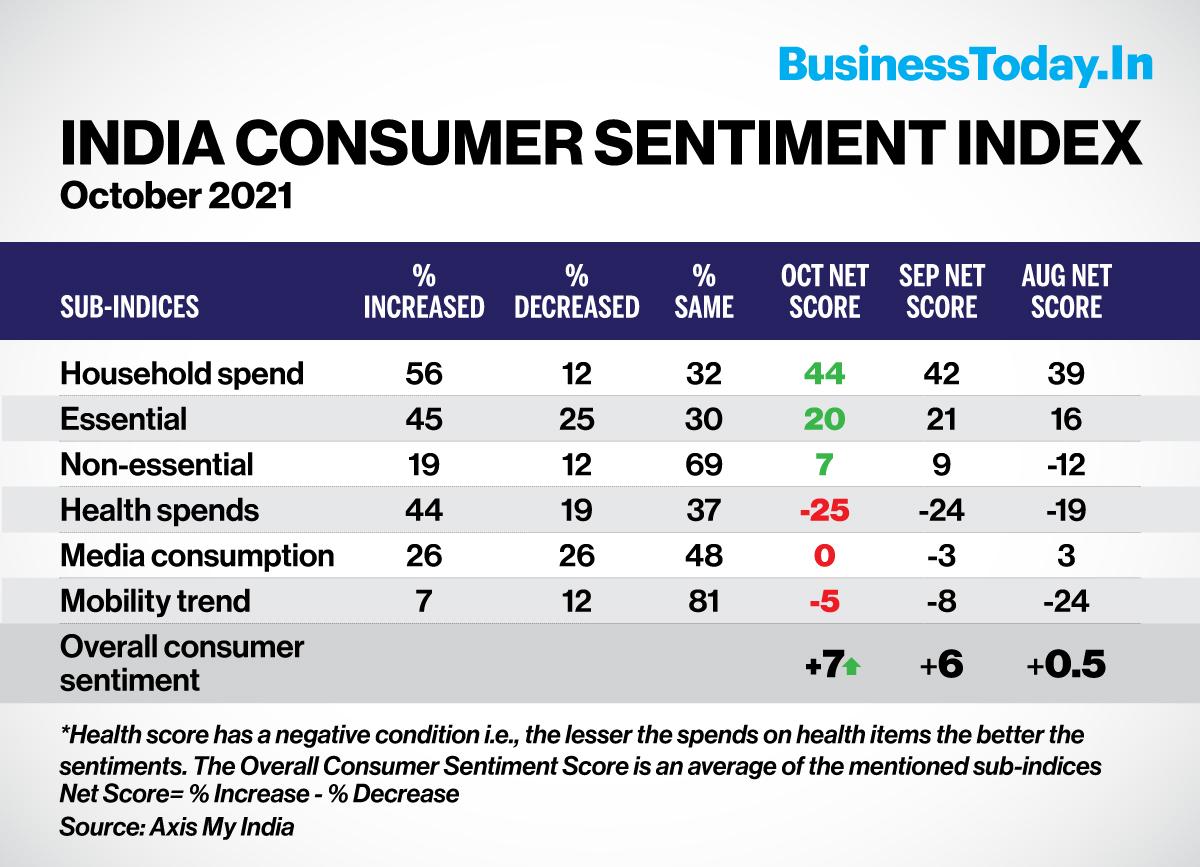 It found rural consumers are going out more, with mobility increase being the highest in rural India -- from 61 per cent in July to a massive 87 per cent in September.

Despite the festive spirit, consumers prefer small purchases over big-ticket goods, it found. As per the findings, around 46 per cent of families said they'll shop clothes over big-budget items on Dussehra or Diwali. 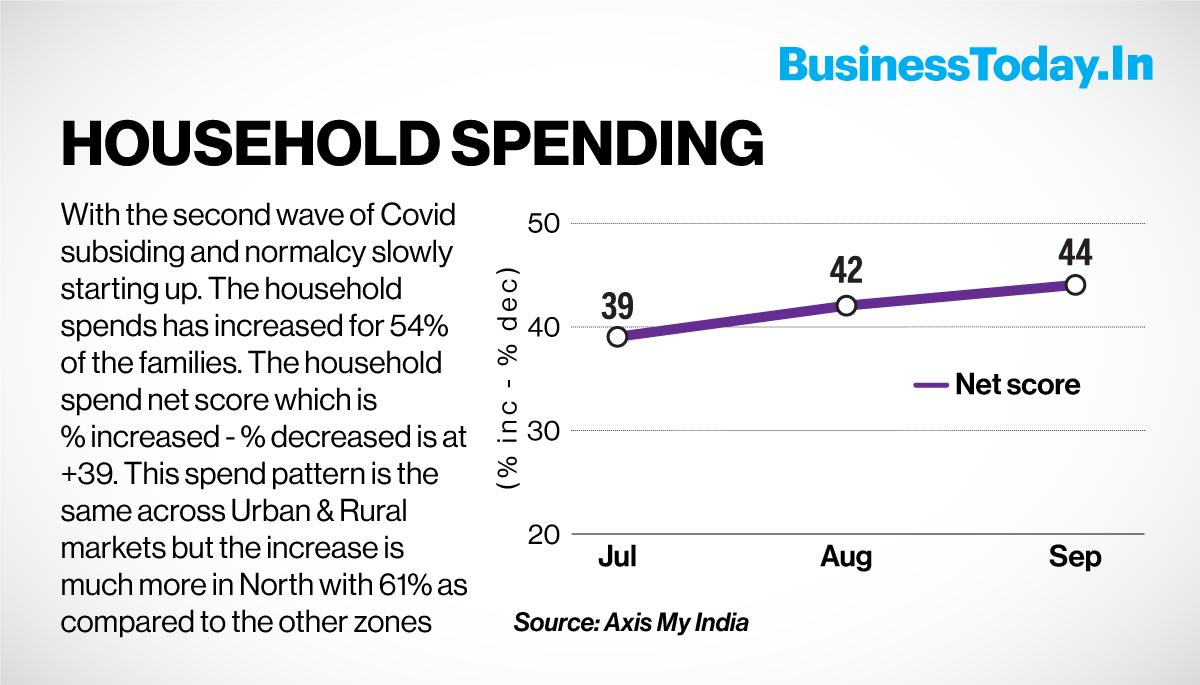 Around 33 per cent of respondents said they'll buy electronics online, but high-value items like jewellery and groceries are being bought physically.

As per the CSI, media consumption either increased or remained the same for 74 per cent of respondents, with the highest increase was seen in the 18-25-years age group. 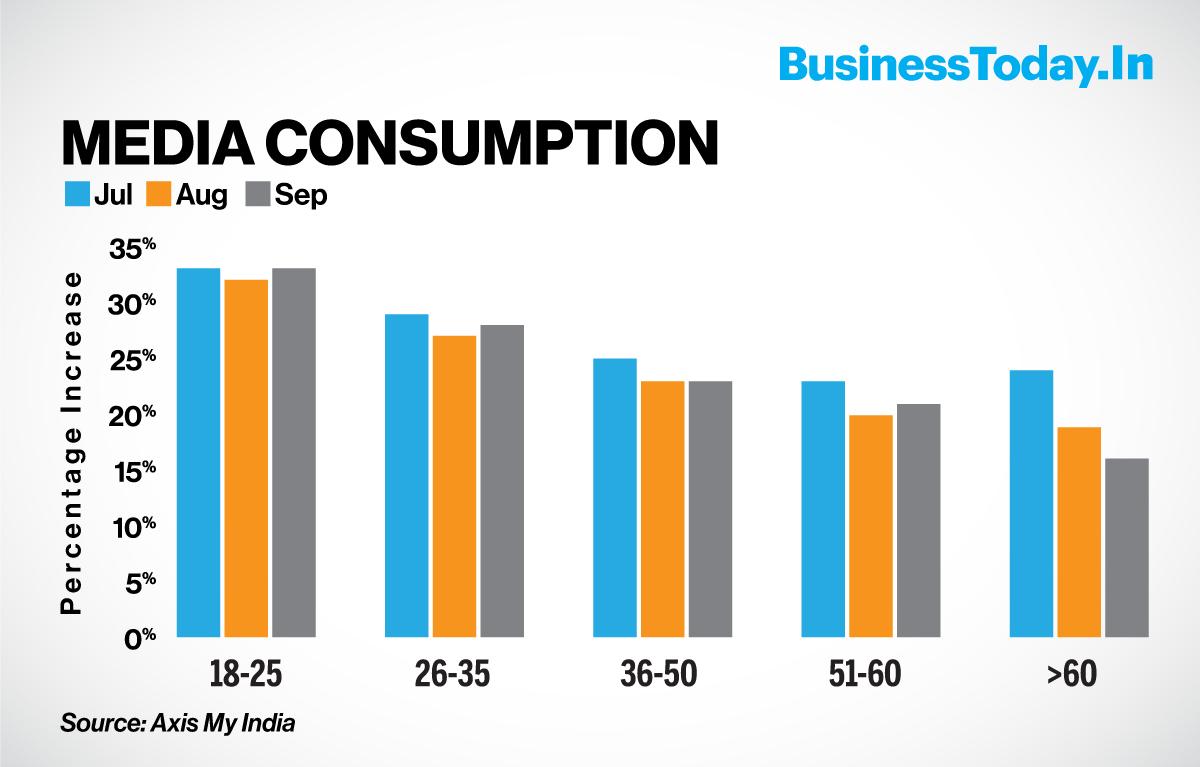 While spending on personal and household care reflects a gradual increase, the survey showed that Covid-19 has had a huge impact on non-essential sales in September, and with the fall in cases post the deadly second wave of the pandemic, there has been a gradual increase in spendings.

In the media consumption category, the increase in consumption was the highest in the 18-25-year-old age group. However, with people slowly starting to go out and offices opening, the number is coming down, especially in aged people.

In terms of mobility, it has increased post the second wave and over the past three months, the increase was the highest across rural India, the index shows. Furthermore, 83 per cent of respondents said they were not planning to travel or go on a holiday this year, while 15 per cent said they would only travel domestically.