Every penny counts. That is true for Union Budget as well, where you have to cover all segments of the society or the economy. The biggest outlay goes to major schemes like employment guarantee, defense, railways and 120 more schemes. Every scheme has a purpose and it gets an allocation in the Budget. There are some interesting facts in the Union Budget 2019-20 presented today by finance minister Nirmala Sitharaman if one compares it with the interim budget penned by her predecessor Piyush Goyal in February this year. The Budget is for the same period 2019-20, but there are some figures where numbers are vastly different.

Swachh Bharat Mission scheme has seen a cut of Rs 106 crore in just a matter of four months. Goyal's Budget has provided for Rs 12,750 crore as against Sitharaman's allocation of Rs 12,644 crore (see table).

This is one of the most popular schemes of the BJP-led NDA government. In fact, the chief economic advisor K Subramanian has written a whole chapter on behavioural economics with Swachh Bharat Bharat Mission, where the people came forward to help the government in this drive.

Surprisingly, the government has also effected a marginal cut in the jobs and skill development outlay from Goyal's Rs 7,511 crore to Sitharaman's Rs 7,260 crore. The opposition went tongue and hammer after the government on the issue of jobs.

Similarly, North East, which has been a focus area for the current government right from the start, saw the biggest cut in the central pool of resources. The budgetary allocation from Goyal's budget to Sitharaman's budget has been cut by Rs 400 crore to Rs 531 crore. In fact, the BJP managed to form government in Northeast along with allies in some states.

Green revolution is yet another area where allocation has been cut from Rs 12,612 crore to Rs 12,561 crore. The funding cut in these popular schemes have been transferred to other schemes. In all likelihood, the government may spend more next year or later. 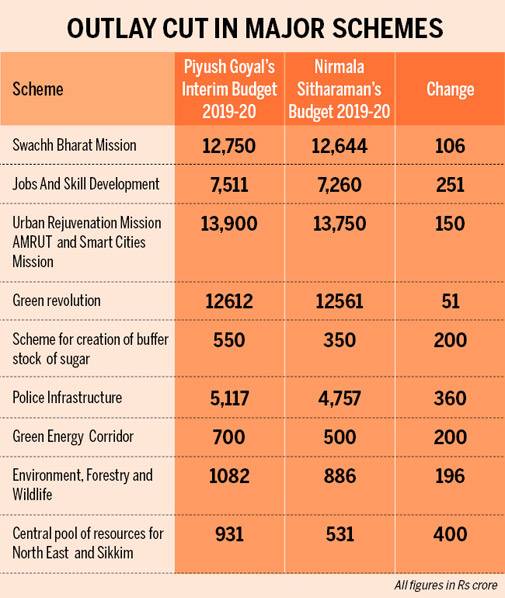 Also read: Chidambaram says Modi 2.0 budget 'bereft of any reforms', says CEA must be most disappointed

Budget 2019: We are against cash transactions, says Nirmala Sitharaman