Relief is long overdue. In fact, it's inevitable. Middle class has borne the brunt of the plateauing of incomes in the past 4-5 years even as inflation has continued unabated 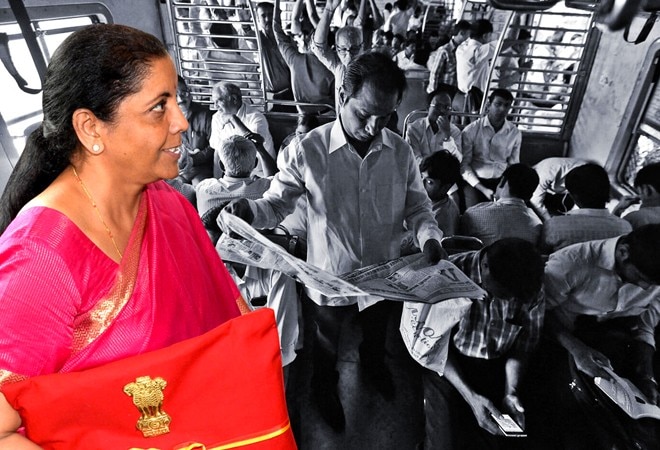 It's time Finance Minister shifts her attention towards the middle class

If Modi II's Interim Budget was aimed at farmers and the poor, Nirmala Sitharaman's Budget 2019 and subsequent announcements were for businesses and corporates, Budget 2020 has little choice but to focus on the only section largely neglected in both the previous Budgets-the Indian middle class.

In many ways, that's inevitable. After all, middle class has borne the brunt of the plateauing of incomes in the past 4-5 years even as inflation has continued unabated. A relief is long overdue. And now Centre's surprise move to slash corporate tax rate to 22 per cent - and even lower 15 per cent for new manufacturing companies - renders the prevailing higher personal income tax rates virtually untenable.

FM will be under pressure to rejig personal taxes to leave more disposable income in the hands of individuals and trigger consumption/demand teetering at a seven-year low.

Neither Piyush Goyal's Interim Budget nor Nirmala Sitharaman's first budget in 2019 appeared convinced about reviving consumption before attempting to trigger an investment cycle in the economy. At a time when GDP growth was slowing due to lack of demand/consumption in the economy, both the Budgets obsessed over the Chinese model of investment-led growth. Both aimed at bombastically reviving 'animal spirits' in the economy at a time when businesses had no appetite for fresh investments because utilisation of existing capacities was barely two-thirds. It was hardly surprising then that both have failed miserably.

Wrong diagnosis has cost the Indian economy at least four aimless quarters since then and further deceleration in GDP growth which is yet to be arrested. It's time to right the wrongs. So what are Sitharaman's options to give confidence to the middle class to spend?

Raise basic exemption limit: Unchanged since 2014 at Rs 2.5 lakh, basic exemption limit was raised to Rs 5 lakh in 2019 only for those earning up to Rs 5 lakh. Raising it to Rs 5 lakh across the board could leave considerable disposable income in the hands of individuals to spend-a trigger Centre has been hoping for. It impacts 5.5 crore tax payers directly and could prove to be a huge incentive for consumption.

Standard deduction: Re-introduced in 2018, Standard Deduction is meant to level the playing field between the salaried class and the business class by providing salaried individuals fixed exemption on expenses that businessmen claim as part of expenses for doing business. The current limit of Rs 50,000 can be raised to Rs 75,000 instead.

Full repo rate transmission: Since the time RBI began slashing repo rate in 2014, a substantial 0.9 pc of repo rate cut still remains to the transferred by India's banking system to the consumers and businesses. Centre will need to nudge banks-the largest of them being public sector banks-to ensure full transmission to make purchases affordable and revive demand.

Long Term Capital Gains: Given the government's finances, this may not happen. However, if it does, it would be a major confidence building measure. Since April 1, 2018, capital gains on shares held for a year or more are exempt up to Rs 1 lakh of gains. There is a wild expectation that this limit should be raised to Rs 2 lakh instead.

For businesses--especially, foreign businesses-there appears to be a consensus building in favour of taxing dividends at the hands of individuals instead of the companies. Foreign firms, in particular, have not been able to set off the Dividend Distribution Tax (DDT) in their parent jurisdictions. As a result, the 20 per cent DDT has been a major disincentive to invest in India. It will benefit investors as they will receive higher dividends without deduction which they can offset against their income.

Government is expected to take forward the digital India initiative by incentivising digital payments under GST with set-offs against tax due.

It's a move that will raise cost of products for consumers but will draw investments in these industries.

Sin goods, including cigarettes will remain targets of the Centre to make up for any shortfall in revenue. Aviation turbine fuel is likely to see flat excise duties instead of ad valorem rates being charged right now.

ALSO READ:Budget 2020: What FM Sitharaman must do to revive economy, consumer demand

Finally, given the state of Centre's finances and limited leeway, this Budget will be watched more for its messaging than for sops. It's an opportunity for the FM to declare the government's intent on many fronts. For instance:

Even though GST rates are purely the domain of the GST Council, the FM may still be within her right to declare the government's intent to cut the multiple GST rates down to three, at best, as originally planned.

Given the reasonable success of the amnesty scheme 'Sabka Vishwas' launched last year for resolution of indirect tax disputes (it garnered Rs 35,000 crore and resolved disputes in 1.61 lakh cases worth Rs 80,000 crore of dues), there's reasonable expectation of an amnesty scheme for indirect taxes as well, especially to unclog cases in Customs. It could unclog up to Rs 6-7 lakh crore of pending disputes, freeing up precious resources for investing in the economy.

Finance minister may also wish to convey Raid Raj would ease since businesses see it as government's desperate attempt to shore up low growth in tax collections; that White collar offences will be de-criminalised; that despite a slowdown in public investment in the second half of fiscal 2019-10, Centre would continue to drive public investment since it's the only engine of the economy that's functioning; and that new fault lines emerging in the banking system will not be allowed to spread. Approximately Rs 30 lakh crore (about one-third of total loan outstanding) appears to be at risk in agri loans, unsecured retail loans, Mudra loans and outstanding loans to telecom firms.

As for fiscal deficit, it's projected to be upwards of the targeted 3.3 pc, more likely in the 3.8 pc range. But that may be a small price to pay to turn around the economy, create jobs and revive investments.