The automotive dealer fraternity in India, which is facing the brunt of the contraction of demand for vehicles in the wake of the coronavirus pandemic, has sought higher margins from companies of at least 7 per cent without which they say the business would become unviable.

The umbrella association for auto dealers in the country Federation of Auto Dealers Association on Wednesday released the break up of the dealer margin for various companies in India as also the reference figure for other markets around the world. "Automobile dealers in India operate on the lowest margins possible as compared to peers globally," said Ashish Harshraj Kale, President, FADA. "Even this margin has been battered due to the slowdown in the last 15 months and many dealerships are operating at a loss. While volumes have dropped substantially, fixed costs have remained more or less the same." 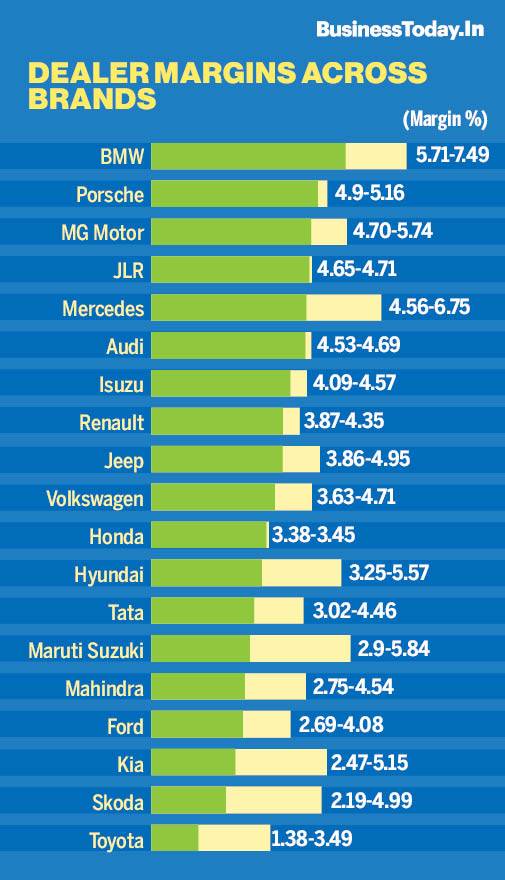 Sale of automobiles in India contracted by 17 percent in 2019-20, the steepest decline in over two decades. With the lockdown impacting businesses further, estimates suggest sales may contract by another 35 per cent in the current fiscal which would push back the industry by a decade to levels last seen in 2010.

"These are unprecedented times and unless some action is taken, the industry will not survive," Kale said. "Our demand for a fixed margin of 7 per cent is not unreasonable."

The ability for companies to accede to this demand varies from one to the other. India is a peculiar market where 2-3 players corner bulk of a segment leaving the rest with very small pie of the market. In passenger vehicles, the top three companies - Maruti Suzuki, Hyundai Motor and Mahindra and Mahindra - command over 75 per cent share of the market, leaving the last quarter for the rest of the players to fight over. That's 18 companies fighting for a 25 per cent share. Similarly, in commercial vehicles and two-wheelers the top two players account for 70 per cent and 65 per cent of the market, respectively. This top heavy structure makes it difficult for smaller players to make money and in turn offer bigger margins to dealers as the scale is less.

"It is a matter of volumes. A dealer can make more money with a Maruti on a lower margin because he gets to sell way more cars with that brand. Even with a higher margin, he will make a loss with a company like Nissan because the volumes are so low," says an industry insider. "If you look at the balance-sheet of most companies, beyond the top five, not many are making money and are dependent on support from parent companies. What the dealers are asking for is valid but the ability for everybody to help them out is not the same."

The slowdown has already seen more than 300 dealers shut shop in the last two years leading to loss of employment for more than 200,000.